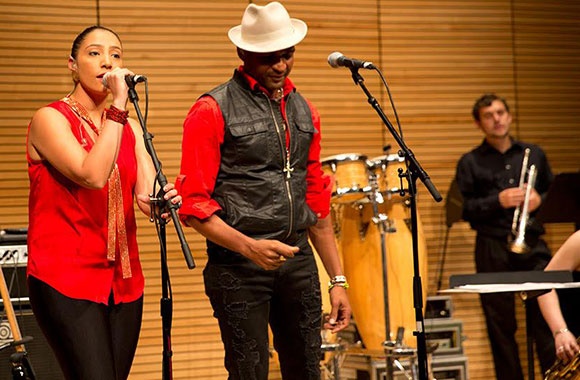 Providence, RI: The inaugural Brown University Latin Jazz and Pop Festival will bring some of the most exciting performers in contemporary Latin music to Providence, RI for five nights in October as a celebration of National Hispanic Heritage Month. In addition to showcasing local musical talent, the festival features Cuban vocalist and composer Descemer Bueno, who won three Latin Grammy Awards in 2014, including “Song of the Year” for “Bailando,” and the Grammy and Latin Grammy-nominated Afro-Cuban funk group PALO! Other festival highlights include master percussionist and vocalist Pedrito Martinez, who has recorded or performed with Wynton Marsalis, Paul Simon, Paquito D’Rivera, Eddie Palmieri, and Bruce Springsteen, among others, and whom Quincy Jones praises as “the real thing.” The festival closes with Indie Latin folk rocker Gina Chavez, who swept the 2015 Austin Music Awards, winning “Musician of the Year” and “Album of the Year.” You will not find a Latin musical line-up as powerful as this one anywhere north of Miami!

The festival also features a talk about the broad cultural impact of Latin music in the United States by musicologist Ned Sublette, author of the definitive Cuba and Its Music, and a panel on contemporary Latin jazz and pop with Martin Cohen, founder of the Latin Percussion (LP) brand of percussion instruments. Emmy-winning director Joe Cardona will make a PBS film about the whole festival entitled Ivy League Rumba.

“Hosting these world-class musicians offers an excellent opportunity for our students and the broader Providence community to hear some of the most exciting artists in Latin music today,” said Richard Snyder, Director of the Center for Latin American and Caribbean Studies (CLACS) at Brown University. “The performances, workshops and talks by experts on contemporary Latin music will open a unique window on the creative processes that make Latin culture such a dynamic and vital force. By engaging the large Latino community in Rhode Island, in addition to Brown students, the Festival will make a major contribution to the Center's outreach mission.”

All performances and talks will be free and open to the public. For tickets and more information, including biographies, video clips, performance times and locations, please visit www.brown.edu/clacs. Festival co-sponsors include the Botín Foundation of Spain, the Office of the Vice Provost for the Arts, the Creative Arts Council, the Department of Music at Brown University, and RI PBS.