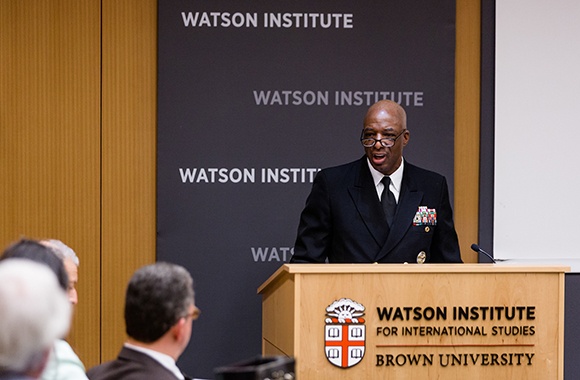 “If you believe that you have to be on top of everything always and forever…you are going to suffer an unaccustomed and unexpected collapse… the desire for more power actually attracts greater security threats."

Civil-Military Relations Reconsidered: Can the civil-military gap be bridged?

Panelists from Brown University’s Watson Institute and the U.S. Naval War College discussed the role of the American military and its relationship with the American public.

The recent Atlantic cover article by James Fallows, “The Tragedy of the American Military,” highlights a growing divide between civilians and military personnel, the result of which is a lack of understanding and scrutiny that lessens the effectiveness of the US military and makes it easier for political leaders to go to war. The article has sparked important discussion and debate among scholars, policymakers, members of the military and the general public, providing an opportunity for experts from the U.S. Naval War College and the Watson Institute to convene this week to take up the issues and ideas raised in a two-panel session titled, In and Out of Uniform: Civil-Military Relations Reconsidered. An unanticipated highlight involved the author of the Atlantic article, himself, who joined the discussion through Skype for the finale of the event.

“We see this as the first of what we expect to be many collaborative events,” said Richard Locke, director of the Watson Institute, to the audience, to explore critical security issues with the Naval War College.

John Garofano, Dean of Academic Affairs at the Naval War College, opened the session by summarizing the Fallows thesis – that America loves its military but doesn’t take it seriously, and therefore, does not provide the scrutiny necessary to make it more effective, and  perhaps even to prevent unnecessary wars.  “America is reverent but disengaged.”

The first panel focused on the current relationship between American society and military service. Lindsay Cohn, an Assistant Professor of National Security Affairs at the U.S. Naval War College, addressed the characteristics of the civil-military gap, seeking to dispel a number of predispositions towards the military. For example, she emphasized that that low-income individuals are not overrepresented in the military, and the South and West are overrepresented only slightly.

Cohn also revealed that almost 60 percent of the American public has a family member or a close friend who has served in Iraq or Afghanistan—noting that the effects of the statistic are complicated, since this does not necessarily lead to a preference for foreign policy restraint, as some would believe. Ultimately, Cohn argued that broadening recruitment and encouraging more veteran representation in public office could help bridge the civil-military gap. “Healthy civil-military relations require ongoing debate,” she said.

Cook emphasized that the American military—and the public’s relationship with it—has changed over time. “Recent wars,” he said, “have shown…a military that is respected and honored at a distance, coupled with great [civilian] disinterest in what military people do, how they are used and the costs imposed upon them.” That disinterest, Cook claimed, means that the military can “be used with impunity by the executive branch.”

Julia Stern ’08 of The Service Project explained that this disconnect, in part, comes from media. “While these American Sniper or Zero Dark Thirty movies…portray a very specific segment of the military, they are very ‘Hollywood,’ and that is not the experience that everyone shares,” said Stern, “so the American public…gets a very specific and biased view of what the military actually is.”

Similarly, Catherine Lutz, Professor of Anthropology and International Studies and director of the Costs of War project at Watson, said that because “the public is mainly exposed to the spectacular rather than the normal injuries of war,” there is often a misunderstanding of the actual costs of war.

Lutz spoke on the media’s descriptions of war weariness, a measure of discontent with conflict. The public is twice as likely to be described as war weary, she said, than the military. However, war weariness “depoliticizes the experience of the use of force,” said Lutz.

When asked about how the civilian-military gap can be bridged, Cook lamented that “civilians are much more content to thank you for your service and shake your hands than really ask: What did this mean to you?”  He emphasized that those walls need to be broken down. Cohn added that changes in recruiting incentives and areas and education reform were also needed.

During a second panel investigating the role of military forces in American foreign policy, Stephen Kinzer, an award-winning journalist and Visiting Fellow at Watson, said that the face of war will change as the U.S. increasingly faces forces that are “religiously based, ethnically based, regionally based or simply criminally based” instead of traditional state armies and as military contractors and private armies become more common.

Kinzer also remarked that warfare means not just understanding strategy and technology, but also understanding culture. “That is one of the big lessons,” he said, “We also have to understand what it means to be a force that’s not from here.”

On the role of the military, Kinzer believes that the perception of the U.S. as the world’s policeman needs to change. “If you believe that you have to be on top of everything always and forever…you are going to suffer an unaccustomed and unexpected collapse… the desire for more power actually attracts greater security threats,” he said.

Director of Professional Programs and a Faculty Fellow at the Watson Institute Keith Brown also commented on the changing nature of war, stating that the composition of the military is increasingly complicated, with civilian soldiers such as the National Guard and Reserves more active in recent conflicts, and with contractors, locals, journalists and military professionals all at combat sites. Although, quoting an army veteran's view, he said that “[civilian] people are, as they inevitably will be, disconnected” from the military, he advocated for continued investment documenting the costs of war.

Captain Robert Sanders, a Military Professor of Joint Military Operations at the U.S. Naval War College, explained the efforts in Iraq and Afghanistan as trying to “bring about a reality that conceptually is something different,” victory against non-state actors can be difficult to define. “We won the kinetic fight, achieved the military objective; but to win the war, establish the desired political end state other instruments of national power beyond military power are also required.”

The panel closed with Captain Thomas Fedyszyn, a Professor of National Security Affairs at the U.S. Naval War College, who sought to establish a relationship between military budgets and morality. Fedyszyn commented on the imbalance between objectives and capability, arguing that insufficient budgets can jeopardize military personnel or force the military to change practices in ways that can negatively impact personnel, such as extending deployments. Fedyszyn also commented on the civil-military gap, observing that “few…Ivy League [students have] volunteered for public service.”

Fallows then joined in, thanking the participants of the panel for delving into what he called “a topic that deserves further notice.” Fallows reiterated his concern regarding “the paucity of policy engagement between the policy making public and the professional military,” and its problematic implications, ultimately concluding that “for the nation as a whole, we have chosen engagements as a whole that have not been winnable.”

The event closed with the Watson Institute and Naval War College noting potential follow-on initiatives to explore questions discussed, and inviting the public to continue engagement on these important issues.