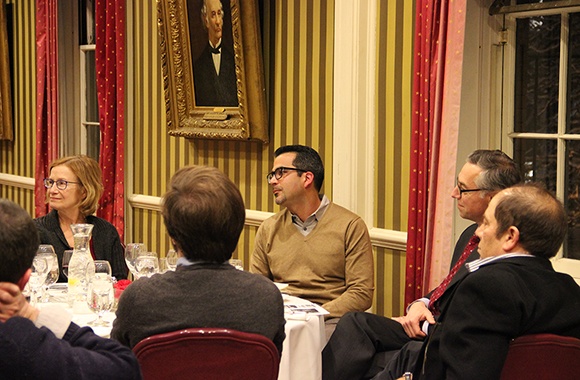 “Watson is a place that values not only the academic contribution we are making with our work, but asks why it matters: what are the political, moral, and practical implications? People here aren't afraid to say that they … want to make an impact in the world."

Cream of the Crop

Walk the halls of the Watson Institute. Hear that sound? That’s the hum of energy given off by 11 of today’s top young social scientists.

These scholars, who arrived in July 2014, are the first cohort of Watson Postdoctoral Fellows. Establishing the program was one of Director Richard Locke’s first initiatives and is central to the Institute’s strategic plan. Modeled after the best programs in the country, the newly invigorated Watson Postdoctoral Fellows Program was launched with several goals in mind. According to Keith Brown, a Watson faculty fellow and the program’s executive director, those goals are being met.

“First, we wanted to establish the Watson Institute as a destination – a place that people naturally think of when they’re applying to postdoc programs at Harvard and Michigan,” Brown says. “And I think we’ve done that, given the number and quality of applicants and the types of places that people are applying from. The word is out that Watson is a great place to be.” In this year’s application cycle – its second – the program received about 250 applications for seven slots. That’s a selectivity rate of about three percent.

The candidates who will join Watson this July, like the cohort before them, were selected based on “the richness of the questions [they] are asking,” as well as their willingness to think outside disciplinary silos, Brown says. Catherine Lutz, a professor of anthropology and the program’s faculty director, concurs. “They’re recreating in new ways the interdisciplinary ethos we have here.”

Another objective was to recruit people who would add to the Institute’s sense of intellectual community and excitement. Again, the program is already succeeding: according to Richard Locke, the Director of the Watson Institute, the current postdocs “have helped transform this place into a busy intersection of people and ideas. The energy and intellectual curiosity of this group of young people are infectious.”

Lutz sees long-term benefits, too. “The postdocs are going to be ambassadors of Watson. Thanks to them, some of the best scholars in the country will be networked back to collaborate in research endeavors with people at Watson. They’ll send us their best graduate students in the future.”

The program offers real benefits to the postdocs, as well – not least of which is “professionalization.” “We’re helping them establish their publications, their profession identity, their professional skills,” says Lutz. “We work with them on CV building, moving forward with writing projects, public speaking skills.”

Indeed, one requirement is that each postdoc present his or her work at a series of dinners and lunches, which senior faculty attend as well. These events are for “early idea-sharing and solidarity-building, exchanging ideas, in a different way from the corridors,” says Brown.

Janice Gallagher, who studies judicial and human rights outcomes in the context of state-civil society relations, recalls her turn at the monthly Works in Progress.

“Presenting my work at Watson gave me the opportunity to get feedback from political scientists, anthropologists, sociologists – who all hold a common commitment to interesting, relevant work. … As a very junior scholar I felt challenged and engaged with, and fundamentally respected and valued. This balance of support and rigor, within the context of a common commitment to doing work that matters, makes Watson a productive and supportive place to work and think.”

For Eoin McGuirk, who earned his PhD from Trinity College in Dublin and studies the intersection of political economy and development in Africa, being a Watson Postdoctoral Fellow is a perfect fit.

“Three features leaped out at me from the start,” he says. “First, that it was quite obviously a thriving and vibrant intellectual community on a clear upward curve; second, that the foci of its scholarly output – development, governance and security – were precisely the areas of research that I care about the most; and third, that the Institute was committed not only to enriching our understanding of first-order global problems, but also to bringing this research to the attention of policymakers and the general public. It's rare for a young researcher to be exposed to all three of those aspects in their first position out of grad school.”

This commitment to relevance resonates strongly with Gallagher. “Watson is a place that values not only the academic contribution we are making with our work, but asks why it matters: what are the political, moral, and practical implications? People here aren't afraid to say that they … want to make an impact in the world. People … set the bar high for rigor and relevance and are able to look beyond the narrow debates that so often make it difficult to talk across disciplines and methodologies.”

Through their research and teaching, Locke says, “this exciting group of younger scholars is helping us develop the human capital and community we need to make a difference both here at Brown and beyond. The seminars showcasing their research are among the most intellectually rich and engaging activities I have attended since arriving at Brown.”