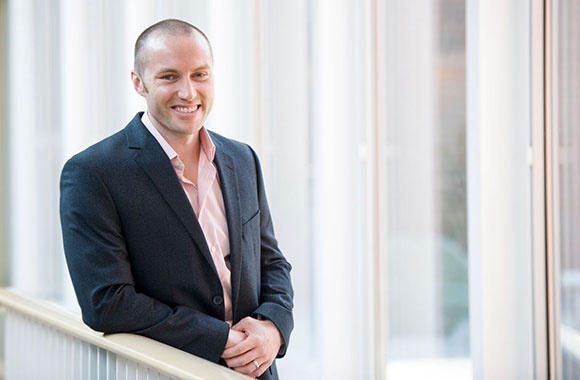 “Police are generally reviled in Liberia if they’re known at all. They’re viewed as inaccessible and irrelevant or as predatory and corrupt.”

Restoring Trust in the Police and Government Institutions after Civil War

“Serendipitous” is how Rob Blair describes his career path.

The Joukowsky Family Assistant Professor of Political Science and International and Public Affairs, new to the Brown faculty this fall, focuses his work on “peacebuilding and statebuilding after civil war, with an emphasis on rule of law and security institutions,” and is currently teaching a seminar, “Post-Conflict Politics.”

As an undergraduate at Brown, where he concentrated on Education Studies, Comparative Literature, and Creative Writing, he seemed to be heading in a different direction. After graduation in 2006, a Fulbright Fellowship took him to Colombia to work on a teacher-training project involving new curriculum for children affected by the violence between Colombian armed forces and rebel groups. Halfway through the Fulbright he realized that he could complete a master’s degree at the Universidad de Los Andes in Bogotá as part of the Fellowship. It came down to “a coin toss” between two one-year programs: Journalism and Resolution of Armed Conflicts. He chose the latter, “but I did not envision this as a long-term trajectory for me,” he says.

Fast forward to Yale (the program that his advisor in Colombia had recommended), where he spent the next six years as a Political Science PhD student and Post Doc. Most of his fieldwork during that time took place in Liberia. “That was also very serendipitous,” he says. He worked as a research assistant for development economist Chris Blattman, and that first summer, Blattman asked him to work on a project he was evaluating in Liberia on reintegration of ex-combatants into civilian life. “A lot of these guys remained in networks that had been established during the Liberian Civil War, 1998 to 2003,” Blair says. Many were working in artisanal diamond and gold mines. “It’s such hopeless work,” he says. “A tin of rice is their daily wage, plus a cut of anything they find, but it’s so rare for them to find anything.” Because the work was so low-paying and transient and because these ex-soldiers were living in groups, they were easily recruited as mercenaries for conflicts across the border in Cote d’Ivoire. The idea behind this NGO-initiated program “was to get them out of the mines and into more stable employment.”

Although Blair had previously traveled in Latin America, Southeast Asia, and East Africa, he found Liberia a bewildering place. “I left with infinite questions,” he says. “It seemed ideal as a place to do dissertation research because I felt that I could really spend the next four or five years trying to figure out what the hell is going on in this country that I find I really don’t understand at all.”

Since then, Blair has returned to Liberia numerous times. All told, he’s spent about a year and a half there, including weeks at a time hanging out with ex-soldiers in the mines. “They would teach me, here’s how you jig for diamonds,” he says. “They were all laughing, ‘let’s show this white dude what we do.’” Some of his research took him way out in the bush to small villages—“places where you would drive for seven hours, then take a motorbike for an hour, then walk for two hours.” A paper published in 2014 (with Chris Blattman and Alexandra Hartman) in American Political Science Review evaluated a UN program aimed at strengthening legal informal institutions for resolving disputes. Other methods include trial by ordeal, which Blair says is now illegal, though still common in rural areas: “If you’re accused of a crime,” he says, “a medicine man will heat up a machete and press it next to your skin. If you burn, you’re guilty, if you don’t, you’re innocent.” The paper concluded that while the program greatly helped mediate problems like land disputes, it had the adverse effect of increasing reliance on trial by ordeal and other forms of extrajudicial punishment.

Perceptions of the Police

This result encouraged Blair to examine the flip side of the project: working with the police. He is currently evaluating a Liberian government program called “Confidence Patrols” that’s getting officers out into rural areas that haven’t ever had a police presence. “Police are generally reviled in Liberia if they’re known at all,” he says. “They’re viewed as inaccessible and irrelevant or as predatory and corrupt.” The officers go into villages for what’s essentially a meet and greet, explaining what they do, then return to the same village several more times. “For a lot of people there’s not even a sense of what function they serve,” says Blair. Though the data isn’t in yet, transcripts from the meetings show a softening of resistance to the police over time. He predicts that due to the program there’ll be less crime, less domestic violence, and less reliance on institutions like trial by ordeal. But he doesn’t know for sure. He says he prefers evaluating programs when “It’s not obvious that all the effects are going to be positive.”

His trips to Liberia are shorter now (“I’ve definitely done my time,” he says. “I ran out of steam for that kind of fieldwork.”). Now his research is shifting back to Colombia, to remote, off-the-grid areas previously controlled by rebel groups, where the distrust of police is even higher than in Liberia. “My experience is very circular in a lot of ways,” he says. “I’m sort of returning to the same themes, in slightly different ways, and to the same places.” The program he’s evaluating involves “police inspectors” hired by the government to act as liaisons between these communities and the police in an attempt to win people’s trust and change their perceptions.

“It’s interesting because political scientists really don’t study the police as an institution,” he says. “We’ve sort of ceded that to criminologists. But we all know that this institution really matters….restoring trust in the police is a key part of the post-conflict, peacebuilding process, but we just don’t really touch it. That’s what’s been really exciting about it, forging under-explored territory for political science.”