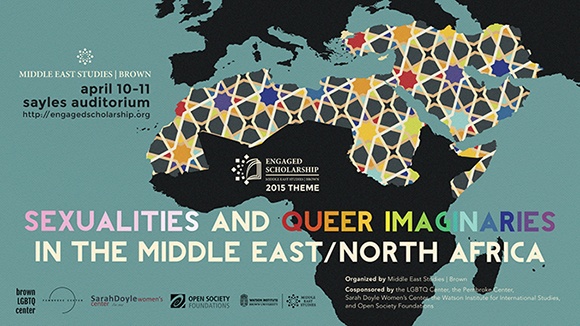 "For our students who are struggling with their own identity development, a lot of them will recognize in these speakers and in the issues being discussed deeply personal matters that will resonate with them."

Exploring Queer Identity in the Middle East and Maghreb

On April 10 and 11, Middle East Studies will host its third annual Engaged Scholarship conference, and this year’s theme is “Sexualities and Queer Imaginaries in the Middle East/North Africa.” Explore sat down with this year’s organizer, Sa’ed Atshan, to find out what it’s all about.

Watson Institute: What is the genesis of this conference?

Atshan: Two years ago, in my last year of graduate school at Harvard, I was invited to speak at the Engaged Scholarship conference put on by Middle East Studies. I fell in love with Brown, I fell in love with Middle East Studies, and I finally found a term for what I’m passionate about and why I’ve come to the academy: “engaged scholarship.” Here it was being institutionalized, with a whole conference being built around it. That was a great experience.

Then, in 2014, after I became a postdoctoral fellow at Watson, the conference was on contemporary archaeological and anthropological field practices in contexts of war, and I was invited to attend. I’m an anthropologist who comes from a conflict zone, who works in a conflict zone, so the ethics of scholarly production in the context of conflict, and the militarization of knowledge – those were really important issues.

Engaged Scholarship embodies what I try to do in so many ways. So last year, I approached [Middle East Studies Director] Beshara Doumani and said, “I want to have a conference on LGBT [Lesbian, Gay, Bisexual, Transgender] movements in the Middle East.” And Beshara said, “Great. You have our full support.”

WI: What are you hoping to accomplish with this conference?

Atshan: I want it to exemplify engaged scholarship. This conference is for people who are passionate about supporting LGBT movements in the Middle East/North Africa region – not just academics, but practitioners. I want there to be really robust conversations between them. It’s not that they’re mutually exclusive; some are able to bridge those worlds. But if we really want to embody the spirit of engaged scholarship, we have to be able to have conversations across these disciplinary boundaries, and with people who are working in the world outside the academy. That’s why we’ve invited artists, novelists, human rights activists, journalists, filmmakers, and religious leaders. It’s a really diverse group of people who share a commitment to supporting LGBT rights in the region. But they come at it from different angles. I hope the scholarship that the academics produce can inform the practitioners’ work, but also that the work that people are doing on the ground – through artistic expression, for example – can inform our scholarship as well.

WI: Speaking of diversity, this is a vast region. The characteristics of movements in Jordan must be different from those in, say, Morocco. Will they find a commonality, or is it the diversity itself that will spur conversation and reveal things?

Atshan: Yes, this is explicit in the title, through the plural “sexualities” and “imaginaries.” This recognizes the fact that how people define themselves as queer subjects, the kinds of movements they’re building in their respective societies, and which of their priorities are most salient or pressing, and how they feel their queer identity intersects with their other identities – that this is all varied and vast and heterogeneous. I hope that a key takeaway will be that there isn’t one model for how people need to self identify or how this work needs to be done. There needs to space for creativity and for imagining what the future landscape of this region is going to look like vis-à-vis queer liberation. I don’t have a particular vision I want to impose. In each of the panels we’re going to find different points of view, and that’s what’s going to make it so rich.

WI: Why is this conference happening here?

Atshan: One of the strengths of Middle East Studies is that it’s bringing the Middle East to Brown in a real and tangible way. The programming has been incredibly compelling. I’ve tried to play my own role in that, through the film festival I’ve curated for the past two years, for example. It’s important that we bring the culture, society, politics, history, and the diverse religious landscapes of the Middle East to Brown. And this conference facilitates that.

A grant I secured through the Open Society Foundations’ Arab Regional Office (OSF) is helping to fund a large portion of the conference. The OSF promotes democracy and pluralism in the region, and the fact that they saw this as cause to support, where we bring LGBT activists and practitioners together in a space as intellectually vibrant as Brown – I’m especially honored by that.

Other sponsors include Brown’s Watson Institute, Pembroke Center for Teaching and Research on Women, Sarah Doyle Women’s Center, and also the Brown LGBT Center. That to me is critical, because it will encourage students to attend. This means our LGBT students, and students who are allies of LGBT community members, will be able to understand the objective LGBT experience outside of the white Western model. There are queer people all over the world, and so often the images, struggles, and discourse that we see come from a very Western centric and, frankly, very white vantage point. It’s really important that we complicate the picture and say, “Look, Middle Easterners and Africans and South Asians are queer as well.” For our students who are struggling with their own identity development, a lot of them will recognize in these speakers and in the issues being discussed deeply personal matters that will resonate with them.

WI: So you’re not just trying to bridge the social and academic realms within the Middle East that are struggling with these issues. You’re trying to open Western minds as well.

Atshan: Part of this conference is about bringing academics and practitioners together. Part of it is bringing people from the Middle East to Brown, so they can benefit from our intellectual community. Part of it is offering our community, especially our students, as interlocutors.

WI: Is there a central tension or struggle that’s common across the region?

Atshan: One of the major challenges we face is how we grapple with the charge that these movements are the product of Western cultural imperialism. That the idea of homosexuality and the socio-politicization of gay identity is a Western phenomenon imposed on the region. It’s disheartening to hear that. These movements are organic to the region. Also, why not break these East-West boundaries down? We live in a globalized world, a transnational world with virtual spaces. People are sharing ideas across boundaries all over the world. So I’m not so comfortable with these reified notions of West and East. Not everything that comes from the West is necessarily coercive. So to say that because I identify as gay makes me a sellout to some kind of Western sexual imperialist project is problematic. One of the things that LGBT movements across the region have to do is grapple with this, and say, “We might have interlocutors n the Western world but that doesn't make us ‘tainted.’’’

Also, these movements are organic to our countries and national contexts. That’s important to keep in mind. It’s not homosexuality but homophobia that’s a Western import to the Middle East. When many Western powers colonized the Middle East – and Africa and South Asia – one of the primary rationales was that we were seen as too sexually permissive, too accepting of homosexuality and homoeroticism, and that we needed to be civilized. So many of these homophobic laws we see in the region and in Africa are, for example, British-imposed laws.

The second challenge is, given that many parts of the region are facing high rates of unemployment, poverty, corrupt regimes, authoritarian and autocratic regimes, the rise of extremist movements, military occupations, conflicts, and Western violent interventions, sometimes talking about gay rights is seen as a luxury. People say it’s is not a priority. But I’m Palestinian, and I’m also an LGBT activist. Our response has to be that all forms of oppression intersect. Take the Palestinian feminist movement. You can’t divorce the national liberation struggle from the women’s struggle for emancipation. They are inextricably linked. Similarly, Palestinian freedom and queer liberation cannot be divorced. LGBT rights is a priority, not a luxury. It’s not a luxury when, for instance, a lesbian woman is forced by her family to get married. That means that for the rest of her life she’s going to be subjected to marital rape. For the woman about to be married off, this is an urgent matter. Homophobia is real. It kills. It kills bodies, it kills spirits. We can’t build democratic, pluralistic, healthy, open societies when vulnerable populations are marginalized in this way. So I reject the notion that it’s a luxury.

WI: When you speak about queer liberation, how optimistic are you for real progress in your lifetime, and what would that look like?

Atshan: First of all, we don’t have the luxury to lose hope. Hope is what sustains life. So I’m always hopeful. Not just from a naïve vantage point, but because over the past decade we’ve seen the rise across the region – despite very challenging contexts – of LGBT-affiliated individuals and activists coming together. There have been victories. One of the victories is that Helem – which means dream in Arabic, it’s the oldest LGBT organization in the Arab world, based in Beirut – recently they got the Lebanese psychiatric association to strike down the notion that homosexuality is a mental illness. That’s a big deal for the region. People respect the Lebanese medical establishment.

Then you have people like my aunt, Laila Atshan, a famous psychologist back home in Palestine. She herself is straight but she’s a huge LGBT ally. She was at a conference in Sudan for mental health practitioners from across the Arab world. One of the keynote speakers, a psychiatrist, was talking about how to convert patients from homosexuality to heterosexuality – how to “fix” them. My aunt stood up and said, in front of hundreds of people, “I have a question. I am a blind woman. I’ve been completely blind since birth. Who among you can make me see?” She paused, and repeated the question. Then she said, “Whoever can make me see can make a homosexual a heterosexual. As mental health practitioners we must embrace human rights and the diversity of humankind. It is our responsibility to help patients celebrate and accept who they are.” She received applause. People came up to her after and thanked her. She told me that gave her hope, to see that so many people know this discourse is problematic. I think with access to the Internet and to queer-friendly images as they circulate around the world, this rising generation in the Middle East is going to be much more open to a nuanced discussion about sexuality.