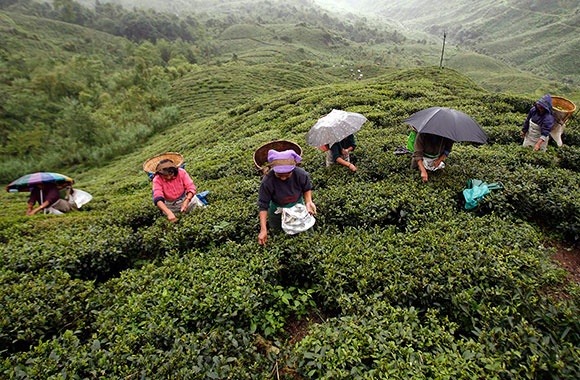 "In anthropology we look at things in the world. Then we pull those things apart like an onion. Then we contextualize the peels."

An Anthropologist Takes on Tea

That’s how anthropologist Sarah Besky explains her concrete – some might say earthy – approach to studying abstractions. To explore market-based development, look at biodegradable “toilets.” To appreciate subnationalism, look at landslides. And to understand market reform in India, look at tea.

Besky’s first book, The Darjeeling Distinction: Labor and Justice on Fair-Trade Tea Plantations in India, does just that. In the early 2000s, the Connecticut native spent three years in Darjeeling, a district of West Bengal known for its British colonial past and for the distinctive black tea produced there, picking leaves alongside plantation workers. She wanted to understand how fair-trade certification shaped notions of value, labor, and justice.

“Justice doesn’t mean on its own,” Besky says. “I looked at its different meanings on plantations – fair trade being one model for justice, WTO Geographical Indication being another – and how these formulations have rubbed up against each other.” Her ethnography also examines the Gorkhaland movement – the demand by Indian Nepalis to establish a separate state – as yet another model for justice. Hailed as “an original and crucial contribution to the growing literature on ethical trade,” the book won the 2014 Society for Economic Anthropology Book Prize.

Besky brings this “analytical distance from the world” – a certain reluctance to accept things at face value coupled with an insistence on lived experience – to the classroom. In her current course, “Anthropology and Global Social Problems,” she delights in her students’ desire to “save the world,” while at the same time encouraging them to question ideas about that world.

“In anthropology we look at things in the world. Then we pull those things apart like an onion. Then we contextualize the peels,” Besky tells her students. “In this class we ask questions about meaning, especially about things that are supposed to be ‘good,’” such as various development interventions. In a recent class, students were extolling the world-saving potential of Peepoo, a personal, self-sanitizing, biodegradable bag for human waste, and Besky was compelled to temper their enthusiasm. “‘Wait,’ I told them, ‘we don’t know anything about how people actually use this! We don’t know what it means.’ We’re debating in these really productive ways, as they really want to talk about potentiality and I want to ask questions about actuality.”

Besky’s current project explores the financialization of tea – that is, its reduction to a tradable asset – following the Tea Board of India’s 2009 mandate that tea auctions be replaced by online brokerage, which made possible the creation of a futures market.

“[Unlike] coffee, petroleum, and pork bellies – all of these commodities that are speculated on – tea is still auctioned in live auctions,” she explains. “It has resisted all kinds of forms of speculation – the ability to buy and sell it before it is produced.

“How do you make tea fit this financial model that makes it look like coffee, and what are the material obstacles? What are the ideological obstacles? How do intangibles such as sensation and value and taste work to resist this kind of neoliberalization?”

The Nature of Labor

These questions will have to wait. Besky and two colleagues recently received a prestigious School for Advanced Research grant for a collaborative project studying the environment and labor. Titled “How Nature Works,” the grant will culminate in an edited volume and a seminar in Santa Fe in September 2016.

Which brings her back to Gorkhaland.

“Darjeeling is fascinating because it’s a colonial hill station, a town on top of a mountain that the British built for their recuperation and leisure. But it’s literally sliding down the mountain. Imagine, you put a city at the top of the mountain and don’t really think about longevity or the monsoon context. And today, the very people the British recruited to clearcut forests to make way for this hill station are trying to make claims to this place, and at the same time trying to mitigate land degradation. My how-nature-works questions are, How do landslides work? How does land itself – along with classic concerns like language and ethnicity – shape subnational politics?”