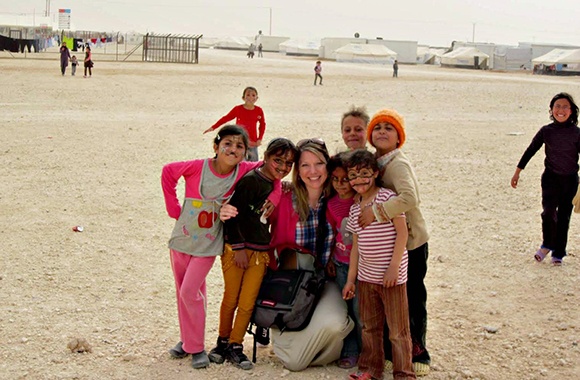 “I am so appreciative of the intellectual and scholarly space that Brown is giving me. People were hungry for the kinds of contributions that I can make.”

Birth of an Anthropologist

A little more than 15 years ago, Sarah Tobin, a freshly minted English major from the farmlands near Fargo, North Dakota, was looking for a job. At the local library she saw a poster for the Peace Corps. She applied, indicating that she was willing to go anywhere. The Peace Corps took her at her word and sent her to Uzbekistan.

“I didn’t even know where it was!” Tobin recalls. “A lot of people didn’t. Before 9/11, Central Asia and the Middle East weren’t really on people’s global maps of ‘important places.’”

During a two-year stint she describes as “difficult and challenging and wonderful and important,” Tobin taught English in the village of Sovhoz #22 (or "State Farm #22"), which grew cotton and grapes for a local winery. She made the same wages as her Uzbek colleagues: fifty cents a day.

It was in Sovhoz #22 that her twin interests, economy and culture, were born.

One payday, Tobin was fascinated to see five of the teachers giving a portion of their salary to the sixth. The practice, a form of peer-to-peer banking, was essentially a self-organized microfinance project that enabled them to plan for things like weddings and birthday and holidays.

“In a situation where the banks are totally unreliable, where inflation is high, it makes much more sense to keep the money circulating in the community than to stick it under the mattress,” Tobin explains.

Once every few months the volunteers would travel to the capital city, Tashkent, for mail. “I would bring home a stack of Newsweek magazines – every Peace Corps volunteer had a subscription,” says Tobin. “I read every word. There was one issue in which they were talking about the different ways Easter is celebrated around the world, and they cited anthropologist after anthropologist. And it was like this light bulb went off. I had never taken an anthropology course, I didn’t know what anthropology was. But as I read this article I realized I wanted to be somebody who knew those kinds of things.”

Back home, Tobin enrolled in a master’s program and got a job with an NGO in Egypt, where she was to do her fieldwork. Her plane ticket to Cairo was dated September 12, 2001. “I packed on the 10th. I unpacked on the 11th,” she says. "But the next issue of Newsweek had a cover that said, ‘Why do they hate us?’ with all these pictures of Central Asians, and I said, ‘I know the answer to that question!’ I knew who Osama bin Laden was years before a typical American. It was a real issue that people would talk about in the village. Suddenly these questions of economy and Central Asia and anthropology took on an importance they hadn’t had before.”

Tobin went on to earn a master’s in applied anthropology, followed by a PhD that focused on Islamic banking and finance in Jordan, where she spent two years and which she considers a second home. Then world events hit home again.

“As I was writing my dissertation, the Arab Spring picked up. Suddenly … the countries in the area I knew started to change – quite dramatically.” One of Tobin’s keenest areas of interest, fueled by her strong social-justice ethic, is the Syrian refugee crisis and the changes the disaster is bringing to Jordan. She recently spent two months studying security and resilience, as well as early marriage practices, among the 100,000 refugees in Zaatari, the second-largest refugee camp in the world, located just over the border from Syria. (Dadaab, located in eastern Kenya near the Somali border, is the largest.)

The crisis, she says, “is not going to go away anytime soon. It’s drawing millions of dollars from the international community, and it still isn’t enough. The Arabic word for food is ‘life.’ So the World Food Program is supplying people with life, and it doesn’t have enough money to operate. Introducing people to the depth of that disaster is important… I think I owe it to the region, to the people who have given me so much, to give something back.”

To develop a course on the Syrian refugee crisis, Tobin will return to Zaatari in late May, thanks to a Global Experiential Learning and Teaching, or GELT, grant from Brown. GELTs provide support for courses that incorporate an international travel component.

Tobin is also excited to return to her [banking and finance] research. “When I was in Jordan doing my dissertation research there were three Islamic banks. Now there are five or six. The field is growing. There are a lot more interesting questions now than there were before, from employment practices to bank policy and monetary policy, to how the typical Jordanian views his own monetary practice. [This] is playing a larger role in the everyday life of Jordanians. Five or 10 years ago people weren’t necessarily thinking about whether their credit card was Islamic. But now they are.”

Tobin’s book, Everyday Piety: Islam and the Economy in Amman, Jordan, will be published by Cornell University Press in late 2015. In it she argues that “at the same time that people are trying to Islamize their economic practice, there is also a part of them that is economizing their Islamic practice. They are calculating rewards, counting prayers, and maximizing their gain.”

Tobin, who exudes a dynamic, generous intelligence, became associate director of Middle East Studies on December 2 and already seems an uncannily good fit for Brown – as a scholar with an active research agenda (she is also an investigator on the largest survey of veiling practices among Muslim women in America), as a teacher, and as a mentor. Her course, “Islamic Economics,” is fully enrolled, and students are lining up to work with her on UTRAs and honor theses.

Radiating enthusiasm, Tobin says, “I am so appreciative of the intellectual and scholarly space that Brown is giving me. People were hungry for the kinds of contributions that I can make.”

“We’re growing really fast,” says Middle East Studies director Beshara Doumani. “It’s not an easy job. We wanted a true scholar who knows the region intimately and knows the language and the issues. Sarah brings the exact skill set, personality, and drive we need to move to the next level.”