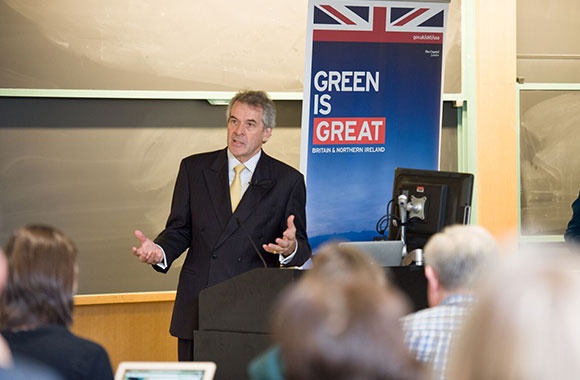 Standing before a large banner declaring “Green Is Great,” Sir Peter Westmacott, British Ambassador to the United States, spoke recently at a lecture cosponsored by the Institute at Brown for Environment and Society (IBES) and the Watson Institute on “How Climate Challenges Are Impacting Security Worldwide.” Westmacott was named to his current post in 2012, having served as the British Ambassador to France from 2007 to 2011, and to Turkey beginning in 2002. His 40-year diplomatic career has also included postings in Tehran and Brussels.

“Climate change is obviously here and affecting people’s lives all over the world in a very real and a very dangerous way,” he said. Venice used to flood 10 times a year; now it’s 100 times a year, he said. Jakarta has sunk four meters in three decades. Due to desertification, the Sahara is expanding south at a rate of 30 miles per year. “All of these changes have an important impact on national security—in a lot of different ways,” he said.

Take the US naval station in Norfolk, Virginia, where climate change is wreaking havoc. With rising sea levels, at high tide on rainy days, roads are submerged, leaving military vehicles “up to their axles in sea water.” “Combined with the extreme weather that you often get on the East Coast,” he said, “this could mean a devastating loss of resources and capability.” Indeed,

Westmacott reminded us, President Obama stressed the link between climate change and national security in his last State of the Union speech.

“At its heart, of course, this is an international issue which is going to require international solutions,” Westmacott said. He called extreme climate events “freak phenomena” that are difficult for less prosperous countries to handle. He pointed out that the UN High Commission for Refugees “has gone on record saying the consequences of climate change are enormous.” Secretary of State John Kerry, he said, called climate change “perhaps the world’s most fearsome weapon of mass destruction.” Scarce resources such as drinking water will only become more scarce, crops and livestock may not be able to survive in certain locations if the weather changes dramatically, and food security will become more challenging. “Stir in a degree of political instability, bad governance, violent rebellion, rivers which have dried up, large expanses like the Aral Sea in Russia, which were once but are no longer vast lakes providing sustenance to millions, and you’ve got any number of perfect storms.”

In the Middle East, where Westmacott spent part of his career, “water resources are often seen as a most likely source of conflict, even beyond ethnic and sectarian and religious divisions,” he said. A number of states may be dependent on water from the same river. “When it hasn’t rained for a long time and there’s not much water in the river, who does it go to?” This is one example, he said, of how climate change can exacerbate existing problems.

“Stir in a degree of political instability, bad governance, violent rebellion, rivers which have dried up, large expanses like the Aral Sea in Russia, which were once but are no longer vast lakes providing sustenance to millions, and you’ve got any number of perfect storms.”

Britain has been warning of the effects of climate change for nearly 40 years. In 1988, then-Prime Minister Margaret Thatcher said, “The danger of global warming is an as-yet-unseen but real enough problem for us to make changes and sacrifices so that we do not live at the expense of future generations.” Coming from Thatcher, said Westmacott, that was “quite a far-sighted comment.”

Britain is determined to be “the greenest of governments,” he said, “with a very strong commitment to tackling both the short and long-term effects of climate change.” In 2008, Parliament passed the world’s first legally binding carbon-emission targets—to decrease 34 percent from 1990 levels by 2020, 80 percent by 2050. The country spends 11 billion dollars each year in renewable energy with the expectation that by 2020 some 30 percent of Britain’s power will come from renewable resources. Three-quarters of a million homes have solar panels, the UK is a leader in offshore wind generation, and there’s a focus on developing wind, wave, and tidal technologies. “Overall,” Westmacott said, “the green economy now supports a million jobs and is worth 20 billion dollars annually.” Additionally, the UK is backing responsible shale gas development and investing in nuclear energy.

Brown is a particularly appropriate place to be discussing climate change, Westmacott said, because of the important contributions of the University’s geologists, and because Brown alumni are leaders on climate and sustainability at federal institutions and corporations. He also praised the university for its own initiatives to reduce greenhouse gas emissions by 2050.

The big focus now, he said, is what will happen in Paris at this November’s international climate conference. “At Paris, for the first time, we’re working for an agreement that covers the vast majority of the world’s emissions,” he said, “not just those from the richest, biggest emitters and the world’s most industrialized countries, which has been one of the problems at so many previous international gatherings.” Without such an ambitious agreement, he warns, there could be 150 to 200 million climate change refugees by 2050, and temperatures could rise between 3 and 7 degrees Celsius by the end of this century. He stressed the importance of the world working together. “No one country is immune from the effects of climate change,” he said. “But no one country can solve it.”