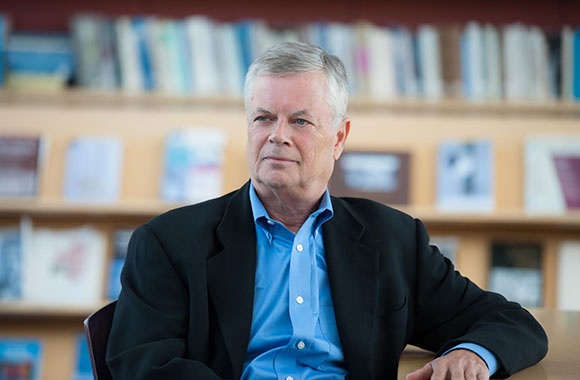 "It’s remarkable to me that Nicaragua, despite its turbulent history, now has by far the lowest rates of violent crime in Central America."

Although Stephen Kinzer has reported from more than 50 countries, he has a special connection to Nicaragua. “It may be just personal because I happened to be there at a time that was very intense,” he said. “I was covering a war, I lived there for six years. Nonetheless, the Nicaraguan people have a certain spirit, they have a soul that I haven’t seen anywhere else.”

Kinzer first went to Nicaragua as a freelance journalist during the Sandinista uprising that ended the Somoza dictatorship. Later, in the 1980s, as Latin American Correspondent for the Boston Globe, then as the New York Times bureau chief in Managua, he covered the contra war against the Sandinistas. “That was really the first time I had been in serious war,” he said. “I had never seen those kinds of things before. Since then I’ve seen enough blood and enough dead bodies and enough crying mothers to last me for several lifetimes.” He wrote a seminal 1991 book, Blood of Brothers: Life and War in Nicaragua, and is considered such an expert on the country that the State Department recently invited him to give a briefing to the incoming U.S. Ambassador to Nicaragua.

“I was covering a war, I lived there for six years. Nonetheless, the Nicaraguan people have a certain spirit, they have a soul that I haven’t seen anywhere else.”

Kinzer thinks we may be entering an age of good relations with Nicaragua. He sees some positive signs. “It’s remarkable to me that Nicaragua, despite its turbulent history, now has by far the lowest rates of violent crime in Central America,” he said. Kinzer attributes this to a sense of solidarity among Nicaraguans and to successful community policing techniques started by the Sandinistas. The drug traffickers that have crippled Honduras and Guatemala have been kept at bay. Tourism has real potential, commodity prices are high for agricultural exports and mining products, and the U.S. is now Nicaragua’s biggest trading partner.

Despite a “tortured” history of U.S. intervention, our current policy is relatively hands-off. The “saddest” of these interventions, said Kinzer, was after the contra war, when Violeta Chamorro was democratically elected in 1990. “Finally,” he said, “we got the regime we always wanted in Nicaragua, but we didn’t support it.” Instead, we imposed “this brutal project they call structural adjustment” to make government more efficient. This forced Chamorro, he said, to get rid of subsidies for things like bread, gasoline, and bus rides, and fire more than 100,000 workers on the government payroll. This was “devastating” for such a poor country. “As a result of all this,” he said, “people in Nicaragua developed a very bad impression of democracy.”

The current president, Daniel Ortega (first elected president in 1984 and reelected in 2007), has created an autocracy, said Kinzer, by forcing a change in the constitution that banned reelection. The next elections are in November 2017, and “his control over the Electoral Council assures that he will be continually reelected,” said Kinzer. Plus, the opposition is weak.

Though Ortega still spouts anti-Imperialist rhetoric in his speeches, he’s also “in bed with big business,” said Kinzer. Wealthy Nicaraguans can now import yachts tax-free. Ortega also supports the plan currently dominating Nicaraguan politics to build an inter-oceanic canal that would compete with the Panama Canal (Kinzer calls it “a fantasy project”). But Ortega also promotes a lot of programs for the poor, which gives him a wide base of support. “So if people in the State Department turn off the radio when the speeches are on, I think they’d find Ortega to be a pretty reasonable partner,” said Kinzer. “I think we potentially are on a path to a better relationship than we’ve had for a long time. And it’s in large part due to Ortega; it’s not just due to us. Maybe we’ve learned some lessons, but Ortega’s showing a certain pragmatism.

To put this in a larger context, Kinzer believes that due to our obsession with the Middle East, “the pressure’s off Latin America, particularly under the Obama administration. We’re not watching them so closely anymore and I think that in a way we’re moving back with Nicaragua to our relationship under the Somoza era. The basis of that relationship was ‘You provide us with security and we will support you politically.’ Actually, that’s what we’re doing now.

“the pressure’s off Latin America, particularly under the Obama administration. We’re not watching them so closely anymore and I think that in a way we’re moving back with Nicaragua to our relationship under the Somoza era."

When Kinzer’s not briefing diplomats, he’s furthering Watson’s mission of public engagement in other ways. A prolific author and speaker, Kinzer writes a biweekly world affairs column for the Boston Globe (“I’m trying to use that column to challenge conventional wisdom and suggest other ways of looking at global issues”) as well as numerous articles and op-ed pieces. He frequently gives public lectures on international affairs. He’s also working on his ninth book, examining the origins of the United States as a global power. Some of this energy is no doubt due to Watson: “This place is a bubbling cauldron of thinking and acting about world affairs,” he said, “and to be in an environment like this is tremendously stimulating.

Currently he’s teaching a course on the History of American Intervention. Up this spring: a new course he’s developing around the presidential election campaign and U.S. foreign policy. Last spring’s extremely popular International Journalism class (which he may repeat in the spring of 2017), involved a weeklong reporting trip to León, Nicaragua, for ten students. As part of his briefing with the incoming U.S. ambassador to Nicaragua, he “proudly” presented their articles to her. “In my opinion, they provide a wonderful window into Nicaraguan reality, because we looked at Nicaragua from so many perspectives…,” he said. “It was a very successful trip and being able to send those stories to the incoming ambassador added a little bit of icing on the journalistic cake.”