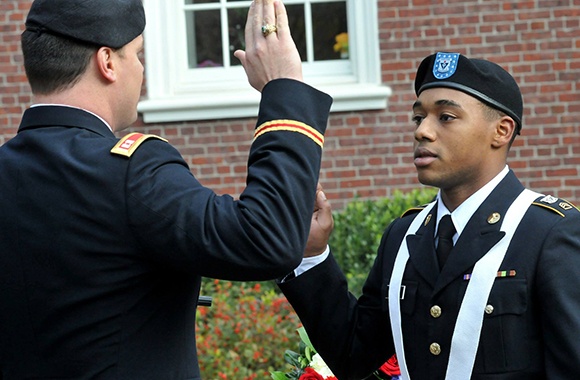 "Although we started through an initiative by student veterans themselves, I feel blessed by the commitment I've received from all levels of the University. This allows me, in turn, to better support our veteran students."

Director of the OSVCP, Karen McNeil

Watson Creates a Space for Student Veterans at Brown

They are sometimes called “the other 1 percent.” That refers to the roughly 1 percent of Americans who serve in the military, and the 99 percent who do not. This shrinking percentage of veterans, the result of a country perpetually at war and of an all-volunteer military, has become a big social problem. It’s now more difficult than ever for veterans and non-veterans to understand and appreciate each other’s experiences and opinions.

This disparity between veteran and non-veteran is even greater on college campuses. Brown has 11 undergraduates who served in the military, or 0.18% of the undergraduate student body. (Meet them here.) This poses a challenge for a school that prizes diversity of thought and background among its students.

And so, in response to the Corporation’s directive in 2012, Brown created the Office of Student Veterans and Commissioning Programs (OSVCP), whose purpose is to “coordinate and direct services that support veterans studying at Brown.” The OSVCP serves as a resource for all US military officer commissioning programs, as well as for student veterans, whether of the US military or military service in other countries.

“Increasing outreach to veteran and active duty prospective students is one of my top priorities,” says Karen McNeil, the OSVCP’s program director. "Although we started through an initiative by student veterans themselves, I feel blessed by the commitment I've received from all levels of the University. This allows me, in turn, to better support our veteran students."

Then, about a year ago, a group of student veterans at Brown met with Richard Locke, director of the Watson Institute, to brainstorm how to better address veterans’ issues and integrate veterans into Brown’s campus, socially and academically. They discussed several initiatives, and landed on the idea of opening up a study space for veterans at Watson.

"Welcoming student veterans to Watson was an easy decision. Here is a group of talented, experienced students who have first-hand experience with some of the core themes of the Institute – security, governance, and development,” says Locke. “Watson is committed to hosting events and discussions on the most important issues of our times. Embracing students with diverse views and experiences is central to our goal of promoting these kinds of conversations on campus."

Matthew Ricci ’15, a political science concentrator, is a student coordinator with the OSVCP, and has been working on veterans’ issues at Brown for several years. Joining forces with the Watson Institute, he says, “was a natural fit,” since veterans have experience in international affairs and offer a unique perspective that faculty and students could benefit from.

While the study space, located on the first floor of the Institute, is designated specifically for veterans, Ricci thinks of it as serving as “community place to coalesce and share ideas, not just among veterans but among other students at Watson.” It will be a place to hold lectures, discussions, and collaborations on projects with professors and fellow students to generate dialogue.

The OSVCP had been exploring ways to integrate veterans on campus and allow them to share their experiences in ways that are productive to veterans and non-veteran students alike, “so we jumped at the chance,” says Ricci. “We feel as though student veterans have a plethora of insights that we'd like to share, and we'd like to hear from and work with traditional students.”

This new study space can help address the disconnect between those who have served in the military and those who have not. Student veterans, Ricci explains, sometimes feel that their experiences are not considered valuable, or are misunderstood, and so they don’t contribute where they may have insight. While Ricci says he’s had nothing but constructive experiences at Brown, he says he hears from fellow veterans who find that misconceptions, on the part of both veterans and non-veterans, stymie understanding and intellectual growth. The military can be a contentious topic, Ricci admits, but he says that veterans are “comfortable about talking about their experiences and want to share them, and this is a space where that can happen.”

One particular misperception that Ricci comes across is the belief that all veterans take part in combat or are raring to fight. Ricci, who did not face combat, served in a submarine in the Navy. During his service, he saw first hand the high level of dedication, focus, and training that went into military work. He witnessed how “people are devoting their lives to something,” he says, and found that in the military, “they want to do their job and do it well.”

This study space initiative also addresses a core tenet of the liberal arts education: that learning is fostered through diverse perspectives and open dialogue. “I don't want to be in an echo chamber,” Ricci says, and “it's incumbent upon us to be informed by all available resources.”

The space at Watson isn’t just for the benefit of student veterans; traditional students now have the chance to learn from their colleagues. “A lot of the students here are going to go forth and do good work in the world during their lives,” says Ricci. He wants to convey veterans’ experiences to his fellow undergraduates, so when they are in leadership position and making decisions, they have all the information they need.

Talking to veterans can be especially productive for those who wish to influence foreign policy and military strategies. Ricci believes that things would be better if “policy makers, researchers, and politicians were to have more exposure to military experience.” Bridging the gap between veteran and non-veteran is the answer, he argues, and it might even decrease the country’s engagement in conflict if they work together to “bring the values of Brown and their insight into making a more enlightened military.”