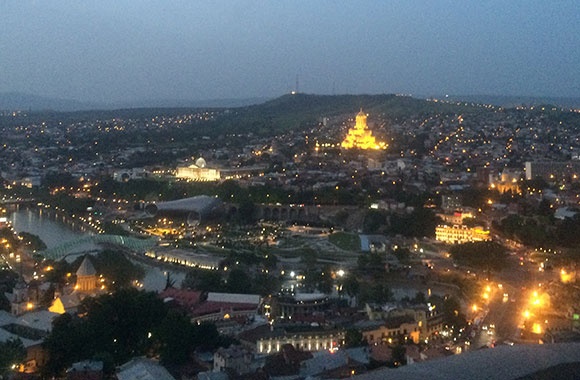 "I think that if we took questions of political economy to economics more generally, both fields will be greatly strengthened. This project presented a great opportunity to begin integrating the two fields, where the models tend to function in isolation from one another."

Have Grant, Will Travel

Thanks to Watson Thesis Travel Grants, five International Relations and Development Studies concentrators will travel this summer to conduct field research for their senior theses. We spoke to one student, James Janison, an IR concentrator, about his plans to spend May through August in Tbilisi, Georgia, researching his project, Modeling Hegemony: Imperialism, Trade, and Growth in Post-Soviet Eurasia.

W: How did you get the idea for your project?

JJ: I knew I was interested in the intersection of open capitalism and international political control. In this world’s stage in systemic cycling, where the basis of spheres of influence seems to stem from economics, I wondered to what extent formerly socialist regimes will keep their control. Does power “care” about markets? Where, in what contexts, how, why?

I took this idea to some political scientists and economists at Brown. I found that trying to factor politics into an economic framework, rather than the other way around as I had originally intended, would allow me to model counterfactual scenarios better and would offer more to the field of international economics and political economy. As such, I’ve inverted my broader question: do international markets care about power in post-socialist, emerging market contexts?

I think that if we took questions of political economy to economics more generally, both fields will be greatly strengthened. This project presented a great opportunity to begin integrating the two fields, where the models tend to function in isolation from one another.

W: How familiar are you with Georgia?

JJ: I have never been there. I speak Russian nearly fluently and have been to Russia for a summer study abroad, but beyond that I have no on-the-ground experience in a post- Soviet country.

That said, I am doing this on-the-ground research as an intern at the Georgian Foundation for Strategic and International Studies (GFSIS), where I have some contacts. I hope that collaboration with the GFSIS will help familiarize me with the political and cultural atmosphere of the region.

W: What do you hope to accomplish? How does your work align with Watson's mission?

JJ: I plan on having two deliverables. The first is a 40-to-50 page research paper providing a tentative answer to the question of how markets in Georgia influence Russian hegemony over the region. The second is an ample supply of primary sources, both quantitative and qualitative data, on Georgian trade and macroeconomic development, trade agreements, and the texts of trade negotiations and other related qualitative documents.

By studying the trade dynamics in this region both as post-Soviet and post-2008 Russian invasion developments, I hope to provide insight into what the best solution is to questions in the trade direction of Georgia and other South Caucasian countries. This has immense implications for security in the region as well, considering the growth of economic spheres of influence as a neo-imperial mechanism for control.