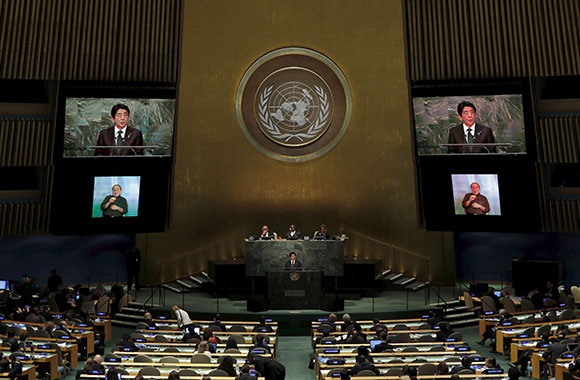 World War II ended with the obliteration of Japanese hegemony in the Western Pacific and its replacement by that of the United States.  We Americans disarmed Japan and imposed a pacifist constitution on it.

This reduced Japan to the status of a weaponless samurai under American overlordship.  Japan accepted this because we undertook to defend it and maintain a peaceful regional environment in which it could rebuild its economy.  For sixty-five years, even as it resisted American efforts to manipulate its self-determined trade and investment policies, Tokyo was careful to assert no political interests independent of Washington's.

With Japan as the hub of our military presence, the United States became essentially the sole supplier of security to the countries of the Western Pacific.  Our undisputed dominance of the region and our nuclear umbrella ensured that Japan’s home islands were secure.  The United States did not need to ask Japan to contribute military power to the regional balance and did not do so.

Our acceptance of responsibility for Japan’s defense, including management of military cooperation with neighboring south Korea, subsidized Japan’s prosperity.  It also enabled Japanese to avoid the painful soul-searching and attitudinal changes needed to reconcile their country with the northeast Asian neighbors their soldiers and colonial officials had earlier abused.  These neighbors saw that, by defending Japan, the United States was keeping it down militarily and out of contention geopolitically.  U.S. military power in the Indo-Pacific was a welcome alternative to that of Japan.  Even China came to see merit in America’s regional hegemony.

After seven decades, all this has changed.

The postwar era has ended in the Indo-Pacific.  China is well along in its return to wealth and power, implicitly challenging America’s seven-decade-long military supremacy in the region.  In practice, the United States has steadily diminishing capacity to overmatch China in its own front yard.

The American position on Japan’s quarrels with China and Korea differs from Japan’s.  Japan can n no longer pursue its interests, as it sees them, with unqualified American support.  This creates a perceived need for it to have its own defense capabilities, separate from those of its American protector.  Japan is gradually building such capabilities.

The only partner able to help Japan balance China or facilitate its military cooperation with Korea is the United States.  But, the American ability singlehandedly to ensure immunity from Chinese coercion is in relative decline.  Notwithstanding the reinvigorated U.S. presence imagined by the so-far largely invisible “rebalance to Asia,” the maintenance of a stable balance in the Indo-Pacific will depend increasingly on politico-military contributions from Japan and other regional powers.  Japan must acquire the ability not just to defend itself but to undertake a region-wide defense role

Japan, like other countries in the region, wants to hedge against China’s possible abuse of its rising power while accommodating that power.  Japan now faces  an awkward choice between continued politico-military subordination to an increasingly erratic United States and submissive deference to a rising China.  In either case, Japan must acquire independent military capabilities that supplement those of the United States and link it to other Asian powers.  Article 9 of the Japanese constitution is not compatible with these requirements.  Nor is the one-sided and unequal relationship embodied in the US-Japan Treaty of Mutual Cooperation and Security.

To sustain stable relations between Japan, the United States, and China and regional balance, the United States must now accept Japan as its partner – not subordinate – in regional diplomacy and security policy.  Japan must cease to be a protectorate of the United States.  It must make its own contributions to the balance of military power in the Indo-Pacific alongside American forces and those of others in the region.  For this to happen, Japan must change in ways that will disturb its neighbors and Americans must think beyond our present obsession with perpetuating a privileged role of dominance in the Western Pacific.  Changed circumstances have rendered Japan's and our  previous roles both obsolete and unsustainable.

As always, the failure to yield gracefully to ineluctable change is the surest way to strategic ruin.