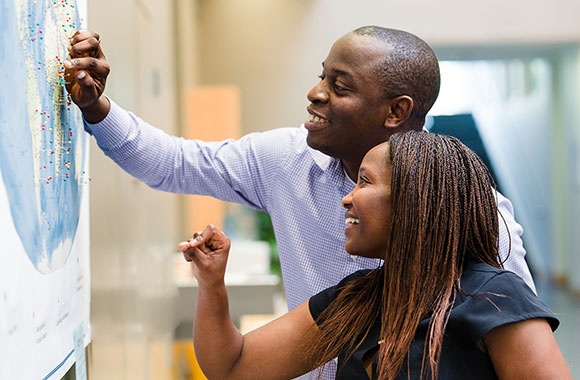 “...we need the best people in as many places as possible learning from each other and actively working together to solve the problems in all their complex, ever-changing, and often politically tricky ways. BIARI is precisely the place where young scholars and others begin this crucial process. Our world demands no less.”

Starting June 6, 155 young scholars from 60 countries will come to Watson for two weeks as part of the Brown International Advanced Research Institutes (BIARI). Now in its seventh year, BIARI provides a framework for rising stars among young faculty from around the world, especially the Global South, to engage in intellectual and policy dialogue with leading scholars in their fields, and with each other as well.

Made possible with ongoing support from Santander Universities and Brown University, BIARI convenes early-career scholars from Africa, Asia, Latin America, the Middle East, and Eastern Europe. Residing at Brown, the scholars attend one of four Institutes, where they explore with experts from Brown and beyond widely differing approaches to research and problem solving on topics of relevance to today’s world.

But this is not your typical conference, according to BIARI’s director, anthropologist Matthew Gutmann.

“There are academic and practitioner conferences all the time where people show up and listen endlessly to expert talking heads. BIARI is the opposite of that,” Gutmann says. “The Institutes are run like high-level workshops in which experts talk, sure – but even more, they interact with participants. And even more than that, participants from dozens of countries around the world begin intensive and energizing collaborations with other young stars in their fields to work jointly on pressing global challenges.”

After BIARI, program alumni – who now number 1000 and hail from 100 countries – can apply for seed grants to continue collaborating on research, pedagogical, or public outreach projects, and for residency awards. Tizta Tilahun Degfie, for example, a newly minted professor of population studies from Jimma University in Ethiopia, attended BIARI in 2013 and returned this spring to work with David Lindstrom on migration theory. Carmen Geha, a BIARI 2012 alum, teaches political studies at the American University of Beirut and returned this month to work with former Watson faculty fellow Melani Cammett on activism during political transitions.

Sometimes BIARI alums come back and stay. Patricia Agupusi, who attended the 2009 Inequality and Development Institute convened by Patrick Heller, Barbara Stallings, and Richard Synder, is now a postdoctoral fellow at Watson.

“The interdisciplinary approach was deep, rigorous, and enriching,” Agupusi recalls. “The program was intense. It gave me a fresh perspective, especially in terms of methodological approach. I met a lot of brilliant people from all over the world. As a result, I’ve worked with BIARI faculty and published two papers with a former alums while working on two more.”

The program’s reputation is growing along with its alumni base. According to Gutmann, “applications for BIARI this year reached a record 1100, making participants this summer the most select yet.  There is great excitement about several wonderful BIARI Institutes from previous years, as well as a new one on Governance and Development in the Age of Globalization.”

“Let's face it,” Gutmann adds. There is no major global problem in the world today that can be solved by people in just one location,” says Gutmann. “If we are going to tackle climate change, economic and social inequalities, health epidemics, or any other issue like this, we need the best people in as many places as possible learning from each other and actively working together to solve the problems in all their complex, ever-changing, and often politically tricky ways. BIARI is precisely the place where young scholars and others begin this crucial process. Our world demands no less.”

Please visit the BIARI website for more information about BIARI 2015.