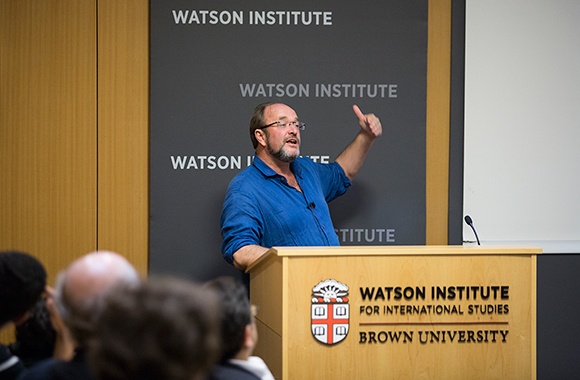 William Dalrymple, the acclaimed Scottish writer, historian, and critic, is the author of numerous articles and nine books, including his “East India Company” trilogy: White Mughals, The Last Mughal, and Return of a King: the Battle for Afghanistan. Before delivering the Brown-India Initiative’s O.P. Jindal Distinguished Lecture (the second of two such lectures this week), Dalrymple shared his thoughts on writing narrative history, and on whether he is a writer or a historian.

Of my last four books, three have been histories. But I also write for a newspaper, and television and radio. At different times I’ve been a journalist, a foreign correspondent, a travel writer. I’m a writer.

I’ve spent 15 of the last 20 years concentrating on narrative history, in quite a narrow area, too: the East India Company and the interaction of Mughals and the British. And the span of time is narrow, too. White Mughals opens in 1798, and The Last Mughal closes in 1857. My next book will go back another 60 years, starting in 1739. The working title is The Anarchy: The Fall of the Mughals and the Rise of the British.

So, I’m plowing quite a narrow trench. As a writer I’ve done all sorts of writing – art history, travel, politics – but as a historian I’m fairly specialized: these four books are really the same story told from four different angles. As a historian, if you want to be taken seriously you need to know your period very intimately. Working as I do somewhere between academia and the general public, I have to be more careful that I get my stuff right. In an ideal world it’s perfectly possible to write a book that satisfies both audiences, but there are many pitfalls walking that tightrope. You can write too generally for an academic audience and you can write too specifically for a general audience. I’ve got ‘round that problem by finding sexy stories that appeal to a general audience but actually spending five years going deep on a very specific story.  If you can really focus on a subject and in a way fortify it in the way that an academic does … and find something that by its subject matter and your style of writing appeals to a general audience, then you can write for both. I was delighted when White Mughals won both the Wolfson Prize, which is Britain’s top history award, but also a prize that was closer to an Oprah Book Club selection. That in a sense is what I’m trying to do – talk to both audiences. It’s a perilous thing and you can easily fail on both fronts.

There are as many ways to write history as there are to write novels. Just as in history you have from slushy romances through to Tolstoy, passing Pynchon on the way, so in history there’s a sliding scale between those who regard it as a social science and those who regard it as a branch of literature. Both interpretations are equally valid. I am closer to the literary end. My hero at college was Sir Stephen Runciman, a Byzantine historian whose masterwork is called The Fall of Constantinople 1453. When I read that, I knew I wanted to do this. But even before that, in an exercise book from my primary school, What do you want to do when you grow up? I wrote “an author and an archeologist.” I suppose I’m not so far.

Watch both of Dalrymple’s talks:

Watch webcast of "Afghanistan: Return of a King, Redux |The lessons of a 19th century catastrophe"