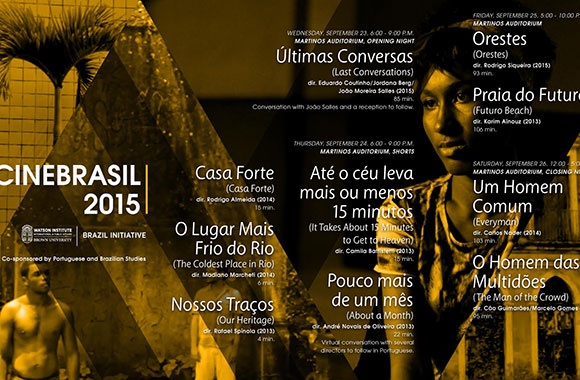 "It's been a pleasure helping to choose this year's films. All of them are from the past two years, so it was a great opportunity to get to see the latest and best in Brazilian cinema."

Brazilian Film: Engaging Audiences to Think about the World in New Ways

From Wednesday, September 23 through Saturday, September 26, the Brazil Initiative will present its second annual film festival, CineBrasil. One of the festival’s organizers, graduate student in Portuguese and Brazilian Studies Flora Thomson-Deveaux, spoke to us about this year’s line-up.

Watson: How did you become involved in the festival?

Thomson-Deveau: I'm a part of the committee that helped put together CineBrasil this year. I've been interested in Brazilian cinema ever since I started studying Portuguese, and so when I came to Brown last year I was happy to pitch in on CineBrasil 2014. It's been a pleasure helping to choose this year's films. All of them are from the past two years, so it was a great opportunity to get to see the latest and best in Brazilian cinema. Some of the films are just going into theaters now in Brazil, and it's the American premiere of some of them.

W: Who should come and see these films? What audiences are you hoping to reach?

T-D: Anyone interested in fiction and nonfiction film, Portuguese, Brazilian history and culture -- we're casting a wide net, in other words. Race relations, violence, kids these days, the meaning of life: you name it, we've got a film about it.

W: Which film are you most excited about this year?

T-D: To be honest, each day of the festival has something I'm really excited about. On opening night we're showing Last Conversations by Eduardo Coutinho -- he passed away tragically last year before editing the material, and so the documentary was finished by his producer, João Salles, and editor, Jordana Berg. After the screening, João is coming to talk about Coutinho, his work, and the process of putting together this posthumous film. The next night features a lineup of short films by young filmmakers, and we'll have a virtual roundtable with all of them via Skype. So in those two nights you have both an icon of Brazilian cinema and some folks just starting out.

On the third night, we have the North American premiere of Orestes, which is a jaw-droppingly inventive look at state violence in Brazil -- it's got psychodrama, Greek tragedy, and a mock trial, and it's a documentary. (Trust me, it works.) And it's double-billed with a beautiful film that was pretty controversial in Brazil when it premiered, Futuro Beach, for its depictions of a gay relationship.

To close things off, we have Everyman and The Man of the Crowd, which are both Brazilian films dialoguing with other works of art. The Man of the Crowd, obviously, takes inspiration from Edgar Allan Poe's short story, but it's a visually inventive, contemporary drama set in the city of Belo Horizonte -- which is a part of Brazil most people outside the country don't think of. Everyman is a documentary that follows truck driver Nilson for decades, even into death, and strikes up a conversation with Carl Dreyer's classic film The Word. So come on out, comparatists! We've got paper topics for you.

W: What is the most surprising thing about the festival this year?

T-D: The most surprising thing about the festival this year may be the documentaries. Last year CineBrasil didn't have any, and this year we've got nonfiction films that all defy the norms of the genre in some way or other. Last Conversations is a documentary trying to deal with the death of its director, all of the short films are dancing on the line between fiction and nonfiction (use of non-actors, biographical elements, etc.), and both Orestes and Everyman are like no documentaries you've ever seen. You don't need to study Brazil to appreciate the things these directors are doing.