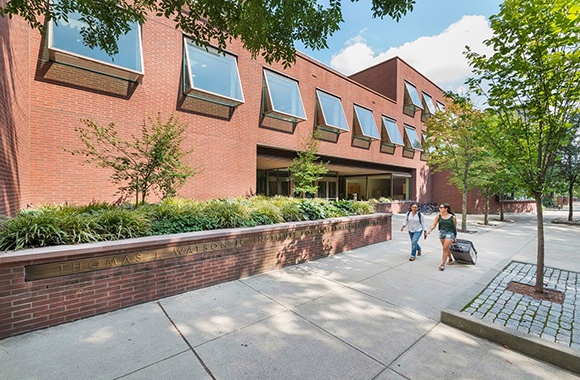 "The goal of the collaboration grants program was to build stronger ties between the Watson Institute and individual faculty across the University, in an effort to fulfill our mission of promoting a just and peaceful world through research, teaching and public engagement."

Richard Locke, director of the Watson Institute for International Studies

The latest round of Watson Collaboration Grants has just been announced, and its reach is broader than ever. The 8 projects selected to receive support involve faculty from 13 different departments and programs at Brown, and from the Department of Illustration at Rhode Island School of Design.

“Since we launched this program in the summer of 2013,” says Richard Locke, director of the Watson Institute, “we have funded 36 projects, engaging faculty from areas as diverse as Anthropology, Africana Studies, Economics, History, Literary Arts, Political Science, and Religious Studies, to name a few, and from Alpert Medical School and the Pembroke Center as well. These projects have enriched the intellectual life of Watson – and, I hope, of Brown.”

Especially encouraged are projects that bridge academic disciplines and aim to influence public policy. Last April, the Center for Latin American and Caribbean Studies and the Climate Development Lab organized the conference “Governing Climate Change: New Ideas and Latin American Leadership as Peru Prepares to Host the 2014 UN Climate Negotiations,” which brought together two former heads of state along with high-ranking officials from Latin America, the US, and the UN.

Luis Alfonso de Alba, Mexico’s former Special Representative for Climate Change, said afterward that the event “[sent] clear messages to key policy makers, such as the importance of having a successful conference in Peru in order to achieve our goals in France” at the 2015 United Nations Climate Change Conference. The conference was the second most-watched event of the 2013-14 academic year.

Another past project was the spring 2014 conference on Human Security and Humanitarian Response, organized by Adam Levine, assistant professor of emergency medicine at Alpert Medical School, clinical adviser for emergency and trauma care for Partners In Health-Rwanda, and a member of the Emergency Response Team for International Medical Corps.

Anthropologist Sherine Hamdy, a Watson faculty fellow, helped organize “Medicine and Political Conflict,” a project whose many components included a two-day symposium, where papers were presented by medical anthropologists, clinicians, and sociologists from Brown and institutions beyond Brown – including George Washington, Duke, and the University of Pennsylvania, as well as a private clinical practice.

“This project enabled us to begin and complete a special issue of journal articles on ‘The Clinic in Crisis,’ which will be published in the journal Culture, Medicine, and Psychiatry in spring 2016,” says Hamdy. “More importantly, the Watson grant helped us develop a network of scholars with whom we hope to continue to collaborate, all working at the intersections of political instability and violence, medical care, and health outcomes.”

"The goal of the collaboration grants program was to build stronger ties between the Watson Institute and individual faculty across the University, in an effort to fulfill our mission of promoting a just and peaceful world through research, teaching and public engagement,” according to Locke. “It was clear when I first arrived at Brown that the only way Watson could fulfill its mission was through partnerships and collaborations with other centers, programs and departments at Brown.

“The collaboration grants have enabled Watson to become less isolated,” he adds, “and we’re learning a great deal from our colleagues across Brown’s campus.”