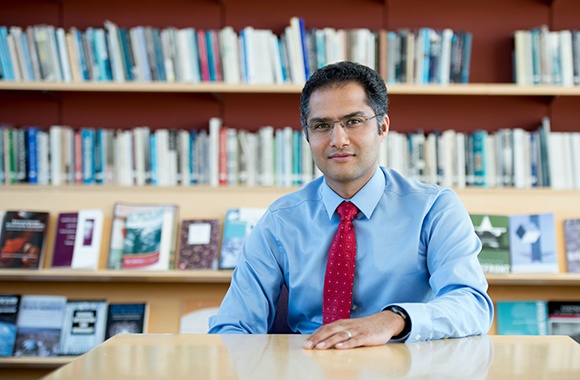 “The inclination is to write a check. It may be provocative, but my advice is to save your money. In three months when the rains pass, travel to Nepal. Walk around. Get to know it. Talk to people. Form connections. And spend lots of money."

Relief, Recovery and Rebuilding in Nepal

Helpless. Anxious. Desperate for reliable information. Desperate to act, to be useful.

These are just a few of the swirling sentiments of the Nepalese diaspora who have found themselves thousands of miles from their home at a time when a massive earthquake has rocked their country, causing untold death and destruction.

What is to be done? Atul Pokharel, a Watson Institute postdoctoral fellow asked himself this question. His answer: to do what he, as an academic focused on development in Nepal and sustained cooperation in general, can do best -- apply his knowledge and skills in a way that will serve the need for data, factual information and ongoing assistance. Anticipating the need for coordinated action amidst the flood of goodwill during the initial relief period, he developed nepalquake.org, a website designed to take advantage of the resources – and aching desire to help -- that his friends and fellow academics were suffering in the wake of the disaster.

The site, established within 9 hours of the earthquake, remains a work in progress, with Pokharel and others contributing data and making refinements as information is refreshed and the situation changes in Nepal. It is intended as a repository for data about the state and status of critical public infrastructure in the affected region, to connect citizens, government agencies, service providers and researchers. It is also a hub of other information, offering a list of verified charitable organizations working in Nepal along with a mechanism to ask questions and seek support.

“The site has provided a way to confront immediately some of the flawed narrative that has emerged by gathering and applying sound information,” said Pokharel. “For example, we heard ‘everything was destroyed,’ yet we learned quickly that while many buildings have been demolished, there are many that remain intact. We heard that ‘government isn’t doing anything,’ and yet we learned that government agencies are doing all they can; it just isn’t enough. We heard that ‘there was more money than the government could spend’, but we learned that it hadn’t reached officials. We also heard that ‘public servants are corrupt and shirking from their duties’ but learned that they were themselves dealing with destroyed homes, lost relatives and collapsed offices without anyone to help them.”

Pokharel, whose family is safe in Nepal, but has lost his childhood home, says the original objectives of the site remain, even though the approach continually changes: augment government capacity by doing things they want to but cannot; help well-wishers think about how to contribute; connect people; and provide data to confront rumors. As the situation moves from immediate relief to recovery, his team is discussing ways to facilitate a more sustained commitment.

“This earthquake has left thousands dead and thousands more without homes. It has destroyed physical infrastructure and has torn apart the fabric of society from which our famous resilience comes,” said Pokharel. “As we mourn what was unthinkable and seek to offer relief, we must look forward to cultivating sustained recovery and reconstruction. There is a far greater role for research universities and researchers in that work.”

Pokharel reports that he is considering how to participate in the reconstruction of his own village, which is located fifty miles from the epicenter. Approximately 5000 homes were destroyed in his district of Tanahun, although nobody lost their lives. “This is where the next crisis is - those marginal areas that are not dramatic enough to draw outside attention, but where people are on the verge of catastrophe because they have lost everything but their lives. In the next three months, they will have to farm without cattle, they will have to plant without labor, and they will have to hope that their irrigation infrastructure is not completely destroyed. If they miss that window, they will need help for another year.”

When asked by colleagues at a recent gathering at the Watson Institute of how they could help, Pokharel replied: “The inclination is to write a check. It may be provocative, but my advice is to save your money. In three months when the rains pass, travel to Nepal. Walk around. Get to know it. Talk to people. Form connections. And spend lots of money. “

To learn more about this effort and to offer support, visit http://www.nepalquake.org.

To participate in the crowdfunding campaign being run by a group of Brown University students and faculty visit: http://igg.me/at/RTpff0Ud9w8

"Nepalese Earthquake Survivors Live In Shelters Like This" - RI NPR