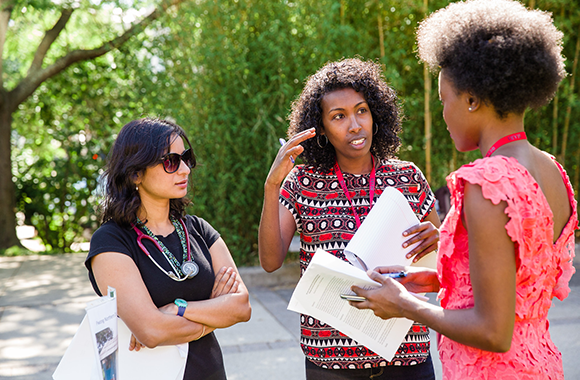 “I learned [during BIARI] that a humanitarian response is knowledge-driven …  and a multi-dimensional process that requires a dynamic mix of people who bring their expertise to bear.”

The situation was dire and growing more perilous. Shortly after a Category 5 hurricane devastated the small island nation, workers from such humanitarian relief organizations as Save the Children, World Vision, and Oxfam arrived to conduct a rapid needs assessment. With significant loss of life, illnesses and injuries, destroyed homes, flooded roads, downed power lines, and ethnic conflict, the needs were urgent and diverse.

“It felt quite realistic; the issues we were dealing with … gave life to the process,” said Chris Kwaja, a lecturer/researcher at the University of Jos in his native Nigeria. “I learned [during BIARI] that a humanitarian response is knowledge-driven …  and a multi-dimensional process that requires a dynamic mix of people who bring their expertise to bear.” BIARI and the simulation changed his perspective on humanitarian responses. “Before, I viewed humanitarian relief efforts from the perspective of security personnel protecting civilians, but now I’ll look at the coordination of both military and non-military responses.”

When you launch a humanitarian response, assessing the needs on the ground is very difficult, said Dr. Adam Levine, a co-convener of this institute and director, Global Emergency Medical Fellowship at The Warren Alpert Medical School. Given multiple information sources and limited time and resources, relief workers must do their best to make astute judgments.

Serving as Médecins Sans Frontières’ team leader to coordinate the simulated needs assessment, Ngilambi Sandy found getting everything done in time stressful. As a civil engineer managing public programs, Sandy, of the Democratic Republic of Congo, anticipates leveraging what she learned during BIARI and the simulation to improve the quality of her work, now in Afghanistan. Employing those newly acquired skills, she will be able to evaluate and critique the results of her team’s completed needs assessments, something she couldn’t do before BIARI. Formerly posted to projects in France, Nigeria, Burkina Faso, and elsewhere, Sandy said, “I can bring examples [from BIARI] back to countries where I work to advocate for better coordination.”

Kanishka Ratnayake, who focusses on peacebuilding and post-crisis development in Sri Lanka, called the simulation intense, with all the hallmarks of a real emergency drill. “[Most] simulations run for days and weeks, but this was a few hours. It was a crash course that didn’t miss anything.”

Grateful that the simulation allowed them to practice what they’d learned in theory, he added, “I’m a practitioner who rarely has time to read. [BIARI] stimulated me to read more and do my own research… to keep updated.” Ratnayake envisions future collaborations with his fellow scholars and BIARI conveners on academic research or program initiatives. “There’s definitely a learning curve; BIARI has given me some solid contacts that I would never have made otherwise, he said. “BIARI is a ‘mini-Ph.D.’”

During his June 14 keynote presentation, Pratap Mehta, president and chief executive of the Centre for Policy Research, India’s most preeminent think tank, analyzed why nations as diverse as India, Turkey, Hungary, Poland, the United States, France, and the Philippines suffer deep, pervasive anxiety and foreboding about the future of their liberal democracies. Speaking to scholars attending all the BIARI 2016 institutes, Mehta said, “It’s truly astonishing how low the expectations of democracy are becoming… it’s almost as if democracy survives, we should be grateful.”

A frequent contributor to several international newspapers and an editorial consultant to The Indian Express, one of India’s most widely circulated English-language daily newspapers, “Mehta is a profound thinker deeply steeped in political theory,” said Patrick Heller, director of the Graduate Program in Development at Watson and a professor of sociology and international and public affairs. The promise of continued growth, prosperity, productivity, and employment – which allow us to anticipate a better future for our children – is no longer a widely held belief, even in nations experiencing fairly spectacular growth rates, such as India, said Mehta. With many nations’ legislative bodies perceived as broken, corrupt, or paralyzed, power has shifted to regulatory institutions such as courts and a growing belief perceives our institutions are inherently plutocratic.

We’re left to ask: “Who does the job of mediating [conflicts and public discourse] in a democracy?” Media is not performing that function, politicians are increasingly unable to determine public opinion prospectively, right-wing leaders have abandoned censorship for disinformation campaigns, other professionals – such as doctors, lawyers, and teachers in India –are even less trustworthy than are politicians, and nationalism is coming back with a vengeance, Mehta said.

With politicians such as Vladimir Putin and Donald Trump, for example, Mehta asked: “Will it be enough to yell at the darkness when you see these evil forces or will you need to find an alternative source of light?”