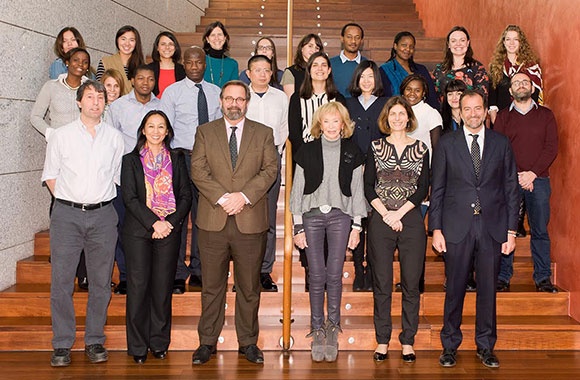 "It was particularly rewarding to watch how interested they were in each other’s work, and what great ideas and suggestions they shared with each other.”

Once Is Not Enough

In the summer of 2009, 149 young scholars from 49 countries gathered at the Watson Institute for two weeks as part of the first Brown International Advanced Research Institutes (BIARI). The program was conceived as a framework for early-career scholars from Africa, Asia, Latin America, the Middle East, and Eastern Europe to address pressing global challenges by exploring – with each other and with experts from Brown and beyond – different approaches to research, policy, and problem solving.

Now in its eighth year, with generous ongoing support from Santander Universities, BIARI regularly receives 1,000 applications annually and boasts more than 1,000 alumni around the world – many of whom continue to pursue intensive and energizing collaborations.

The program’s success is as clear as the urgency of the problems it addresses. No surprise then that its director, Brown anthropologist Matthew Gutmann, would want to expand its reach.

“Learning doesn’t happen only in Providence. So one of the things we’re doing, besides building on excellence, is taking BIARI outside the US,” Gutmann says.

Last month, the first one-week, regionally focused BIARI took place in Spain, thanks to additional direct support from Santander. The topic, Global Health Politics, attracted 22 academics and practitioners from 21 European institutions, 10 countries, and 11 countries of origin. Attendees examined the politics of health care provision in the era of globalization, exploring such questions as What are the bases of health policymaking in different countries and contexts? What roles do international organizations and agencies play in health care funding, provision, and agenda-setting? Where do scientists, and scientific agencies, fit in? María Teresa Fernández de la Vega, the first deputy prime minister under Spanish Prime Minister José Zapatero, gave the keynote address. Nitsan Chorev, the Harmon Family Professor of Sociology and International and Public Affairs and an expert on pharmaceutical production in East Africa, was the convener.

“It was a remarkable experience,” says Chorev. “Imagine a week-long conversation among historians, political scientists, nurses, medical doctors, sociologists and consultants – all in one way or another concerned with the issue of global public health. It was particularly rewarding to watch how interested they were in each other’s work, and what great ideas and suggestions they shared with each other.”

Taking it on the road

Gutmann, who became director of the program a year ago, thinks the new model is key to increasing the BIARI network in the world. “BIARI is highly successful, but it requires people to leave their jobs for two weeks and travel sometimes halfway around the world. People who wouldn’t otherwise be able to attend can attend the one-week, targeted January institutes.”

Gutmann has already planned the next January BIARI, on international migration, to be held in Mexico City and conducted in Spanish and Portuguese. The conveners are David Lindstrom, chair of sociology at Brown, and Silvia Giorguli, president of the Colegio de México and Brown PhD recipient.

Gutmann is eying Brazil and China as future locales, and future BIARI topics include refugees and migrations, cities and environment, and climate change.

“To me, climate change is the ‘poster institute’ for BIARI,” says Gutmann. “The whole point of BIARI is that there are problems in the world that can’t be solved country by country. You’ve got to get together the best people to help solve them. We gather the young faculty, and they begin collaborating and networking for what we hope will be 20, 30 years of meaningful work together.”