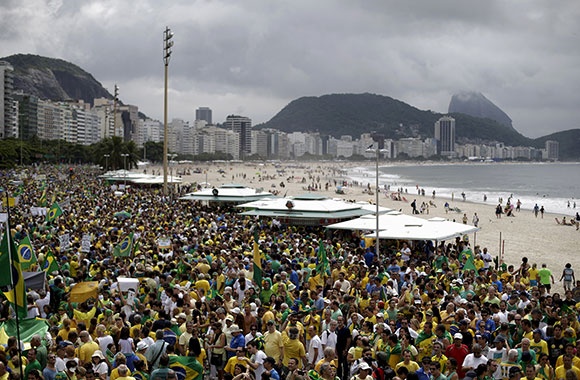 "We’re always seeking a deep study of Brazil … and opening it up and seeing connections to the world and how we can see see it comparatively."

Recognized as one of the nation’s best resources for Brazilian studies, Brown and the Watson Institute host the Brazilian Studies Association and its biannual conference

Follow the conference and join the conversation with #BRASA2016.

Brown’s engagement with “all things Brazilian” is as deep and rich and storied as the country itself, and that engagement is particularly visible at the Watson Institute.  Now, the Institute is the home – through 2020 – of the Secretariat of the Brazilian Studies Association (BRASA), an international association of scholars from the United States, Latin America, and Europe, who support and promote Brazilian studies in all fields, but most notably the humanities and social sciences.

Hosting BRASA here, says James N. Green, Carlos Manuel de Céspedes Professor of Latin American history and director of the Brazil Initiative at the Watson Institute, reinforces and strengthens the Institute’s role as a vibrant and dynamic repository of contemporary research and learning. Of the four BRIC (Brazil, Russia, India and China) nations, Brazil is not only our nearest neighbor; it is a rising world power, with a huge population, the largest Afro-descendant population outside of Africa, and an extremely rich and diverse economy.

The Brazil Initiative brings dynamic and diverse resources together to create synergy and offers an unparalleled breadth and depth of knowledge about Brazil; Brown’s language program is outstanding. Together, these “make us one of the best” among peer institutions studying Brazil, says Green, who lauded Provost Richard Locke and Mark Schlissel, a former provost, for their support of this initiative.

While many colleges and universities embed their Portuguese language and literature classes in other language departments, Brown hosts a department of Portuguese and Brazilian studies, says Green. But Brown’s position as a preeminent institution for Brazilian studies extends beyond language acquisition. A $3 million grant recently funded scientific collaborations between scholars at Brown and in Brazil; a subsequent grant will build new partnerships focusing on environmental studies. Yet another grant, made in honor of Green, provides up to 10 $2,000 grants to defray graduate students’ expenses associated with studying this summer in Brazil. Watson’s Choices for the 21st Century Education Program even offers high school teachers across the US a curriculum tailored to Brazil.

During BRASA’s tenure here, 1,000 scholars will learn more about the Watson Institute, already recognized as a premier site of Brazil scholarship. Many BRASA members provide guidance to government officials about Brazil’s history, social and economic policies and practices, politics, and economic structures.

“Expanding our knowledge of the world in governance, security, development and the economy in a just world … all of those issues are wholly related to the reality of Brazil,” Green says. Watson hosts lectures, events and conferences that bring scholars interested in these questions. “We’re always seeking a deep study of Brazil … and opening it up and seeing connections to the world and how we can see see it comparatively,” says Green. “I think the University understands that we’re already a center of excellence and the reference point for studying Brazil.”

Brown’s campus will be the site of lively debates and discussions about Brazil – in English and in Portuguese – between March 31 and April 2, with the arrival of about 600 scholars for BRASA’s biannual conference, BRASA XIII. During this content-rich conference, attendees will have the opportunity to influence the future course of Brazilian studies in universities and colleges in the United States. The conference’s town hall meeting, says Green, will empower attendees to collectively evaluate and advise on such questions as, “What are the best ways to advance the study of Brazil in the United States? How can [BRASA] help facilitate that or be a network for that?”

These issues aren’t unprecedented for Green or Brown University: Shortly after coming to Brown, Green, then BRASA’s immediate past president, organized a conference here on the future of Brazilian studies, in 2005. Now, more than a decade later, “Brazil is going through a bad small time; it will come out of it in two or three years,” says Green. “Brazil will become re-engaged with the world in a more vigorous way, and Brazilian studies will expand. They have expanded in the United States in the last 10 or 20 years, in part because of [BRASA]. We provide a vehicle for people to build community and … share projects.”

The energetic Green envisions developing yet another project for BRASA. Pending approval from BRASA’s executive committee, COBRAS, which means snakes in Portuguese, will become a consortium of universities and colleges with an interest sin Brazilian studies, and will allow those institutions to share knowledge in a collective, collaborative fashion.

The University’s commitment to investing in BRASA helps raise our profile among scholars of Brazil and scholars in Brazil, says Green.