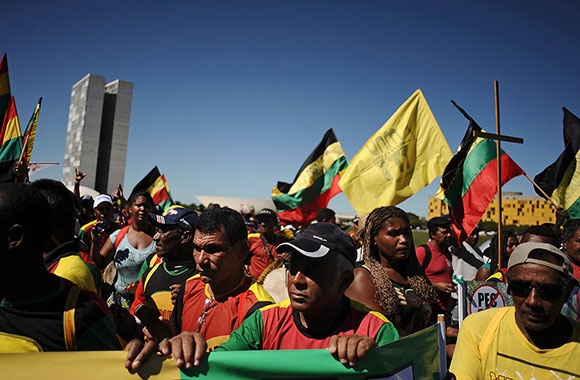 “Brazil is a complex, intriguing and fascinating country. People there are trying to confront legacies of slavery and social inequality in creative ways, and scholars …are doing interesting research on these topics.”

View all of the Brazil Initiative's events here.

Although far from the world’s only nation wrestling with systemic inequality and unjust societal practices and policies, “Brazil is a complex, intriguing and fascinating country,” says James Green, director of the Watson Institute’s Brazil Initiative and the Carlos Manuel de Céspedes Professor of Latin American History. “People there are trying to confront legacies of slavery and social inequality in creative ways, and scholars …are doing interesting research on these topics.”

To that end, the Department of Africana Studies and the Brazil Initiative continue their collaboration to sponsor a robust array of programming that examines the Afro-Brazilian experience through the larger lens of the Americas, says Keisha-Khan Perry, an associate professor of Africana studies. Upcoming speakers include:

Indeed, it’s only recently, adds Anani Dzidzienyo, an associate professor of Africana studies and of Portuguese and Brazilian studies, that Afro-Brazilian life has become part of “legitimate public discourse. It was not so cool at one time to talk about it. The Black presence [in Brazil] is something that increasingly is not being ignored.”

Despite having the largest concentration of African descendants outside of Africa, Brazil traditionally has not been widely studied by academicians in the United States, who focus on the Black diaspora’s impact in the United States and, secondarily, in the Caribbean. That’s not the case at Brown, however, where three Africana Studies faculty (Watson Faculty Fellow and Gerard Visiting Associate Professor of International and Public Affairs and Africana Studies Geri Augusto, Dzidzienyo and Perry) focus their research on Afro-Brazilian studies, and hosts one of the nation’s preeminent Brazilian and Portuguese studies programs. Perry commends the Watson Institute’s commitment to thinking globally about the Afro-Brazilian experience, and to partnering with Africana Studies faculty on this important topic.

Augusto, too, supports the idea of creating a bridge of engaged scholarship between the Watson Institute and Africana Studies. “In the face of grave setbacks to democracy, many Brazilians are waging a struggle right now to exert what freshly reelected Afro-Brazilian City Councilman and longtime activist Silvio Humberto in Salvador de Bahia calls ‘an active citizenship.’”

A grant from the Watson Institute to the Department of Africana Studies supported the collaboration on an ongoing series on Afro-Brazilians in the Black Diaspora, Perry says. “Afro-Brazilians constitute the majority of [Brazil’s] population; to center their experiences, politics, social movements, perspectives and culture … is being true to what Brazil is.”

While marginalized populations around the world struggle for racial, religious, and gender equality, Brazilians were wrestling with issues of genocide long before American citizens used the hashtag Black Lives Matter, says Perry, who encourages scholars to understand the nations’ similarities, which could lead to a stronger global social justice movement. “What does it mean for Black Lives Matter as a movement if we don’t consider the experience of Afro-Brazilians who are dying by violent militarized police action at far higher rates than African-Americans here?”

Green concurs, acknowledging that, while slavery played out differently in the two countries, underlying commonalities exist, with both Brazil—the last country to outlaw slavery, in 1888—and the United States experiencing racism and opposition movements to such oppression. “Brazil officially [now] draws attention to and underscores the importance [of the Afro-Brazilian experience],” explains Dzidzienyo. “How that translates to changes in society is a work in process.”

“Now, I can’t imagine anything more timely than a Brazilian Initiative that helps us interpret and analyze [what Humberto’s words mean] through more than one lens,” Augusto says.

The Brazil Initiative, says Green, has long committed to having scholars, Brazilian and otherwise, studying Brazil and Latin America present their research here, which raises visibility for and awareness of these historically underrepresented scholars and their research.

“Having the African descendants’ experience centered at the Watson is really important,” says Perry, who is confident that Brown students are eager for a richer, deeper understanding of these issues. “No longer are they satisfied with going through graduate education and not learning about the majority black population.”

Additional programming will be held later in October and November. Visit the Watson Institute for more information.