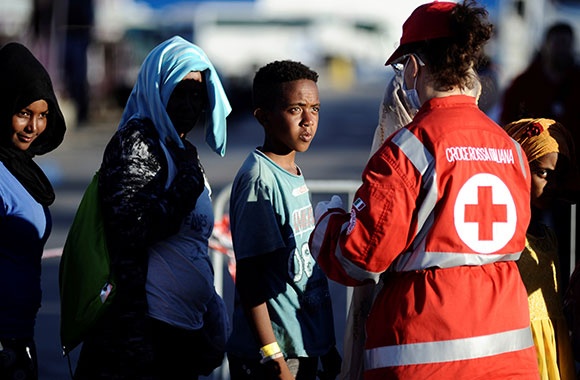 “I’m developing a course called The Evolution of Human Rights, and I felt that if I was going to teach that, I needed to understand the issues with more depth than what we generally get from the media. Now I feel confident I can … give this to my students and do it responsibly.”

In One Intense Week, Teachers Learn From the Experts – And Each Other.

On a hot sticky day last week, Keith Brown stood in a classroom at the Watson Institute and described both the flow of Syrian refugees into Europe and the shifting responses of politicians, citizens, and the media. The 20 people who sat before him were no ordinary students, however: they were social studies teachers from across the country and from as far away as Qatar and Australia. While their colleagues back home were enjoying picnics and pool time, these dedicated few were forming the newest cohort of participants in the Summer Leadership Institute, an annual professional development opportunity developed by The Choices Program.

The Choices Program, which is based at Brown and part of Watson and the School for Professional Studies, creates innovative, relevant curriculum resources for high school teachers on contested international issues, both historic and current. The aim is to equip students with the context and perspective they need to become well-informed, engaged citizens. Teachers accepted into the Summer Leadership Institute come to Brown to attend five days of “classes” taught by academics on a single, topical subject.

The theme this year was Global Refugees: Human Rights, Responsibilities and Responses – a subject that seems to take on greater significance every day. “When we were planning the Institute last fall, we knew that students would be asking their teachers questions about it,” said Maureen Stephens, the program’s professional development director. “We knew it was going to stay in the news, and it has. It’s also impacted domestic discussions in this campaign season.”

One of the greatest strengths of the Choices Program is that it draws on the expertise of scholars from Brown and beyond to create its materials – and the Institute does, too. Secondary school teachers gain exposure to Watson faculty such as Keith Brown, an expert on nationalism and identity, as well as Sarah Tobin, an anthropologist who has spent time in Zaatari, Jordan’s enormous refugee camp just over the border from Syria, and Stephen Kinzer, an award-winning journalist who writes frequently about US foreign policy. Peter Krause, a political scientist from Boston College, “broke down the Syrian civil war and refugee crisis in such a clear, thoughtful, and helpful way [that] I feel more competent in transferring that information to my students,” said Kari Detwiler Beck, who teaches at the American School of Doha in Qatar.

New this year was a session led by practitioners – people “on the ground” who work with refugees every day. Baha Sadar, director of refugee resettlement at the Dorcas International Institute of Rhode Island, led a session on US refugee and immigration policy. Another first was the live broadcast of the final lecture of the week, by Madeleine Campbell '03 AM '05, director of the Center for the Study of Human Rights at Worcester State University.

For Meghann Scharfenberger, who teaches 9th through 12th grades in Louisville, KY, the scholarship is paramount. “I’m developing a course called The Evolution of Human Rights,” she said, “and I felt that if I was going to teach that, I needed to understand the issues with more depth than what we generally get from the media. Now I feel confident I can … give this to my students and do it responsibly.”

Darius von Guttner, who teaches in a regional school in Australia, agreed, adding that he felt enriched by his peers as well. “This is not an easy subject to teach,” he said. “But we’re dealing with the same students. The issues seem to be exactly the same. We’re encountering similar questions. The exchange of approaches is what really is good about this course.”

The Options Role Play activity is central to every Choices curriculum unit, and requires that students analyze and present multiple perspectives on the question at the heart of the unit.

There were also sessions intended to deepen teachers’ understanding of Choices pedagogy, Stephens explained, including how to optimize and even modify the curricular materials in the classroom. The Options Role Play activity is central to every Choices curriculum unit, and requires that students analyze and present multiple perspectives on the question at the heart of the unit.

The activity both challenged and intrigued von Guttner. “I was reluctant, but now I’m really impressed with the role play. It’s giving students choices,” he said. Scharfenberger, who attended the Institute 10 years ago, is a longtime fan. “Options Role Play is a perfect mix of academics and pedagogy: you learn and then you apply. The students love it. It gets them up and thinking and collaborating with each other. It forces them to create an argument and actually justify it,” she said.

The deep understanding and buy-in are important, Stephens explained, because outreach is one of the foundations of the Leadership Institute. Each applicant must submit an action plan outlining how he or she will “spread the word” back home – by leading workshops and writing articles for trade publications, for example. Graduates of the Institute are known as Teaching Fellows, and Stephens follows up with them throughout the year. People who apply to the Institute are really “teacher leaders,” she said. “They want to do the outreach.”

Scharfenberger, who plans to lead workshops at the local and regional level once she returns home, intends to stay in touch with her new cohort, just as she has with her first one. She finds the exchange of ideas and resources invaluable. “As a teacher, you’re looking to expand your group,” she said. “The more teachers you’re in contact with, the better you become as a teacher.”