"All other substantive issues will depend for their relative success on the ability of the new leader to catalyze a sense of cohesiveness within the body politic. Without that, political paralysis is likely to continue and will frustrate efforts for constructive policies."

Build Infrastructure
Donald Trump’s stunning victory is a threat to civil rights and civil liberties, to internationalism and world peace, and to progress on many issues. Obama’s accomplishments on health care, climate change, and financial reform are all at risk. If Trump uses the power of his office to bully opponents, trample Constitutional norms, and scapegoat groups, he should be resisted.

Trump’s top domestic priority should be to promote widely shared economic prosperity. While there is no magic bullet to generate broad-based, inclusive growth, it is hopeful that he recognizes (as did Clinton) that the United States would benefit from a boost in infrastructure investment. There is no shortage of attractive investment targets. Many roads, bridges, water systems, and airports are crumbling from deferred maintenance. Investments in public infrastructure can increase future productivity and generate jobs that often offer middle class wages to blue collar workers.

Infrastructure will present an early signal of how Trump will govern and whether he will use his presidency for constructive purposes rather than destructive ones.

Unity, or at Least Cooperation
I think in the wake of such a rancorous and divisive campaign, and such a close election, the new U.S. president’s main task must be to try to bring the country together. The tone of the campaign has been so hostile and negative on both sides that bridging the ideological gap in the country may prove more difficult than in the past. Effective democratic politics requires compromise, but hatred makes negotiation more difficult. Moving hatred and fear toward compromise and cooperation is not a trivial task, and may indeed be impossible, but the effort remains essential nonetheless. Striving for some sense of unity is not just important for achieving better prospects for effective governance. It also constitutes a strategy of enlightened self-interest because a divided population will make all political debates more contentious. All other substantive issues will depend for their relative success on the ability of the new leader to catalyze a sense of cohesiveness within the body politic. Without that, political paralysis is likely to continue and will frustrate efforts for constructive policies.

The challenge, of course, as always, is that victors are rarely willing to give concessions to losers, even when they win by the narrowest of margins. And those who are left excluded and alienated from the political process may work to obstruct the changes the victor may wish to institute.

Anything Goes
As we have now learned, it is quite hard to predict U.S. presidential politics these days. Suggesting the immediate agenda of the president-elect seems a rather futile task, as nothing is likely to be as one might imagine. Whether he can reassure the world that he will not take the United States to the brink of a world war is anyone’s guess. Whether he can now contain the hatred and racism that he has unleashed is equally questionable. Whether he can fulfill any of the economic promises that he has peddled seems as likely as the ability to make a million dollars after going to his university. The politics of resentment and anger won the elections. It will only strengthen similar tendencies worldwide.

It’s About Mexico
Our new president has said he wants to reduce tension between the United States and Russia, which is good.  With luck, he will also come to understand that just as Russia poses no threat to us, neither do Iran, Syria, Afghanistan or other countries where we are involved in nation-building or nation-destroying.  There is one country, however, that is hugely important to the United States and that Donald Trump has deeply alienated: Mexico. Repairing this tie should be his first foreign policy priority.

With the possible exception of China, Mexico is the most important country in the world to us.  Our fates are inextricably tied. We rise or fall together. A thriving Mexico immeasurably strengthens the national security of the United States. A failing Mexico, or one that degenerates into instability, or one that chooses a leader who wants to confront the United States, threatens our security. In fact, that is just about the only true security threat on our geopolitical horizon.  It is still distant, because in many ways Mexico is thriving and highly promising. Yet Trump’s campaign rhetoric has outraged many Mexicans. He should move quickly to heal this wound.

It’s Our First 100 Days
Yesterday's election was testament to the fact that our country is more deeply divided than many of us thought possible. These divides call into question our fundamental commitment to democracy, as witnessed by the Senate block on the confirmation of Judge Garland to the Supreme Court. Our country's divides also question our ideals of opportunity, as witnessed by popular support of Mr. Trump's plans to expunge many of our country's immigrants and to dismantle the Affordable Care Act. The huge amount of uncertainty that this election raises is already carrying severe consequences for the global economy, with implications for the well being of Americans and that of people around the globe.

What matters most right now is not what Mr. Trump does in his first 100 days, but what we as Americans do in our next 100. What matters is what beliefs and commitments we take a stand for at this moment -- and insist that our elected officials uphold as well. This must involve upholding the democratic process with regard to the Supreme Court, the Affordable Care Act, our treatment of all people contributing to our country's economy, our commitment to gender equality, and the way we treat our environment. We must insist on concrete plans for moving forward the kind of democracy we believe in, rather than being paralyzed by threats about what will be torn down. We must also keep focus on what's happening directly around us -- in our communities and our states -- and recognize that we have agency at these levels, too, and the time to take action is now.

I have already written about the danger of Trump as candidate. With his consolidated power, American checks and balances can’t be found in its branches of government. They must be found in the morality of those charged to execute policies (think Hannah Arendt), and in the capacities of civil society to resist injustice. Both must begin with naming the problem.

Last year, I branded both Brexit and Trump as Übermensch Escapism, forms of problem solving based on adoration of Putin-like strong man leadership. But it’s even clearer now on what that strength depends: white supremacy laced with misogyny, nativism, heterosexism, and more.

In his proposed policies and actual rhetorics, Trump performed a measure of exclusionary politics that led many to label it fascist. While President Elect Trump has promised to be president of all the people, I don’t know why I should trust him to do that. I would rather civil society figure ways to defend itself, and its most vulnerable members, from what Trump has promised in his campaign and demonstrated in his practice.

We need a movement of solidarity that will defend human rights and social justice against a Trump regime that came to power despite the clear majority of people of color, and their allies, voting against him.

What is President-Elect Trump’s mission in his first 100 days, or even now?

Dismantle White Supremacy. If that’s beyond Presidential power, start by naming the problem.

The first 100 days are not going to be about what they should be about, regardless of who gets elected today…
Trump versus Clinton. The brash outsider (or the sexist, racist, reality star, if you prefer) versus the experienced policymaker (or criminal, Wall-Street-loving one percenter, if you prefer). Now we know what happened, what happens next? The list of what they should try to do during the first 100 days is endless. Infrastructure, entitlement reform, tax reform, bipartisan bridge building, calm the markets … take your pick. But here’s what neither of them is going to do anything about, and it is pretty much the only thing that matters in the long run.

I originally wrote this at my desk in the Watson Institute on November 8, 2016. The average temperature in Providence, Rhode Island, in November is 51.5 degrees F. The average high temperature is 53 degrees F. Yesterday it was 62 degrees. A week ago it was 71 and 70 degrees F on successive days. Just in case you think this is a blip, a local anomaly, please consider that the arctic as a whole is five degrees above trend. 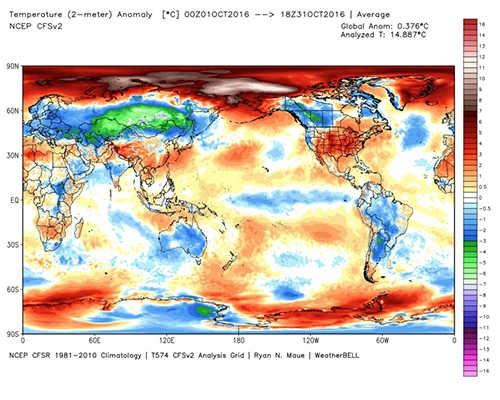 The new leader of the United States thinks that global warming is either a joke or a hoax perpetuated by the Chinese government. His entire party, now dominant in the Senate and the House, refuses to acknowledge this reality and wants to dig more coal and burn more oil. And it’s not that Clinton would have done much better. The ‘nudges’ and incremental gains so beloved by mainstream democrats don’t really count for much on this front.

So let’s talk tax cuts, trade agreements, tort reform, and anything else you like. But just remember: Nature bats last. And Nature is coming to home plate quicker than ever.

Once upon a time in America
"The US presidential election of 2016 will be remembered for its widely unexpected and astonishing outcome, the incendiary nature of its campaign and the perfect storm of anger that it unleashed. Some called it "the election of our discontent". The idea of America was called into question. In the words of British pollster Lord Ashcroft, who tied his country's vote on Brexit as analogous to the emergence of the Trump phenomenon in the US: "Brexit and Trump are the opening chapters in a story whose denouement we have yet to see." 'Trumpism', a growing global phenomenon (witness the rise of the right in many parts of Europe), will not go away even after the election of Donald Trump to the US presidency."

White with rage
"How did Donald Trump, defying all pollsters and projections, manage to win the US presidential elections? And what does it say about American politics today? The first question requires that we reconstruct the voting data and assess how it is distributed over key demographic categories. The second would take us to the larger conclusions.

As is well known, it is possible to win the popular vote in the US, but lose the presidential election. This is because the presidential elections are decided in the electoral college, where states are the building blocks of victory, not the popular vote. Hillary Clinton had to win 270 out of 538 electoral college votes. As of this writing, even though she is about 2,81,000 votes ahead of Trump, a lead eventually expected to rise above a million or more, she has only 228 votes of the electoral college, whereas Trump’s tally is 279. She has already conceded defeat. In 2000, Al Gore also lost in a roughly similar fashion."

Read the Ashutosh Varshney's full response in The India Express