"That non-recognition, that non-connection, that alienation from one another is the basis for the polarization in our society, he said, and the basis for our self-destruction."

Professor of Sociology and of International and Public Affairs, Michael D. Kennedy

Professor Kennedy's Take: Looking for hope in a polarized world

Representative Elijah Cummings of Maryland is very much alive, and very much someone to remember, someone to know. He spoke last night at Brown University, where a sense of possibility, of hope, and of outrage and injustice, permeated. A "special ed" student as a child, with parents enjoying no more than three years of formal education, he has earned all the education one would wish, but more, exudes the kind of political sensibility that we need. 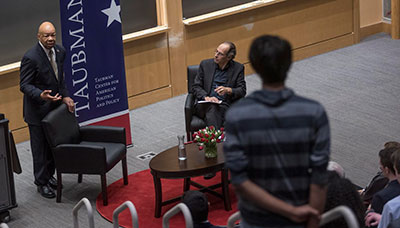 Cummings began by talking about Freddie Gray, someone from his neighborhood. He spoke at his funeral, but asked tonight, as he did then, how many people knew that young man, would recognize him, while he was alive. That non-recognition, that non-connection, that alienation from one another is the basis for the polarization in our society, he said, and the basis for our self-destruction. We face, he says, the "fierce urgency of now," and we need to recover the basis for our hope. No longer can we accept the refrain sung by so many, that "nobody cares about us."

After Cummings's talk, someone asked about how to appeal to the alienated who embrace Trump. Cummings said, simply, that we need to feel them, we need to see them, we need to recognize them too. And that perhaps we might be able to work with them to find a future together. That, at least, is what I heard; others may elaborate/correct me. But all will agree: we were in the presence of a transformative actor, one who radiated an integrity that could inspire.

Michael D. Kennedy
Professor of Sociology and of International and Public Affairs