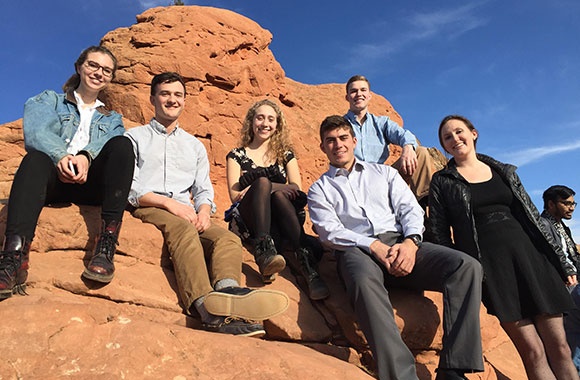 “My generation has a predisposition to not use military force, but that doesn’t mean we shouldn’t consider [it]."

Students Learn the Intricacies of Geopolitical Maneuvering Through Simulation

Iran may be hiding nuclear centrifuges, a possible breach of the nuclear agreement with Iran; Israel and Saudi Arabia are exploring military action against Iran; and the Iranian Revolutionary Guard took an American journalist hostage.

Those scenarios are not "ripped from the headlines." Rather, they were part of a simulation project, “Crisis Solution: Dealing with Ambiguous Iranian Compliance with the Iran Nuclear Deal,” a Mellon Foundation project, in which Julmar Carcedo ’16, Matthew Jarrell ’18, and Austin Meyer ’18 participated. They were among 33 students from liberal arts colleges and universities and military academies to serve on a National Security Council interagency team tasked with developing nuanced, thoughtful domestic and foreign policy options for the president to implement. Throughout their day-and-a-half simulation, participants attended briefings and strategy meetings and deconstructed multiple intelligence and counter-intelligence reports, all addressing a troubling and constantly evolving array of military, diplomatic, and political challenges. The U.S. Air Force Academy in Colorado Springs, Colorado, hosted the March 3-5 simulation project.

Eckert believes these three Brown students may “infect” students across campus with their enhanced geopolitical acumen, understanding of Iran, and appreciation of the military’s role.

Breaking down barriers and building relationships between future military and civilian leaders is just one benefit of these Mellon Foundation initiatives, according to Sue Eckert, a senior fellow at the Watson Institute who oversees Mellon funding opportunities for Brown students, including this most recent Air Force Academy exercise under the leadership of Dickinson College. She’s one of several faculty members involved in launching a new Watson Institute Iran Sanctions Implementation Project, a database of sanctions U.S. states have imposed against Iran. Other faculty participants include Ross Cheit of the Taubman Center, Sarah Tobin of Middle East Studies, and Jo-Ann Hart of the Watson Institute’s security program. Jarrell, who will pursue employment with a U.S. intelligence agency, and Meyer, whose career plans focus on the State Department, both study Persian and serve as research assistants on the project, whose website will go live soon.

Concurring with Eckert, Meyer and Jarrell realized that the participating cadets had no desire to rush into military conflict, yet recognize the need for a strong, prepared military as an essential counterbalance to diplomatic efforts.

Eckert believes these three Brown students may “infect” students across campus with their enhanced geopolitical acumen, understanding of Iran, and appreciation of the military’s role. Jarrell anticipates that he, Meyer, and Carcedo may serve as change agents on two specific issues: first, to educate students that Iran, despite its ideological differences with the United States, is potentially moving away from its status as a rogue state; and, second, that the U.S. military shares our common interests. “We’re partners; we shouldn’t set ourselves against each other,” says Jarrell, who served as director of the National Counterproliferation Center.

“My generation has a predisposition to not use military force,” says Meyer, appointed a State Department undersecretary for political affairs, “but that doesn’t mean we shouldn’t consider [it].” One of the simulation’s biggest controversies focused on whether – and how – to employ military options. By introducing the military’s analysis of evaluating a proposed policy’s feasibility, acceptability, suitability, and risk, the faculty advisor guiding Meyer’s group clarified how policies are built painstakingly from the ground up.

Although Eckert, Jarrell, and Meyer strongly champion the Iran nuclear deal, as negotiated by the Obama administration, simulation participants’ perspectives and recommendations often diverged, as they would in any actual international crisis. Homeland Security personnel prioritized rescuing the American hostage, while State and Defense personnel had the upper hand, insisting other priorities took precedence, says Jarrell, who called the decision-making process a moral dilemma.

The process of getting these influential bureaucracies together – with all their different interests and agendas to collaborate – is very complicated,” says Jarrell. “I have a new appreciation for how difficult it is to manage these crises in the federal government.”

The simulation, says Meyer, had a true sense of urgency and deepened his understanding of how policies are formulated, using the military’s risk assessments, and then impact domestic issues. Of the agreement, Meyer says, “It’s the best compromise we can reach.”