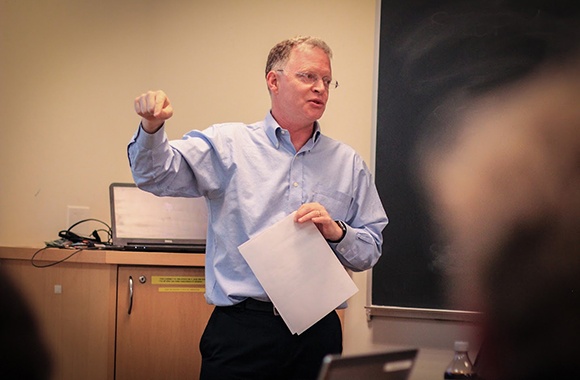 “His life is a wonderful vehicle for looking at American foreign policy for the last almost 50 years. He was in Vietnam less than a year after graduating from Brown, he was in Bosnia in midlife, and then ended his life in Afghanistan and Pakistan.”

Richard Holbrooke and the Rise and Fall of American Power

A tired-looking face filled the big screen. Hasan Nuhanovic, speaking via Skype from Sarajevo, where it was well after midnight, talked about the 1995 Srebrenica massacre of 8,000 Bosnian Muslims during the Bosnian War. At that time, Nuhanovic was a translator for Dutch peacekeepers in Srebrenica, which had been designated a “safe area” by the United Nations. When Serbian soldiers overtook the city, thousands of Muslims fled to a nearby U.N. base for protection, but were forced to leave. Nuhanovic’s parents and brother were among those massacred. The U.N. was the Bosnian Muslims’ only hope, he said. “We didn’t think the Serbs would do anything bad because the whole world was watching.” Asked how Slobodan Milosevic, the Serbian leader, incited people to commit crimes, he said, “It’s like asking a question to explain evil. Thousands of people were killed for no reason—unarmed people.”

Nuhanovic was addressing about 20 students seated around a conference table in a Watson classroom, part of a seminar taught this spring by Senior Fellow David Rohde ’90 titled Richard Holbrooke and the Rise and Fall of American Power. Richard Holbrooke ‘62 was the chief U.S. negotiator of the Dayton Accords, which brought peace to the region in November, 1995, just months after the Srebrenica massacre. Holbrooke’s diplomatic career is the lens through which the class is analyzing U.S. military interventions in Vietnam, Bosnia and Afghanistan. “His life is a wonderful vehicle for looking at American foreign policy for the last almost 50 years,” said Rohde. “He was in Vietnam less than a year after graduating from Brown, he was in Bosnia in midlife, and then ended his life in Afghanistan and Pakistan.” Holbrooke died on December 13, 2010.

Rohde came to campus last fall for a screening of The Diplomat, a documentary film for HBO made by Holbrooke’s son David about his father’s career, and Rohde, David Holbrooke, and executive producer Marshall Sonenshine ’82 sat on a panel together. That evening, said Rohde, he and Richard Locke came up with the idea to create a class about Richard Holbrooke—“this amazing Brown graduate.” The idea was also spurred by the sense that “there’s not enough focus in American politics—or in American political debate—on diplomacy.” U.S. international relations, Rohde said, is either focused on military intervention or remaining isolationist and doing nothing. Holbrooke’s life “is an example that there are other approaches.”

But Rohde stressed that this class is “not a hagiography of Richard Holbrooke,” and described him as a sometimes abrasive and polarizing figure. “It’s remarkable what he achieved and did,” Rohde said, but, you know, he made mistakes.” The two first met in Bosnia, where Rohde was working for the Christian Science Monitor; as a journalist he covered the diplomat, intermittently, for 20 years. Rohde also has a deep personal connection with Holbrooke, who freed him from captivity twice, once when he was held by Serbs in Bosnia and later when he was kidnapped by the Taliban in Afghanistan. “I felt that he mellowed and the way he treated me after my kidnapping in Afghanistan was far kinder than after my detention in Bosnia,” he said. Rohde speculates that after his “crowning achievement” bringing peace to Bosnia, “by the time Afghanistan comes around, he’s less driven and he’s kind of made his name already.”

Rohde came to campus last fall for a screening of The Diplomat, a documentary film for HBO made by Holbrooke’s son David about his father’s career, and Rohde, David Holbrooke, and executive producer Marshall Sonenshine ’82 sat on a panel together. That evening, said Rohde, he and Richard Locke came up with the idea to create a class about Richard Holbrooke—“this amazing Brown graduate.”

One question the class is trying to answer is why diplomacy in Bosnia was more successful than in Vietnam and Afghanistan. The support of the local population is key, Rohde said, and in the case of Bosnia, Russia was relatively weak. “If Vladimir Putin had been in power in 1995, I don’t think there would have been the Dayton Accords,” he said. “He would have just encouraged the Serbs to resist.” As for the other two interventions, “there are incredible parallels between Vietnam and Afghanistan in terms of Holbrooke personally being involved and efforts to win the support of the local population through agriculture and schools, and a better life,” he said. “And, you know, it fails both times. It calls into question the ability of the U.S. to carry out these efforts. Are we too impatient? I don’t know. So we’re debating all this in class.”

What brings this history to life in an extraordinary way is the impressive army of guest speakers that Rohde has amassed to help students sort out these issues and learn more about Holbrooke’s life. Some will speak in person; others, like Hasan Nuhanovic, will be on Skype. Students seemed enthusiastic and slightly wide-eyed at the access to so many important people. First are family members, who Rohde says are excited about participating: Holbrooke’s first wife, Litty ‘63, whom he met at Brown, his two sons, David and Anthony, and his third wife, Kati Morton, the author of eight books and a former NPR and ABC News correspondent, are all on the roster. (Litty, Rohde said, talked about what Brown was like when she was a student circa 1960 and women had to wear skirts on campus.) Other guest speakers include Christopher Hill, a former ambassador, member of the U.S. negotiating team in Dayton, and the author of Outpost: Life on the Frontlines of American Diplomacy; George Packer, a New Yorker writer; and Samantha Power, U.S. Ambassador to the U.N. and co-author of The Unquiet American: Richard Holbrooke in the World.

The focus on Holbrooke’s career and the guest speakers are ultimately “an effort to get students to consider careers in public service—whether it’s being diplomats, or aid workers, or journalists,” said Rohde. In one class, Rohde shared his own early struggles—the unpaid internships, the low-level job that involved picking up dry-cleaning, the freelancing—en route to becoming a Pulitzer Prize-winning journalist. However, Rhode said that when he asked the students if anyone planned to take the Foreign Service exam after college, no one raised a hand. Not yet, at least.