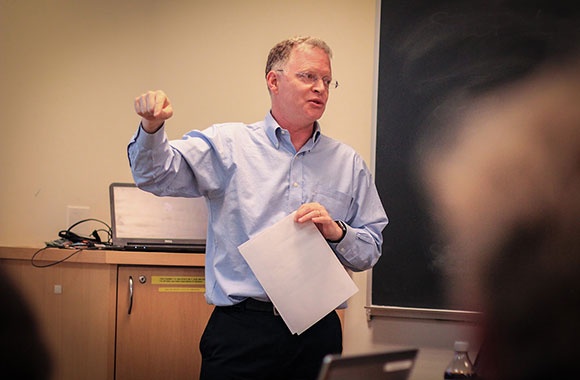 "I remember when I covered the war in Bosnia in the 1990s, journalists weren’t liked by the different sides in the conflict, but there was a sense that the sides wanted to use—or needed to use—foreign journalists to get their message out to the wider world."

On the Future of Crisis Reporting

An interview with David Rohde

The Brown Journal of World Affairs is a semiannual journal of international relations and foreign policy produced at Brown University's Watson Institute for International and Public Affairs. The Journal features original articles by and interviews with world leaders, policymakers, and prominent academics. In it's most recent issue, the BJWA interviewed Watson Senior Fellow David Rohde on the importance of foreign journalism. To subscribe to the journal visit their website.

Below is an excerpt from the piece:

Brown Journal of World Affairs: Over the course of your career as a foreign correspondent, you’ve been held hostage on multiple occasions and reported from some of the most dangerous regions in the world for journalists. What would you say are the greatest risks facing journalists working on issues of international security today? What impact do such threats have on the quality of reporting?

David Rohde: Sadly, it’s more dangerous than ever to cover these conflicts. I remember, when I covered the war in Bosnia in the 1990s, journalists weren’t liked by the different sides in the conflict, but there was a sense that the sides wanted to use—or needed to use—foreign journalists to get their message out to the wider world. You weren’t liked, but you were somewhat respected as an outside party. Today, the parties in a conflict can get their message out directly, through Twitter or YouTube. And foreign journalists are seen as enemies, sources of publicity, or sources of ransom. I’m a huge fan of the Internet, but it’s created unintended complications for journalists who are trying to cover these conflicts. Over the course of 20 years, there’s been a shift where foreign journalists went from being not liked but sort of respected as neutral outsiders, to open targets. They’re vilified by governments, abducted by different factions, and not given any protection. And the saddest part of all of this is that there is less coverage. When the Assad government first targeted journalists intentionally—Marie Colvin and several other journalists were killed in a shelling by the Syrian gov-ernment—and then the Islamic State (IS) murdered James Foley and Steven Sotloff and others, it created a chilling factor that leads journalists not to go into Syria. I think that lack of press coverage has made it easier for the inter-national community to ignore Syria. The dangers are sadly limiting the flow of information and coverage.