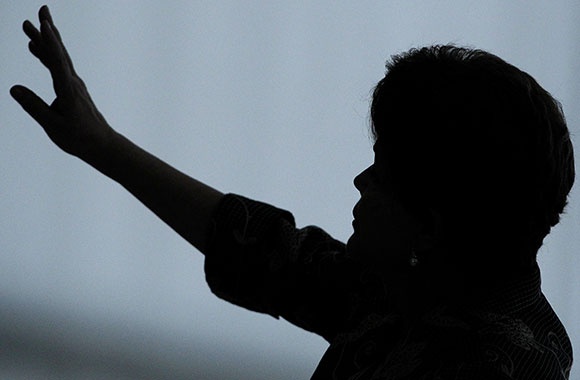 "Whether newly installed President Michel Temer can fix the economy, implement a set of promised reforms in the social security system and labor laws, and beef up his public approval, which is in the low teens, remains to be seen."

What Next for Brazil?

The Senate impeachment vote on Wednesday, August 31, 2016, removed Brazilian President Dilma Rousseff from office by a hefty two-third majority. The decision ends thirteen years of the left-leaning Workers’ Party in power. It also marks a dramatic shift in the direction of Brazilian politics, the economy, and perhaps even the signature poverty-reduction programs of Rousseff and her predecessor Luiz Inácio Lula da Silva. Whether newly installed President Michel Temer can fix the economy, implement a set of promised reforms in the social security system and labor laws, and beef up his public approval, which is in the low teens, remains to be seen.

In May 2016, the Chamber of Deputies charged President Rousseff with violating budgeting procedures that it considered impeachable “crimes of responsibility.”  Many of her supporters argued that these accusations were actually a pretext to overturn the results of the 2014 presidential elections. In that race, Rousseff was re-elected with 54.5 million votes and a 3.2 percent margin over her opponent Senator Aécio Neves of the Brazilian Social Democratic Party.

Those favoring impeachment insisted that the President had, in fact, violated budgetary legislation, and her inability to govern (ingovernabilidade) justified removing her from office. However, tape recordings with politicians accused of engaging in money laundering and siphoning off state funds through fake contract agreements, revealed earlier this year that at least some leading figures in the opposition to Rousseff saw the impeachment process as an effective way of putting a stop to the Operação Lava-Jato (Car Wash Operation) corruption investigation. Initially focused on people linked to the Workers’ Party, individuals engaged in plea bargaining agreements with federal judge Sérgio Moro also made corruption allegations against politicians of Temer’s Party of the Brazilian Democratic Movement, as well as members of his new government coalition.

A center-right bloc of 61 Senators cast their vote to impeach the president. The 20 who opposed the measure argued that it was no more than a “parliamentary coup d’état.” In a second 43-36 vote with three abstentions, the Senate decided not to take away Rousseff’s political rights. Had that measure passed, the former president would not have been allowed to teach in a public university, run for elected office, or carry out any other “public function.”

Some have pointed to a statement made by Senator Acir Gurgacz from the state of Rondônia, when he stepped out of the chamber to explain why he voted for impeachment, as an indication of the political rather than juridical nature of the proceedings: “We were convinced that there was no crime of responsibility in the trial, but there was a lack of governability, and the return of the President at this time could cause greater trouble for the Brazilian economy.” Most Senators favoring her impeachment, however, insisted that although their statements of the floor of the chambers reflected criticisms of Rousseff’s overall governance, their vote relied on evidence of budgetary improprieties.

Although not among the formal charges leveled against Rousseff, export earnings have tumbled in recent years, growth has slowed dramatically, and unemployment and inflation have increased significantly. Some have characterized the economic situation as Brazil’s worst economic crisis ever, although those who remember similar unemployment rates in the late 1990s and triple-digit galloping inflation in the 1980s, might beg to differ. Still on-going revelations related to the plundering of Petrobras, the state-owned oil company, as well as other enterprises, which involved members and supporters of the Workers’ Party (but also politicians who now form part of Temer’s new government), indubitably undermined support for Rousseff over the last year and a half.

Soon after President Temer was sworn into office, ex-President Rousseff spoke to her supporters promising to continue the fight for social justice. She expressed concern that many of the social programs of the Lula-Rousseff administrations would be rolled back and labor and social security benefits curtailed. She also pondered whether corruption investigations would continue.

Observers of all political stripes are also wondering whether the corruption investigations will come to a halt when members of the Workers’ Party are brought to trial, leaving others scot-free. Some journalists are asking if Temer has the political backing to put the economy on the right track and pass labor and social security reform measures that might cut many people’s job protections and benefits. Social scientists who have focused their research in recent years on examining poverty-reduction initiatives, such as the world-famous cash-transfer program Bolsa Família, are questioning whether this and other programs will be curtailed in the name of fiscal austerity.

What is certain, one can safely predict, is that Brazil’s immediate political, social, and economic future is, unfortunately, quite uncertain.