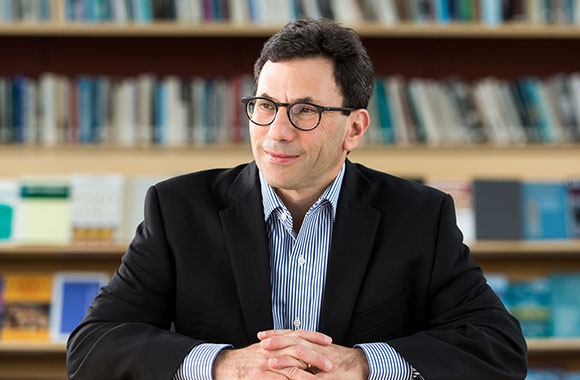 "The U.S. health care system spends more than any other in the world … but we don’t get good value for our money. A major reason is because medical prices are high, but we also spend a great deal on treatments of dubious worth."

Healthy Change: Why Some Policy Reforms Stick & Others Are Dropped

On July 1, Eric Patashnik joined the Brown faculty as Julis-Rabinowitz Professor of Public Policy and professor of political science. He will teach courses on policy analysis, system dynamics, health policy, and U.S. political institutions, and this past summer taught Foundations of Public Policy to the new cohort of MPA students. He is co-author of the widely used A Practical Guide for Policy Analysis: The Eightfold Path to More Effective Problem Solving. A future conversation will reveal his vision as the director of the undergraduate Public Policy program, and incoming director of the Watson Institute Master of Public Affairs Program (effective January 1, 2017).

WI: Your work seems to sit squarely at the intersection of policy and practice—in other words, policy as it plays out in the real world. Can you elaborate?

EP: My doctorate is in political science, but I also have training in public policy. My research focuses on both the politics and substance of American national policymaking, especially in the areas of health care and fiscal policy. I see political science as a source of “usable knowledge” that can help us to understand why government works the way it does—and how it can perform better. Back in the late 1980s and early 1990s, I worked as a congressional staffer on the House Subcommittee on Elections, on issues like the “motor-voter” registration bill and campaign finance reform. It was eye-opening to see firsthand how our legislative process works.

In one of my books, Reforms at Risk: What Happens After Major Policy Changes Are Enacted, I examine why some major policy reforms stick and become deeply entrenched while other reforms are abandoned in subsequent policymaking. This is an important concern as we look at the still-uncertain fate of the Affordable Care Act.

Early on I wrote that the ACA was likely to have a very rocky post-enactment development—for several reasons. First, Obamacare passed on a partisan vote. Historically, major social welfare breakthroughs like the Social Security Act 1935 and the Medicare Act of 1965 have had some degree of bipartisan support on final passage. We’re in a much more polarized and electorally competitive period than during the New Deal and Great Society eras, and political battles increasingly continue after laws are enacted.

Another reason is that the Affordable Care act is really not one program but a series of programs—it’s a subsidy program, a categorical grant program, a regulatory program, a taxation program. The ACA treats different groups of Americans in different ways, depending in part on where they live. The law is also highly redistributive. All that has inhibited building public support and mobilizing a constituency around the ACA, the way senior citizens identify with Social Security and Medicare and regard their benefits as “earned rights.”

While I don’t think the law will be repealed outright, it’s still vulnerable to erosion. The fate of the law will depend in part on future election outcomes and the stability of the exchanges, but also on whether the law will generate what political scientists call “positive feedback” effects—whether it will enhance citizen participation and encourage groups to defend the law against threats. Thus far the feedback effects have been fairly anemic.

WI: Your current work focuses on the cost and quality of health care in America. Which aspects in particular are you exploring?

EP: I have a forthcoming book (coauthored with Alan Gerber of Yale and Conor Dowling of University of Mississippi) titled Unhealthy Politics: The Battle Over Evidence-Based Medicine in the United States (forthcoming from Princeton University Press). It’s about the political struggle to make the American health care system more evidence-based and cost-effective.

The U.S. health care system spends more than any other in the world … but we don’t get good value for our money. A major reason is because medical prices are high, but we also spend a great deal on treatments of dubious worth. When a new drug comes on the market, the FDA will examine whether it’s more effective than placebo, but we often lack reliable information about whether the new drug is more effective than an existing drug on the market, or whether there’s another, better way of treating the same condition. For example, if a patient is suffering from back pain. What’s the best way to treat it? Drug A, drug B, back surgery, physical therapy? Which treatment offers the most “value for money”? Americans need to know the answer to those questions if we’re going to deliver highly quality, cost-effective care. The reality is that patients, providers, and payers often lack the information to make those decisions.

A related problem is that medical procedures and surgeries can diffuse into widespread clinical use even in the absence of solid information about their clinical effectiveness. There have been many instances where patients received dangerous treatments that were later found to be ineffective when rigorously evaluated.

The book examines the politics surrounding these issues. The study features public opinion surveys and survey experiments, so we can measure the degree to which ordinary Americans understand the “medical guesswork” problem and what reform options they’re most open to, as well as case studies of the use or non-use of evidence in particular areas, such as orthopedics. Our surveys suggest that Americans have a tremendous fear of interference with the doctor-patient relationship by government or insurance companies; they only trust doctors to decide what treatments are most appropriate. And so it’s really only by physician leadership that we’ll see real reform. Unfortunately, medical societies have not led on this issue. They have often supported reform in the abstract, but when it’s come to their particular practice areas, they’ve become aggressive in blocking rigorous examination of the costs and benefits of the procedures they themselves prescribe. That’s part of the challenge we have in this area. We conducted physician surveys to better understand how doctors think about these issues, and found that many doctors want their medical societies to play an “attack dog” role when the effectiveness of treatments in their areas are challenged. This is a breakdown of professional responsibility.

WI: Can you describe your work at the Watson Institute?

EP: My role at Watson is multi-pronged. I’m a teacher and researcher, and I also serve as editor of the Journal of Health Politics, Policy, and Law. In this multidisciplinary journal, scholars focus on the implementation of the ACA and the political development of programs like Medicare and Medicaid, but we also ask broader questions about the implications of health policy for the way in which our democracy works. And the journal not only rigorously investigates today’s policy questions, but also puts today’s policy debates in a broader historical and institutional context.

The journal had been at Brown many years ago. [Director of the Taubman Center] James Morone was editor in the late ’80s and early ’90s. So it’s a return home for the journal, and I’m enormously grateful to the Watson Institute for providing the administrative support to make this possible.

WI: You have said that with the journal you want to create a space where policy and politics can come together. What do you mean by that?

EP: Many health care experts examine public policy problems with little attention to the political feasibility of solutions. Many political scientists examine what Congress does or doesn’t do in the health care arena without a rigorous analysis of the effect of those choices on families, businesses, and communities. We’re trying to connect the substantive investigation of policy decisions to the political debate over how best to address them.

Every editor puts his or her own stamp on the journal. I’m excited to have created two new special sections: one on the policy and politics of health care reform, which focuses on health reform at state and federal levels. The other section, “Beneath the Surface,” interrogates and challenges conventional wisdom about the health policy system. We unpack terms that are used and misused and bring a critical lens to claims that are in circulation but require great scrutiny.

WI: Are you optimistic about health care policy in US?

EP: I’m pessimistic about the chances of fundamentally transforming the U.S. health care system, but optimistic that a series of reforms—if sustained—could produce much better outcomes for both individuals and the nation. Nobody would design the current U.S. health care financing and delivery system from scratch. It is a complex, public-private mishmash. We are almost unique among wealthy democracies in resisting a government-run public system, yet we also have been unwilling to tolerate the outcomes of a pure market-based system. The dilemma of U.S. health care reform is that we have not made a choice. We combine market forces with subsidies, tax preferences, and regulations. We want to let citizens select their doctors and insurance plans, but we also want to ensure that everybody is covered. We want to control costs but we don’t want to give government the authority to dictate prices. In sum, we’ve been unable to square our ideological conservatism with our operational liberalism. Health politics and policymaking is the perfect setting in which to see the dilemmas and tensions of the American character play out.