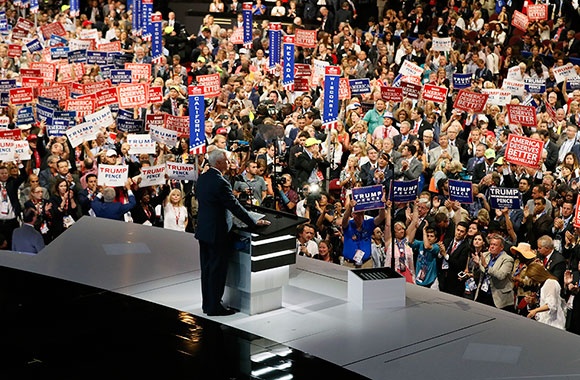 The Fantasy of Trump

As the RNC concludes, Professor Kennedy discusses the "Fantasy of Trump"

When we reference ideologies, we can mix up political self-understanding with the analytical and critical accounting of communicative action. Depending on who she chooses as a running mate, we can debate whether Secretary Clinton is really a progressive, but to focus on Clinton’s self-understanding and the ideological connotations of her policy and personnel choices is less important than analyzing how ideology works in the Time of Trump.

There is substantial scholarly work articulating Trump with fascism, made all the more compelling because it serves to warn us of a fascist future America has so far avoided. Others connect Trump with the ideology and practice of white supremacy. Nell Painter, marks a steady history of violence against people of color and sometimes their white allies; she figures Trump’s success as resentment for a black president and all that accompanies Obama’s leadership. [Painter, 2016.]

Trump and his defenders can defend his implicit and explicit racist and fascist speech by declaring he stands opposed to political correctness. They say he expresses the real frustrations of the American people. But in that very declaration, this coterie declares their whiteness and superiority without ever saying, explicitly, that white supremacy is the route to make America great again.

Of course Trump may never declare that he is a fascist or white supremacist, but that is not how ideology works in these times. Trump knows how to turn any news into useful news. Melania Trump’s presentation with plagiarism only becomes evidence that the rules of educated society don’t apply to Trump. [Isaac, 2016.]

Trump’s communicative power is realized through a celebrity culture that not only seeks salvation in the Übermensch; it finds in the fantasy of beautiful blonde adult children and the ex-model wife an escapism that appeals to those who feel abandoned by policy wonks, free traders, movement activists, academics, and conventional politicians. [Kennedy, 2015.] These people, in their alienation from the world that exists, enjoy Trump.

Fantasy is different from ideology. It needs neither coherence nor evidence, for it is not designed to reflect or operate on reality. It is designed to constitute a reality that even its believers know is not real. The Republican National Convention is the latest performance of a fantasy that derails the relevance of conventional policy and politics.

As crises and conflict accumulate, Americans could become afraid that an ideology that embraces them all will be destroyed by the violence of the few, feeding the fantasy that order demands the return of a real man to power even if they, themselves, are not white supremacists and fascists. The convention presents us this salvation.

We have seen how this works across the world. Putin blazed the trail with war in Ukraine ensuring authoritarianism in his Russia. Erdogan has followed suit in Turkey, finding the perfect opportunity in a bungled and possibly planted coup. Trump and his promoters take note and whip up desire by positing threats (immigrants, Muslims, crooked politicians) to an order that might only be fulfilled if a strong man leads.

Secretary Clinton and her allies may think they are running a convention and campaign against another politician, but this 2016 election is not about politics as usual. Trump mobilizes fantasy and escapism against which reason and evidence can’t win. What might?

-Michael Kennedy
Professor of Sociology and International and Public Affairs

Find the full version of Michael Kennedy's, "Ideology in the Time of Trump" here.