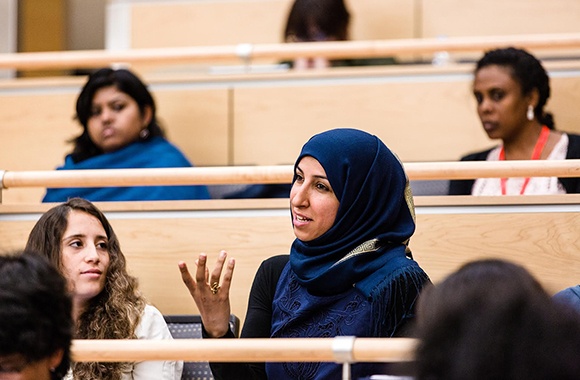 "[The Director of BIARI] emphasized that sharing knowledge among the participants is a very important tool to educate and raise the awareness level of the participants. The knowledge and information we shared, whether academic or from the field, were the core value of this course."

Ghada Hassan, a 30-year-old humanitarian aid worker, left her native Yemen to spend two weeks attending the Brown International Advanced Research Institutes. Here she remembers what it took to get here, and what she took away.

May 9, 2016, is one of those days which will stick in my mind for the rest of my life. It is the day when I booked my interview to get my U.S. visa.

My mission had just begun, and I already faced many challenges. It was a formidable task. The American embassy in Sana’a, Yemen, was closed. I had to fly to the nearest country, Jordan, and book an appointment for the interview.

I went on line to book my interview in Amman, but I couldn’t do it. Time was flying away. I had to go to plan B: I decided to seek help from a friend in Amman, who supported me and helped to get me the appointment.

Next I had to get the flight booking. There were no commercial flights from Yemen, only United Nations Humanitarian Air Service to Djibouti. There was no direct flight, and my trip covered 22 hours and several African cities (Djibouti, Addis Abba, Cairo) before I reached my final destination, Amman.

I reached Amman extremely exhausted, but I had to prepare for the embassy appointment. I could not sleep that night. I was concerned that if I slept I might be late and not obtain my visa to the United States.

I woke up very early. My breakfast was brief. I went to the embassy. I was one of 120 people applying for the visa and only a few got the visit.

I returned to Sana’a using the same route, yet this time I was accompanied by mosquitoes. For almost six hours in the Djibouti airport, they feasted on my face.

From the moment I arrived back in Sana’a, I started preparing my flight arrangements to the States. This trip was easier than the first time. However, I had to stay in Djibouti two days, where the temperature was 48 degrees Celsius. I could not sleep, eat, rest. And of course I was the mosquito’s most favorite meal once again.

The third day was my traveling day. I travelled from Djibouti to Doha, but the plane arrived late, at 6:00 p.m. The airport was very crowded; three full flights had arrived at the same time. My next flight was at 6:30 p.m. and again time was flying. I went through the checkpoint and started running like a marathoner to the boarding gate. People were looking at me and wounding if I did something I was running from. Doha airport is very big and I was not very sure that I could make it on time. I reached the gate with the last departure announcement to Boston. To be honest, I felt embarrassed when I took my seat in the airplane, but I didn’t care much. My heart, mind, and soul were on how to get on the airplane and nothing else.

It was late afternoon when I arrived to my final destination. I was so tired but yet very excited and on the tenterhooks for tomorrow to come and start my course. When I arrived at Boston airport, the desk officer asked me where I came from. I briefed him on the stations that I passed by. His next question with big surprise drawn on his face was, “Are you sure that it is worth it?”

It took me a second to reply, “Of course it is. In every challenge I faced, I became more confident and sure that it is worth it.”

A wise advice was given by the director of BIARI on the first day of the course. He emphasized that sharing knowledge among the participants is a very important tool to educate and raise the awareness level of the participants. The knowledge and information we shared, whether academic or from the field, were the core value of this course.

Our comments and observations as participants were taken seriously by the lecturers. Group works and simulation exercises were the window that we used to practice what we had learned.

BIARI was a whole new world for me. We learned how the humanitarian aid interacts with development support in different contexts. In two weeks, we discussed most of important humanitarian aspects and the related development topics (theoretically and practically).

Those two weeks I will keep remembering and talking about for the rest of my life, two weeks full of motivation, stimulation, knowledge, joy, and diversity. Participants came from different countries with variety of cultural back grounds and careers were part of the course. The course I am proud to be part of.

BIARI turned out to be not only a learning course, but also a lifetime experience that no book could give. A bridge between the practitioners and the academics, BIARI allowed us to exchange experience in beneficial ways for both sides.

I still remember the happiness I felt when I held my BIARI acceptance letter. It is the same letter that helped to diminish the pain for what was going on in Yemen and the unjustified war we were all suffering from.

Today, after the BIARI course, I can confirm it is indeed worth it. And if I have another chance, and I have to go through all those tough experiences all over again, I will not hesitate accepting the opportunity. Long travels, queues, mosquitoes, booking, running, and many more are nothing comparing to the knowledge I gained and the experience I had in BIARI.