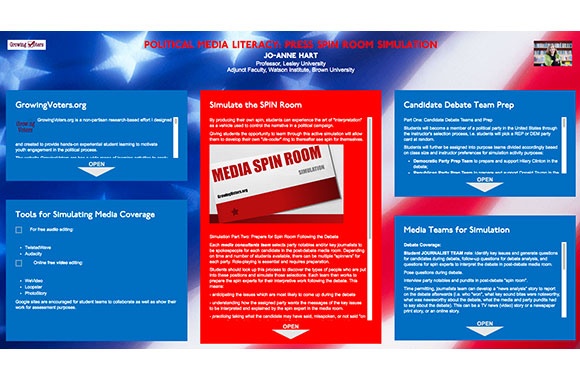 “International politics and national public affairs are greatly affected by [the U.S. president], and GrowingVoters.org wants to encourage an informed, participating electorate.”

Pew Research Center data confirm what we anecdotally know: Voter turnout in the United States during presidential elections is abysmal. With 53.6 percent of eligible voters voting in the 2012 presidential elections, we ranked 31st among 35 member countries of the Organization for Economic Cooperation and Development.

Jo-Anne Hart, adjunct professor of international and public affairs at the Watson Institute, believes early intervention will lead to a larger cohort of knowledgeable, thoughtful voters. To that end, in 2004, Hart created GrowingVoters.org, richly populated with nonpartisan and intriguing classroom activities, lesson plans, and resources designed to increase students’ interest in and knowledge of political and electoral processes, even before they can vote. “Voter apathy is persistent; there’s empirical evidence that if you don’t get someone early, you may never get them to vote,” said Hart, individually funding this initiative, is also a professor at Lesley University in Cambridge, Mass.

The Watson Institute’s mission of promoting a just and peaceful world through research, teaching, and public engagement resonates with GrowingVoters.org, Hart said. “International politics and national public affairs are greatly affected by [the U.S. president], and GrowingVoters.org wants to encourage an informed, participating electorate.”

Thousands of teachers – representing all 50 states and the District of Columbia – have downloaded the website’s free materials, said Hart, who had initial support from Lesley University’s Graduate School of Education and some of its students to develop the website. GrowingVoters.org originally offered materials to elementary, middle, and high school teachers; this summer, Hart is adding college-level programs; many materials can be scaled to different grade levels.

“GrowingVoters.org presents tools and options for [students of all ages] to critically think through issues,” she said. Activities can be broken into sections from which teachers can pick and choose, said Hart, who recently put the finishing touches on a new simulation, “HACK the Spin.”

Ideal for a high school or college political science or journalism class, “HACK the Spin” involves a simulated political debate, with preparation teams for the Democratic and Republican candidates, and a media team to interview other politicians post-debate in the “spin room.” Students must work out many of these issues in advance, said Hart, “and they learn it’s not really what’s said [in a debate] but what do you want to reinforce or reshape a message?” The media team could prepare different versions of the debate coverage for Fox News, MSNBC, radio, and The Washington Post. “It’s such a rich array of learning opportunities,” said Hart. “It’s like sausage being made; they can see the spin … even when you’re all seeing the same thing, people … interpret it in different ways.”

GrowingVoters.org offers creative, enticing lesson plans for even very young students. A second grade class of roving reporters might interview adults about how they believe their local concerns should be addressed at the national level. Students could create individual PowerPoint slides depicting their results, compare and contrast their respective findings, and with technology, share them with other classes and other schools.

“These comprehensive lesson plans extend beyond social sciences, with many great math, media, history, art, and language arts lessons. When students create something and own that material, I think it has a more lasting impact,” said Hart. Given this election cycle’s highly contentious, polarized and divisive environment, it’s particularly timely that Hart has included new materials that teach active listening skills, respect in political debates, etc.