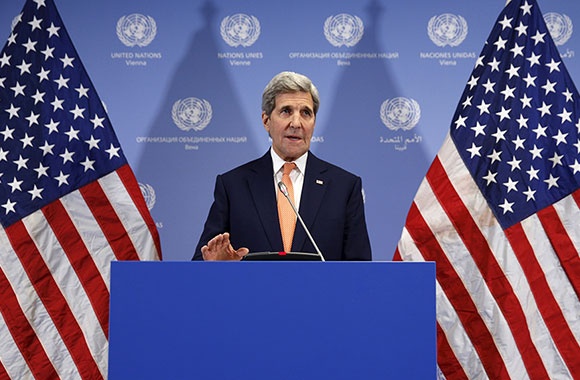 "The investment returns California might have seen from this growth sector could be viewed as a loss due to its own sanctions. Some states allow an override on divestment in Iran to guarantee a fiduciary responsibility to state funds' investors. It depends on the politics and the economics of the state."

State-Level Sanctions Against Iran: Why Do They Matter?

Even the most keen observers of the JCPOA might not realize that in addition to numerous executive and congressional sanctions, many individual states also have sanctions against Iran. States’ sanctions call for divestment in Iran and banning business with Iranian companies.

According to the team, this warranted research for a number of reasons both academic and policy related. The research identifies and maps out both the types and the impact of Iran sanctions across the 31 states that have them so far. The focus is on tracking whether states will push back against the federal government's requirement to dismantle sanctions in accord with the implementation of the international nuclear agreement.

Below the team answers questions about the sanctions and their findings.

Why does it matter if states have sanctions against Iran?

The most important impact of state government sanctions against Iran is that they may thwart the JCPOA, a landmark achievement in diplomacy. Sanctions relief for Iran is essential to the success of the nuclear agreement, yet many states are in a position to continue to punish Iran for unwanted behavior. State-level interference is also a potential challenge to executive branch authority in the conduct of US foreign policy: only some states include a provision to end sanctions if the federal government declares that state sanctions infringe on federal power. The terms of the signed nuclear agreement require the White House to “encourage” state and local authorities to “refrain from actions inconsistent” with the arrangements in the Iran agreement. Opponents of the Iran agreement, including lobbyists, can use state-level obstacles to intentionally undermine the agreement

What do states that impose sanctions stand to gain or lose?

State lawmakers who stand against Iran’s poor human rights record and/or its support for terrorism see sanctions as a strong way to punish Iran and induce it to change its behavior. Paying the associated opportunity cost of divestment and bans on procurement in Iran will vary by state. Two of the largest state funds in the US are in California and, by sanctions laws there, these teacher and retiree funds are restricted from investing in Iran’s energy or defense sectors. These funds have already divested more than $3 billion from Iran. The presumption is that the California pension funds simply invest elsewhere and that the state need not “lose” from its sanctions statutes. Yet because Iran's energy infrastructure needs are overwhelming, a bonanza of growth and international investment is imminent there. The investment returns California might have seen from this growth sector could be viewed as a loss due to its own sanctions. Some states allow an override on divestment in Iran to guarantee a fiduciary responsibility to state funds' investors. It depends on the politics and the economics of the state.

How does leadership in Iran view the state-level sanctions?

Iranian leaders are frustrated by the lethargic implementation of the sanctions aspect of the nuclear agreement so far. Four months into implementation, the Obama administration has freed up only a small fraction of frozen Iranian assets that have been held in American banks for decades, has not permitted the use of the US dollar for international trade deals with Iran, and has done little to fulfill its requirement to “encourage” US states to dismantle their investment, procurement, and insurance sanctions against Iran. Furthermore, the US Supreme Court recently ruled against Iran on compensation now due to former hostages. Iranians do not yet see much of the economic relief the nuclear agreement promised.