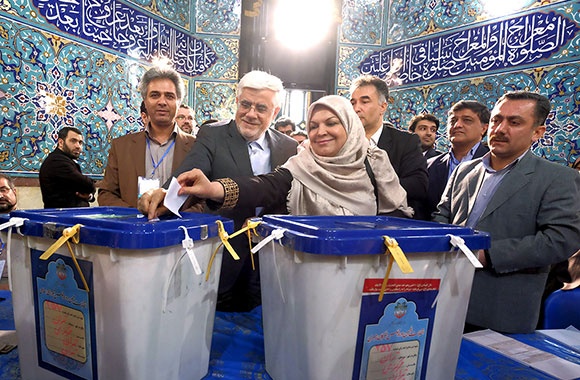 "These election results will keep things from getting worse for Iranians. If the hardliners had prevailed it would have become more difficult for President Rouhani to push forward his agenda of global liberalization of the economy and further political opening abroad."

Jo-Anne Hart, an adjunct professor of international and public affairs

Jo-Anne Hart, an adjunct professor of international and public affairs at the Watson Institute and a member of the Board of Directors of the international nonprofit Search for Common Ground, comments on the preliminary results of the recent national elections in Iran.

Why are these elections important?

These election results will keep things from getting worse for Iranians. If the hardliners had prevailed it would have become more difficult for President Rouhani to push forward his agenda of global liberalization of the economy and further political opening abroad. Also, he is up for re-election next year, and these election results bode well for his consolidation of power.

Factions in Iran’s politics are both fluid and important. A voting consensus developed between reformers and moderates, creating a “List of Hope” alliance that succeeded against the conservatives. In the parliamentary elections last week, the moderate bloc, allied with President Rouhani, did well. It looks like they captured all the seats from Tehran while the hardline conservatives lost dozens of seats overall.

In the other election, for the Assembly of Experts, the moderates also did well. This is the body that selects the successor to Iran’s supreme leader, Ayatollah Ali Khamenei. Ultra-conservatives lost ground to moderates.

Are the elections fair and free?

It’s a surprise to many Americans that Iran has a robust and legitimate electoral process. The wide range of views and the large number of contenders is truly noteworthy. It’s not an open system, in that not any candidate can run: a powerful government body, the Guardian Council, decides eligibility, which is based on standards that shift and regularly includes sweeping rejections. That said, once the candidates are slated the elections themselves are regarded as fair. Given the significant lack of representational governments within the region as a whole, it is meaningful that Iranians expect their votes to legitimately elect their political leaders. There is a longstanding culture of popular political participation in Iran that goes back more than a hundred years.

It is good news that Iranians hoping for change didn’t boycott the elections; however, despite the results, cynicism remains strong. If the ballot box could have brought internal reforms to the power structures within the Islamic Republic, it would have happened already. These 2016 elections follow a centrist success in the last Presidential election, are linked to the Green Movement in 2009, and connect as far back to the landslide victories for a reformer president in 1997 and 2001.

Will the election outcomes affect the nuclear pact?

The ability of moderates and reformers to find consensus in the election is not only a positive referendum on the nuclear deal but a broad-based attempt to protect it. According to preliminary reporting in the New York Times, “virtually every prominent critic of the pact was defeated.” President Rouhani has staked his political fortunes to Iran’s economic gains, which can only be attained by upholding the agreement. These elections create a greater political capacity to stick with the pay-out on the nuclear deal – the globalization of Iran’s economy – even while very conservative clerics still dominate the judiciary and the security forces.