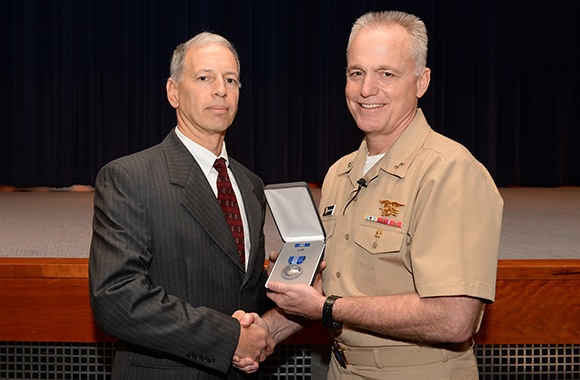 "The research seminars here are truly interdisciplinary and vary in methodology, both of which are intellectually refreshing."

What is the Superior Civilian Service Award?

The Superior Civilian Service Award is the Chief of Naval Operations' second highest award, which is humbling. The write-up cites certain qualities of leadership, management, innovative programs with a broad effect on the Department of the Navy, management, cost-saving, and some other things. I had a good team! Of course I was able to hire a number of them so I'm biased.

Can you tell us more about your experience at the Naval War College as it relates to the award?

The award is for certain accomplishments during my time as Dean of Academic Affairs. From 2009 to last summer I was fortunate to lead a dynamic team during challenging cycles of growth, contraction, and consolidation. We already had an excellent program but worked hard on our culture of self-assessment and renewal, to develop clearer standards for faculty performance, refine hiring and promotion protocols, improve rigor and diversity, elevate the use of academic technology, and incorporate the lessons of a decade of war. We created or expanded advanced programs on strategy and planning, revised our Elective program, and conducted major reviews of our two core curricula, for the Staff (early career officers and civilians) and War (mid-career) Colleges. In the end we were accredited for two distinct Masters Degrees. We also successfully dealt with four major inspections and accreditation processes, and managed several threatened and one actual government shutdown. As always such awards really should go to the entire team responsible for doing all the hard work, which are our some 200 civilian and military faculty members and their Chairs and Directors.

How has the Naval War College and Watson Institute partnership contributed to your research?

Two of the most valuable commodities for an academic are time and colleagues. I had no research time for six years, so being a fellow at the Watson Institute, an arrangement stemming from the MOU Brown and the War College (signed a few years ago to improve cooperation), provides both. I've been able to take up major projects that I had started a decade ago on military advice, civil-military relations, and the use of force, and have begun to collect material for a smaller project on Southeast Asian security, on which I also used to publish.

The research seminars here are truly interdisciplinary and vary in methodology, both of which are intellectually refreshing. It's been a pleasure to discuss ideas with the faculty here (the professional academics and the practitioners). Through these new Watson relationships I've also been pulled in two new directions: those of cyber security and humanitarian relief. I've learned a great deal watching the leadership at Watson and at Brown; if I go back into administration, this year will have been valuable in that respect, too.