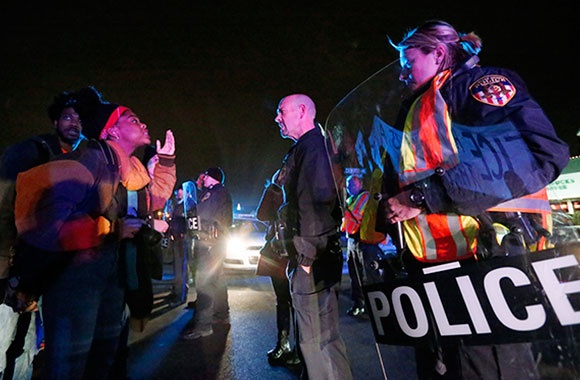 "No one method or approach can illuminate the full breadth or depth of what we’re looking at. We need different sources of evidence, different methodological techniques to produce the richest knowledge."

Postdoctoral Fellow in International and Public Affairs and Race and Ethnicity, Jordan Camp

It Doesn’t Have to Be This Way: Exploring Alternatives to Prisons and Over-Policing

The timeline of modern American history bulges with examples of police violence and civil unrest. But Jordan T. Camp, who studies structural racism, gentrification, mass incarceration, the militarization of cities, and social movements is not without hope for change. Invoking Marxist theoretician Antonio Gramsci, he says, “You have to have ‘the pessimism of the intellect and the optimism of the will.’ With these visions that are emerging – Black Lives Matter, Black Youth Project 100, the Los Angeles Community Action Network, and other grassroots organizations – we see changes that could otherwise take decades actually speed up in response to the current moment.”

Camp became interested in policing and prisons while doing graduate work in sociology at the University of California, Santa Barbara. Numerous social movements in the state were drawing attention to these issues, and Camp felt he had a role to play. “I thought that scholars should participate in these public debates, and it drove me into the archives. I went to Wayne State University to look at their archives on Detroit and the Tamiment Library at NYU. I consulted materials in the UCLA Film & Television archives, the Freedom Archives in San Francisco, and the Southern California Library in Los Angeles, among others. I also talked to people who’ve been eyewitnesses to these events. I interviewed the attorneys for the Attica prisoners … That combination of archival research, oral history interviews, and being in conversation with colleagues who are doing similar work really pressed me forward.”

“I feel as if I am a product of a series of conversations.”

By “archives” Camp emphatically includes “alternative archives” – poetry, music, films, and newspapers produced in dialogue with social movements. “I look at the ways in which artists and activists have used cultural productions to offer distinct ways of seeing dramatic events,” he explains. “I’m interested in the struggle over the meaning of these events.” An example, he says, is the Attica prison uprising. “Nelson Rockefeller and the New York Times give you one perspective. But if you look at the album by the jazz artist Archie Shepp, called Attica Blues, you get a much different perspective, one that was linked to the long civil rights movement. I’m interested in the work of an artist like Paul Robeson or a poet like June Jordan or a figure like Marvin Gaye, as providing evidence of change over time, a repository of collective memory, and as a site for understanding these critical turning points in U.S. history.

And just as he studies alternative archives, so does he see the possibility for alternative outcomes, including for the problem of mass incarceration. “The US incarcerates more people than any other country in the world,” but, Camp argues,“ alternative policy outcomes have been and continue to be possible. States around the country could … release [a huge number of] prisoners and reduce budgets for policing and prisons … and reinvest in new democratic institutions that would actually solve the social problems around homelessness, poverty, and inequality in cities.”

Camp points to “the lessons we can learn from social movements seeking an end to police violence, mass incarceration, and broken windows policing. These movements suggest that there could have been an expansion of public expenditure for public education, housing, healthcare, and transportation rather than policing and prisons.”

Indeed, in his forthcoming book, Incarcerating the Crisis: Freedom Struggles and the Rise of the Neoliberal State (University of California Press), Camp traces the roots of the current crisis to the rise of neoliberal capitalism and the withdrawal of funding for key pieces of the social budget.

Camp’s appointment as a postdoctoral fellow at Brown is a joint one between Watson and the Center for the Study of Race and Ethnicity in America (CSREA).

According to CSREA Director Tricia Rose, “The Postdoctoral Fellowship on Race and Inequality Since the 1970s provides two dynamic intellectual locations that support Camp’s disciplinary and interdisciplinary work. At CSREA, we focus on a wide range of scholarship on the issues of race and ethnicity in America. By directing our attention to the issue of race across many disciplines, we find new connections and develop new ideas about how race works. At the same time, the Watson context provides Camp with a robust set of colleagues who have a global emphasis and a set of broader disciplinary concerns.”

The dual appointment makes sense to Camp, a social scientist whose approach is necessarily interdisciplinary. He organizes his work around research problems rather than around a particular discipline because, he says, “no one method or approach can illuminate the full breadth or depth of what we’re looking at. We need different sources of evidence, different methodological techniques to produce the richest knowledge.” He often collaborates with, and presents to historians, political scientists, geographers, and sociologists, as well as scholars in African American studies, Africana studies, American studies, cultural studies, ethnic studies, and urban studies.

Along with interdisciplinarity, activism and social justice remain at the heart of Camp’s scholarship. “I don’t believe in value-free positions,” he says. “I think every scholar ends up taking a position, whether they want to claim it or not. My research is intentionally contributing to scholarly and public debates.”

The year will be a busy one for Camp. This semester he is teaching “Race, Gentrification, and the Policing of Urban Space,” which looks at the relationship between housing and policing policies in the post-1970s period. “Students will develop what I like to call an ‘inventory of concepts’ that are critical for analyzing the pervasive persistence of structural racism in this so-called ‘post-civil rights era,’” he says.

He is also working on several book projects, including one that explores the relationship between structural racism and US war and security policy from the post-World War II period to the post-9/11 era. A volume that he is co-editing (with Christina Heatherton, of Trinity College), titled Policing the Planet: Why the Policing Crisis Led to Black Lives Matter (Verso, forthcoming), examines the origins and development of “broken windows policing,” which has, according to its opponents, led to the criminalization of poor communities of color.

“When you have 60,000 to 100,000 people in LA sleeping on the streets at night, you cannot, as Gary Blasi of the UCLA School of Law puts it, ‘police your way out of homelessness,’” says Camp. “If people don’t have a home, you can keep arresting them but the problem doesn’t go away. So I think there is a tremendous opportunity to discuss the roots of these problems and develop different policy responses to them.”

Despite the high human cost of the unprecedented expansion of policing and prisons over the last four decades, Camp sees reason to hope. “The response to the events in my study were not natural. They were not inevitable.”