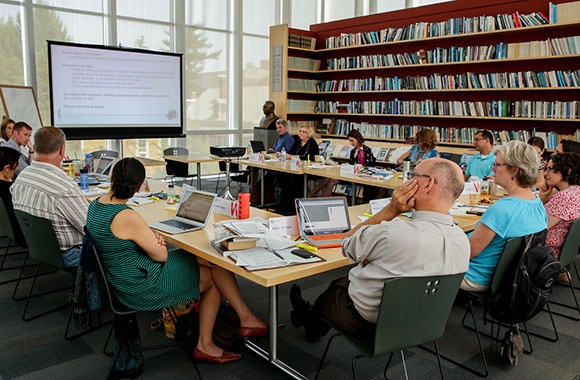 For two weeks in June, the Watson Institute hosted the preparatory workshop for “Irregular Warfare: Experiences across the Civil-Military Divide,” a two-year project funded by the National Endowment for the Humanities.

Part of the NEH’s commitment to “Dialogues on the Experience of War,” the Brown program, co-directed by Watson faculty fellow Keith Brown and comparative literature professor Esther Whitfield, will offer an orientation program in August for incoming student veterans to Providence area colleges and universities, including those coming to Brown. The June program convened local humanities scholars and enthusiasts—some of them veterans or military spouses, others with no previous engagement with military culture—who will lead that program and also plan public outreach programming over the next two years. 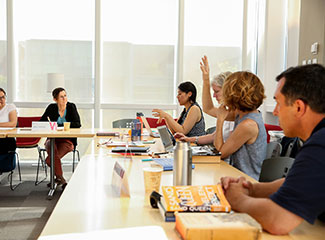 The conflicts—and the texts—were chosen with the goal of prompting conversations that go beyond the most recent wars, in which US forces have been tasked with winning Iraqi hearts and minds while combating an elusive and determined enemy that operates by very different rules than their own. By examining narratives produced in earlier wars in which soldiers faced the same challenges—of enemies hiding among civilians, of junior officers and noncommissioned officers bearing responsibility for the maintenance of morale and professional standards, and of civilians at home questioning their conduct—the group worked to identify common themes, especially in the ways in which authors blended fact and fiction to convey the harsh realities of irregular war and the particular strains it creates for those who wage it. 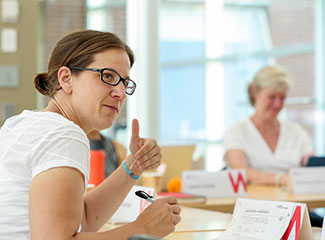 The broader aim of the NEH program is to foster conversation as a means of bridging the gap between the 1 percent of the US population whose family members serve in the military and the other 99 percent. Over two weeks, the June participants—themselves from very different backgrounds—explored the role of the humanities in this enterprise, especially the practice of close, critical reading of sources. The emphasis was on highlighting the differences between both reading and writing styles: those with military experience, for example, explained to their civilian counterparts that incoming veteran students will likely be more skilled at reading to extract information than at reading to analyze rhetorical techniques.

From guest speakers from the Naval War College and Brown, the group also studied best practices for student learning, especially innovative ways to foster broad participation and exchange—through writing exercises, for example, or by offering models that newcomers to college-level humanities can deploy.

By the end of the two weeks, the team had generated a set of core questions to prompt discussion and comparison among the texts and historical periods, as well as a repertoire of reading and writing exercises for the August program. The key themes that will be explored through the works are representations of duty, loyalty, suffering, and empathy.

In addition, the team began to map out a set of public events in which student veterans can continue their own conversations, as well as be in touch with a larger number of Rhode Island veterans and others interested in understanding the shared human experience of war.  Among the events already planned for fall are a visit by author Helen Benedict, whose novel Sand Queen prompted the richest discussion.

Anyone interested in applying for the program can do so here.