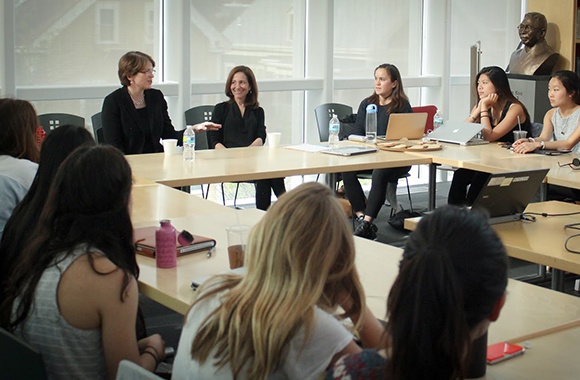 “Every human life has intrinsic value. But for those who think beyond the framework of innate human rights, I could still make the argument that on a practical, economic, and productivity level, it doesn’t make sense to exclude women and girls from the equation.”

Pamela Reeves, a Champion of Women and Girls Around the World

“The goal is global prosperity,” said Pamela Reeves ’87, a Senior Fellow at the Watson Institute. “It’s to lift everybody up. And the truth is we cannot do that if we are willing to leave half the population behind.”

Reeves was talking about the role of women in global development, which is her area of expertise after many years of working in various parts of the world. Currently an advisor to the Office of Melinda Gates on global women’s issues, she formerly ran Secretary of State Hillary Clinton’s International Fund for Women and Girls and also designed the Girl Declaration program as a senior advisor to the Nike Foundation. This semester she is teaching a course at Watson called “Global Women’s Issues: Investing in Women as a Strategy for Sustainable Growth and Global Development.”

She arrived at this calling after many years designing and implementing development assistance around the world. After graduating from Brown with a degree in International Relations, she worked on elections and political processes globally with the Center for Democracy. Her first project was in Noriega’s Panama. “It was really about participatory governance,” she said. “You can call it democracy, but really it was about how every vote counts, that everybody should get a vote, that all votes are counted equally, and that everybody gets a say in how they are being governed.” She saw the important role that women played, both in the political process and as active advocates and leaders in civil society.

While in graduate school in International Relations at Yale, after the fall of the Berlin Wall, she was able to hone her thinking about countries in political transition. “There was space created for women—even if it was a small one, even perhaps temporary. But there was an opening of societies and governance for more robust inclusion.” When she began work as a human rights officer for the United Nations in Liberia, a country deep in civil war, she noticed how the women filled the void in organizing society while most of the men were off fighting. (It was no surprise to her that Ellen Johnson Sirleaf, who had the support of the country’s market women, later became the president of Liberia, the first woman elected president in Africa.) Subsequently Reeves worked for the International Foundation for Election Systems, which took her to such disparate places as Haiti, Equatorial Guinea, Tanzania, and the West Bank and Gaza. As she worked more closely with both governments and civil society, her work naturally began to include women leaders. She found the spectrum of inclusion across countries and issues fascinating, and her career started a pivot that ultimately changed its course.

"There was space created for women—even if it was a small one, even perhaps temporary. But there was an opening of societies and governance for more robust inclusion.”

When Hillary Clinton became Secretary of State, Reeves received a call from Melanne Verveer, the first U.S. Ambassador for Global Women’s Issues. President Obama had just elevated the leadership of the Secretary’s Office of Global Women’s Issues to the ambassadorial level, Reeves said, “because he recognized the importance of including all perspectives in our foreign policy; he saw the strength of harnessing the potential of every human being to fulfill our national security goals, and so he made women and issues of gender a central part of the way we do business in our foreign policy. It was an inspirational moment.” Verveer asked her to run the Secretary’s International Fund for Women and Girls, which was a public/private partnership, meaning that private funds were brought into the State Department to support US government programs created and carried out through partnerships with the private sector and local groups overseas. These funds were meant to be used “wisely to advance or to elevate the perceived status and value of women in every country, to help them unleash their own potential, and to have the opportunity to engage in their own economies, participate in their education and political systems, access public health, and combat and seek protections from all forms of gender-based violence,” Reeves said.

There are countless examples of data, she said, that show how the advancement of women affects a country’s economy in a positive way. When barriers to women’s entry into the labor force are dissolved, GDP grows.  Globally, girls living in poor households are almost twice as likely to marry before 18 than girls in higher income households. One study shows that, across targeted economies, some 5 million women business owners will grow their businesses by at least six employees each by 2017. And women tend to reinvest more of their income in their family and community, she said. A study in Brazil, for example, showed that children of women who had extra income actually grew taller. Both empowerment and access for women in every sector are important, Reeves explained. Empowering a woman—helping her find her voice and agency—ensures that she has a say in how she runs her life. “Access is different,” she said; “access is about changing the system itself, and that’s what I think we need to work a little harder on.”

But how can women gain more access when there are so many deeply ingrained cultural impediments in the way? Reeves believes that things are changing all over the world, in part because legal changes have been accompanied by broad-reaching awareness and training campaigns. Changes in perspectives about FGM (female genital mutilation or cutting) are a good example. Many countries have laws on the books that ban the practice as a human rights violation, but individual communities still carry it out.  Local community-based groups have made a point of helping practitioners understand the negative rights and health consequences of FGM.  In truth, most people have never thought beyond the notion that “we do it because we’ve always done it,” and never considered the human rights implications. “And community after community is voluntarily eliminating the practice,” she said. “It’s like participatory democracy: No one says ‘You have to do it this way,’ but many people are beginning to ask: ‘Have you thought this through?’”

Awareness is also critical on the all-important education front. Reeves said that tremendous progress has been made in providing primary education for girls. Now the focus is on secondary education and even on school-to-work initiatives. “We have a long way to go to change laws and norms in the workplace, in school, and in the home,” she said. Beyond that, specific policies, budgets to support those policies, and a favorable legislative framework are required, she said. “But then you have to make it work on the ground, all of it.” She believes that partnerships are key and has seen great success when the private sector, the government, and civil society work together to solve problems.

“Every human life has intrinsic value,” said Reeves. “But for those who think beyond the framework of innate human rights, I could still make the argument that on a practical, economic, and productivity level, it doesn’t make sense to exclude women and girls from the equation.”