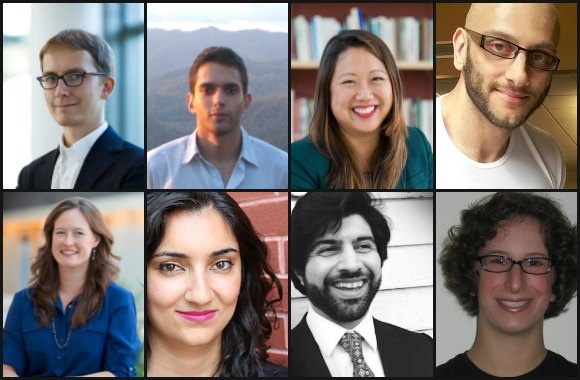 The selection of these eight early career scholars from across the social sciences contributes to one or more of the Institute’s core research areas of security, development, and governance.

Providence, RI - The Watson Institute for International and Public Affairs at Brown University is pleased to announce the newest cohort of Postdoctoral Fellows, arriving for Fall 2016. The selection of these eight early career scholars from across the social sciences contributes to one or more of the Institute’s core research areas of security, development, and governance. Through a regular seminar series, professional development programming, and the opportunity to teach and mentor undergraduates, fellows benefit from and contribute to Watson’s distinctive interdisciplinary environment and commitment to addressing urgent global issues, while pursuing their own scholarly research.

More information on the program can be found at watson.brown.edu/education/postdoc.

Narges Bajoghli is a postdoctoral fellow at the Watson Institute for International and Public Affairs. She holds a PhD in socio-cultural Anthropology from New York University, and earned an MPhil in Anthropology at NYU, an MA in Anthropology at the University of Chicago, and a BA in International Relations from Wellesley College. She conducted 18 months of fieldwork in Iran, and previously worked in NGOs in Iran, Nicaragua, and Cuba. Her research has received funding from the Social Science Research Council, the National Science Foundation (awarded/declined), The Wenner Gren Foundation for Anthropological Research, the American Institute of Iranian Studies, the Torch Fellowship, the NYU Center for Humanities, and the NYU Dean’s Dissertation Fellowship. Bajoghli's dissertation, "Paramilitary Media: Revolution, War, and the Making of the Islamic Republic of Iran," examines the role of pro-regime cultural producers in Iran, focusing on media producers in the paramilitary Basij and Ansar-e Hezbollah organizations, as well as the Islamic Revolutionary Guard Corps.

Jennifer Greenburg is a postdoctoral fellow at the Watson Institute for International and Public Affairs. She holds a PhD in Geography from UC Berkeley. Her research focuses on the US military’s integration of development and humanitarianism into counterinsurgency doctrine in the context of the wars in Iraq and Afghanistan. Jennifer’s dissertation, entitled, “‘We’re an NGO with guns’: Haitian Geographies of US Militarized Development,” combined ethnographic observations of US military trainings with primary archival research in Haiti, a site of continual US intervention whose history is used in present-day military instruction. At Watson, Jennifer is writing a book manuscript drawing on this research, and including new work on the gendered dimensions of military humanitarianism. Her new research focuses on the US military’s establishment of all-female military teams in the years leading up to the recent reversal of policies that technically banned women from direct assignment to ground combat. Jennifer’s research has received funding from the Social Science Research Council and the National Science Foundation. Her publications have appeared in The Journal of Historical Geography and Journal of Haitian Studies.

Michelle Jurkovich is a postdoctoral fellow at the Watson Institute and an Assistant Professor of Political Science at the University of Massachusetts Boston. Her research is motivated by a desire to be both policy-relevant and theoretically driven. Currently, she is working on a book manuscript on international anti-hunger activism as well as several additional projects, including a comparison of activism across different economic and social rights (education, health, and food). She is especially interested in how and why norms develop (or don’t) around economic and social rights and the causes and effects of blame diffusion in advocacy campaigns. She has conducted extensive interviews within the anti-hunger advocacy community as well as archival work on the construction of hunger as a global problem at the UN FAO archives in Rome, the UK National Archives, OXFAM’s organizational archives in Oxford, UK, and the US National Archives. In keeping with her more general curiosity about the (often neglected) role of the Global South in constructing international norms and practices, she published an article with Martha Finnemore titled "Getting a Seat at the Table: The Origins of Universal Participation and Modern Multilateral Conferences," Global Governance, 20, no. 3 (2014): 361-373.

Mohammad Ali Kadivar is a postdoctoral fellow at the Watson Institute for International and Public Affairs, and was formerly a PhD student in the Department of Sociology at the University of North Carolina at Chapel Hill. His work contributes to political and comparative-historical sociology by exploring the interaction between protest movements and democratization. His work asks: When do pro-democracy movements succeed, and when do they fail? And when they succeed, what makes for a lasting, durable success? This work grows out of his experience as a participant-observer of the pro-democracy movement in Iran, but his research agenda moves outward from this case to explore these issues on a global scale, using case studies, comparative-historical methods, and statistical analyses. In his dissertation, he asks whether mass mobilization during political transitions affects the survival of young democracies. He uses statistical analysis of original data that he collected, as well as extended case studies of six new democracies, to investigate both the general relationship between mass mobilization and democratic survival and the underlying causal mechanisms. Kadivar’s research has been published in the American Sociological Review, and Social Forces, and has won awards from the Collective Behavior and Social Movement (CBSM) and Global and Transnational Sociology sections of the American Sociological Association (ASA).

Rahul Mediratta is a postdoctoral fellow at the Watson Institute for International and Public Affairs. He holds a PhD and an MA in Political Science, both from Northwestern University, an MSc in Comparative Social Policy from Oxford University as a Commonwealth Scholar, and a BHS in Health Policy from York University in Canada. Mediratta’s research has received funding support from the Kellogg School of Management, Harry S. Truman Presidential Library and Museum, and the Roberta Buffett Institute for Global Studies. Mediratta’s dissertation, “Globalization in the Shadows: Smuggling and the Foreign Policy Calculus of Enduring Interstate Rivalry,” explores how smuggling in commercial items can force countries with hostile relations to cooperate. Mediratta examines smuggling in the India-Pakistan and China-Taiwan rivalries, and builds an original database on trade barriers and militarized disputes across the 86 cases of enduring rivalry dated from 1816 to 2001. His research involved interviews with smugglers, industry officials, and state officials in India, Pakistan, Dubai, and Taiwan. This dissertation is part of a larger research agenda on grey markets – referring to smuggling in commercial items – and its effects in areas such as security and development.

Yusuf Neggers is a postdoctoral fellow at the Watson Institute for International and Public Affairs. He received a PhD in Public Policy from Harvard University, and also holds an MSc in International Political Economy from the London School of Economics and a BA in Mathematical Economic Analysis from Rice University. His research examines questions at the intersection of development economics and political economy, with a particular focus on the connections between political and bureaucratic accountability and the quality of public services.

Elena Shih received her MA and PhD in Sociology from the University of California, Los Angeles, and BA in Asian Studies and Women’s Studies from Pomona College. She is an Assistant Professor of American Studies and Ethnic Studies at Brown University, where she also serves as the Faculty Fellow directing a human trafficking research cluster through the Center for the Study of Slavery and Justice. Her work focuses on the mobilization of discourses of rights and morality, and the exercise of state and market effects, in contemporary movements against human trafficking. Shih’s commitment to community-based and participatory ethnographic research methods has been recognized by numerous grants and awards including the American Sociological Association's Community Action Research Initiative Spivak Grant, and UCLA Center for the Study of Women Constance Coiner Award for commitment to working-class, feminist issues and social change. She is a former Fulbright Fellow to the Zhongze Women's Legal Counseling and Service Center (formerly Beijing University Center for Women’s Law Studies and Legal Aid), and researcher for the United Nations Inter-Agency Project on Human Trafficking (UNIAP) China Office.

Lucas Stanczyk is a postdoctoral fellow at the Watson Institute for International and Public Affairs for 2016-17. He works on topics at the intersection of political philosophy and political economy. His book manuscript develops a theory of justice in production. His other research and teaching is focused on ethical problems in global energy policy, and the ethics of growing inequality. He is an assistant professor of political science and affiliated faculty of philosophy at MIT. He completed his PhD in Government at Harvard.

Congratulations to our 2016 graduating cohort of postdoctoral fellows who will begin teaching in the fall at schools including Boston College, Rutgers University, Yale University, and Johns Hopkins University.