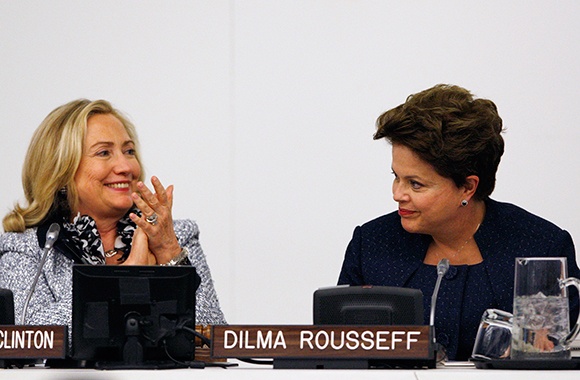 The Fate of Dilma Rousseff and the Future of Hillary Clinton: Anything in Common?

Professor James N. Green on the parallels between Dilma Rousseff and Hillary Clinton

Drawing comparisons or parallels between people, political situations, and different processes is a dangerous endeavor. One runs the risk of creating false analogies and equating events that are quite distinct because of notable historical and contemporary differences. Yet a Brazilian colleague teaching in the United States encouraged me to share my ideas with a wider audience about the impeachment process in Brazil and the current political moment in the United States. It seems timely to do so in the run-up to the U.S. presidential elections and as the center-right consolidates its power in Brazil.

The Brazilian elections that gave Dilma Rousseff her second mandate in office in 2014 were the most polarized since the return to democracy in the late 1980s. Reflective of that fact, her margin of victory of 3.2 percent was the smaller than that of Fernando Collor de Mello’s 6.0 percent win over Luiz Inácio Lula da Silva in 1989 in Brazil’s first democratic presidential election since 1960. Still she won by a hefty 54.5 million votes against her opponent Aécio Neves’s 51 million. (We should keep in mind that Barack Obama defeated Mitt Romney in 2012 with a 3.8 percent margin and 65 million votes to Romney’s 60 million).

The 2014 Brazilian electoral campaign was a rough-and-tumble affair, filled with accusations and counter-accusations about the fate of Brazil under a left-leaning Workers’ Party-led coalition government or under the leadership of the center-right Brazilian Social Democratic Party and its allies. Lula had handpicked President Rousseff in 2010 to be his successor, and he heralded her strengths in her administrative experience, rather than in talents accumulated while rising to prominence as an elected politician. In her first two years in office, she reached a 60 percent approval rating and only slipped in popularity during and after the massive June 2013 mobilizations that questioned government spending priorities and called for better health services, more educational opportunities, and improved public transportation, among other demands. Sensing that the President’s support was waning, the conservative mainstream press and media conglomerates, which had initially opposed the São Paulo-based demonstrations against a bus fare hike, did an about-face and encouraged nationwide protests. Nonetheless, Rousseff won the 2014 elections. Immediately, her opponents charged electoral fraud and questioned the legitimacy of the outcome.