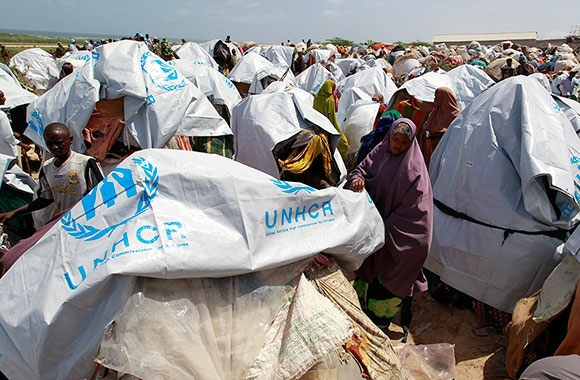 "How many hundreds of thousands of children have to die before humanitarian norms trump anti-terrorism norms?"

“How many hundreds of thousands of children have to die,” asked Sam Worthington, speaking yesterday at the Watson Institute’s annual global conference, Brown International Advanced Research Institutes (BIARI), “before humanitarian norms trump anti-terrorism norms?” When international relief agencies anticipated the famine in Somalia a few years before it happened and pressed the United Nations to act proactively, those agencies were barred from helping local agencies, because anti-terrorism laws criminalized diverting any resources to terrorist groups. After successfully persuading a half-dozen U.S. federal agencies to waive those laws, tons of food were eventually delivered to Somalia, but more than 200,000 Somalis died in the interim of several months.

“Sam Worthington is uniquely poised to discuss some of the most significant issues in humanitarian response worldwide,” said Dr. Adam Levine, director, Global Emergency Medicine Fellowship at The Warren Alpert Medical School. Worthington, chief executive officer of InterAction, the nation’s largest alliance of international nongovernmental organizations (NGOs) targeting humanitarian relief efforts, reminded scholars that some 80 percent of disasters are handled locally. “The vast majority of crises come down to: Can my neighbor help me and how can I help my neighbor,” he said.

A member of the Council on Foreign Relations, Worthington also represents the NGO community on the 18-member United Nations InterAgency Standing Committee, the official body coordinating all humanitarian responses worldwide. International relief efforts are “overwhelmed,” he said. “There’s a four-fold increase in the number of individuals affected by crises… we are not coping as nation-states and human beings because of climate change, war, collapse of nation-states. [International relief efforts] help save tens of millions of lives, but the number of people not being helped is growing.” Getting access and bringing supplies to certain war-torn areas, such as parts of Syria, is hugely problematic.

Whenever we have discussions about change, most people want the “other” to change and not themselves, said Worthington, who identified the convergence of humanitarian and development efforts as a positive change. There’s a legitimate tension in that convergence, however; long-term development requires state involvement, yet humanitarian relief organizations, which wish to remain independent, impartial, and neutral, often have good cause to mistrust the state that has no regard for its citizens.

Worthington has a deep understanding of those challenges – from the strains on the humanitarian system caused by the greatest number of refugees and displaced persons since World War II to issues of coordination and accountability within the humanitarian community itself – said Levine, one of three conveners of BIARI’s Humanitarian Response and Post Conflict Reconstruction institute.

Given BIARI participants’ backgrounds – from UN agencies, NGOs, local governments, and academic institutions, most notably from the Global South – it’s especially meaningful for them to learn more about humanitarianism from Worthington, a global leader in the field, said Levine. “It’s equally important that Worthington hear about the issues affecting [local] humanitarian response and humanitarian responders …in countries around the world from the front-line providers themselves who are participating in our Institute. We expect this two-way dialogue will go far beyond [merely] educating participants, and actually has the potential to impact and improve humanitarian policy-making.”

“It’s false to talk about “a [humanitarian relief] system; it’s multiple systems,” explained Worthington. The United Nations is not nimble enough and doesn’t interface well with local agencies, and large international NGOs, such as Save the Children, interface with smaller NGOs that operate with local actors who represent more than 90 percent of the world’s humanitarian infrastructure. The challenge, however, is that the cohort of qualified local people is often exhausted in a crisis; if it’s not, there’s something wrong with the local response to the emergency, said Worthington.