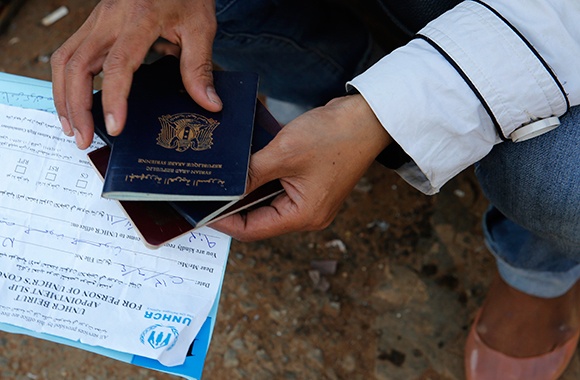 "A misplaced envelope, a missing barcode, or a cigarette carelessly dropped in the room could mean irretrievable loss for those that have suffered so much already."

The Daily Uncertainty of Being a Syrian Refugee

The treatment of Syrian refugees at the Jordanian border has received much attention. On one hand, Jordan has been criticized for being overly strict about entry into the country, and on the other, praised for letting in as many as one million refugees. While security forces are concerned about ISIS or Assad-loyal infiltrators coming into the country, many are sympathetic to the long, arduous journeys that families have taken just to ensure their survival.

Until recently, when they arrived at the border to Jordan, the Syrian refugees were picked up by the Jordanian army and transported with the help of NGOs to a processing center called Rabaa Al-Sarhan. The center provided food, medical services, and safe shelter for refugees as they transitioned into one of the large refugee camps or outside the camps in an urban area with friends or family. At its peak, the center was processing 3,000 refugees per day. Nights were busier, as many refugees felt their transit across the desert was safer in the cover of darkness. 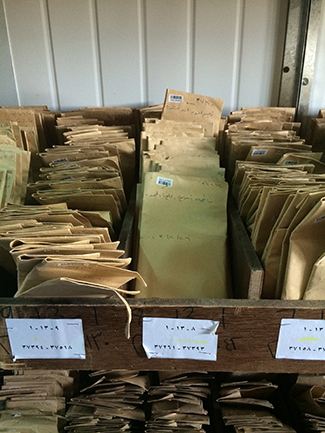 In the processing center, refugees registered their names and families and sought emergency assistance. They turned over what documents they had with them: passports, national identity cards, school IDs, professional certifications, and anything else that might establish a family's legal status as both "Syrian" and  refugee.

These images display envelope after envelope. Each one carries a family's documents. The bar code sticker correlates with the United Nations High Commissioner for Refugees (UNHCR) record assigned to each family, and this numbering system is the only way these manilla envelopes, stapled closed, are organized. The encounter struck me as a small window into the precarity felt and lived by Syrian refugees. The legal establishment of their past in Syria is here; the verification of their present status in Jordan as Syrian refugees is here; and their futures depend on the documents' safekeeping. A misplaced envelope, a missing barcode, or a cigarette carelessly dropped in the room could mean irretrievable loss for those that have suffered so much already.

In 2015, UNHCR transitioned from the paper system to an electronic system that stood at the apex of technological advances in refugee management: laminated ID cards, iris-scans, fingerprinting verification, and pre-charged debit cards that could be used both within and outside the camps. These advances, NGOS and the UNHCR claimed, helped guarantee protections against fraud and abuse. They removed the vulnerability from a dry unit of documents, and enabled refugees to both keep their own documents and manage their own aid and development in technologically reliant ways.

Most praised this transition and the ways it reduced refugee precarities. But some raise eyebrows at the influx of biodata now in the hands of the Jordanian government, and presumably other host countries' governments. As one refugee said to me, "Are we not still vulnerable? They know my irises, my fingerprints, and see what I purchase with my aid money. I was anonymous, but now they know everything."