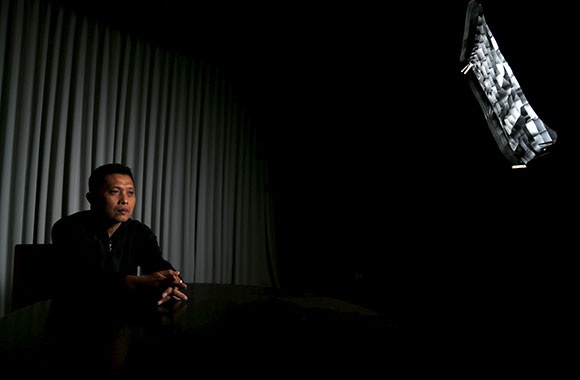 Adi Rukun, whose brother Ramli Rukun was killed during the violence described in the documentary "The Look of Silence".

Two stunning films that use highly original techniques to explore the modern history of Indonesia will be shown this Thursday, Nov. 10, followed by a teach-in on Friday about Indonesia’s modern history. We asked Stephen Kinzer, Watson Institute senior fellow, author, and award-winning foreign correspondent, why these films on mass murders in the 1960s continue to resonate with students today?

"Both films, "The Act of Killing" and "The Look of Silence," were nominated for Academy Awards. They deal with a largely unknown episode, the murderous rampage of 1965 in which government-sponsored death squads killed hundreds of thousands of Indonesians suspected of being pro-Communist. For decades the US-backed government denied the killing ever happened. These two films represent a radical break with the official narrative, and expose a long-hidden truth to the world.

Just as extraordinary is the style in which these films were made. The director, Joshua Oppenheimer, winner of a MacArthur "genius" award, spent years winning the trust of several death squad leaders. He persuaded them not only to confess their crimes, but to re-enact them on camera. These dazzlingly original films illuminate both history and the possibilities of film-making.

“The Act of Killing” is probably the only transvestite musical documentary about genocide ever made. In the companion film, “The Look of Silence,” a young optometrist whose brother was among the victims in 1965 tracks down the killers. The reaction of the perpetrators, who defend the necessity of mass murder but are haunted by their deeds, offers a rare glimpse into the human soul.

Joshua Oppenheimer, the director, will be present and will attend a catered reception that will be held between the two screenings. On Nov. 11, he will join a teach-in on Indonesia at the Watson Institute. The teach-in will cover the US role in fomenting civil war in Indonesia during the 1950s, the killings of 1965, and the long effort to bring the truth to light.

These events offer a fascinating opportunity to focus on politics and life in a country that has 250 million people and the world’s largest Muslim population, but is little studied or understood in the United States.

“The Act of Killing” will be screened at 2 PM Thursday, at Martinos Auditorium, Granoff Center, 154 Angell St. After a break and reception, “The Look of Silence” will be screened at 5:30 PM. Friday’s teach-in will be at 2 PM in the Kim Koo Library at the Watson Institute, 111 Thayer Street.