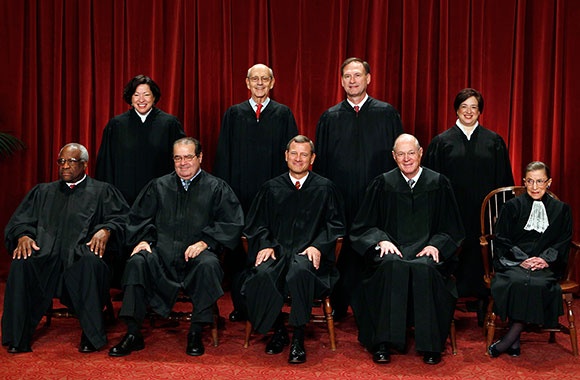 "Election year nominations to the Supreme Court are extremely rare. There are no examples of the Senate refusing to confirm such a nomination."

Partisanship and the Supreme Court

Politicization of the Supreme Court may be reaching a new high water mark.

Never before have we seen the Senate’s majority, speaking through its leadership, challenge the president’s Constitutional responsibility to fill vacancies on the Supreme Court. It hardly seems to fall within the Senate’s role of advice and consent to prejudge and oppose a still unnamed nominee.

Within minutes of the news of Antonin Scalia’s death reaching Washington, Majority Leader Mitch McConnell declared, “The American people‎ should have a voice in the selection of their next Supreme Court Justice… Therefore, this vacancy should not be filled until we have a new President.”

This assertion rests on shaky ground. Sen. Grassley is apparently referring to President Franklin Roosevelt’s nomination of Justice Frank Murphy as the last time a justice was “nominated and confirmed” during a presidential election year. The Senate did confirm current Justice Anthony Kennedy, appointed by President Ronald Reagan, in 1988 (although he was nominated in 1987).

The battle over the nomination of Scalia’s successor will not only impact the on-going presidential election, as it already has, but also the battle for control of the Senate, particularly if Republicans are successful in delaying the process until January.

Grassley relies on his careful use of the phrase “nominated and confirmed” to create the 80 year span. But, the claim that this constitutes “standard practice” is an effort to create a precedent where none exists.

Election year nominations to the Supreme Court are extremely rare. There are no examples of the Senate refusing to confirm such a nomination. Some may point to the 1968 rejection of President Lyndon Johnson’s nomination of Abe Fortas, already on the Court, to become Chief Justice. That nomination was, however, defeated by a bipartisan filibuster principally on ethical questions.

As if to underline the partisan nature of the blanket rejection of any Obama nominee, all six of the Republican presidential candidates have taken that position. Senator Ted Cruz (R-TX) promised to lead a filibuster in the Senate. He asserted on ABC’s This Week with George Stephanopoulos, ““The Senate’s duty is to advise and consent… We’re advising that a lame-duck president in an election year is not going to be able to tip the balance of the Supreme Court.”

This not only twists the meaning of “advise and consent,” but seeks to expand the normal definition of a “lame-duck president.” A lame-duck president is one serving out his term after his successor has been elected.

The battle over the nomination of Scalia’s successor will not only impact the on-going presidential election, as it already has, but also the battle for control of the Senate, particularly if Republicans are successful in delaying the process until January. Under those circumstances, control of the Senate and the Judiciary Committee will be crucial to the next president.

It has become the case that justices are assumed to reflect the politics of the president who appointed them. A Pew Research Institute poll conducted last July found that 70% of Americans believe the justices “are often influenced by their own political views.”

This focus on partisanship, especially given the many major cases decided by a 5-4 majority, appears to have led to a higher percentage of Americans disapproving of the Court than ever before.

Impact on the Future

Those 5-4 decisions are apparently on the mind of conservative Republicans. The fear is that a third Obama justice would tip the balance on many issues in the liberal direction.

Liberals hope and believe a justice appointed by Obama or a new Democratic president will shift the balance on the Court and lead to more liberal decisions. Conversely, Republicans expect a new GOP president to strengthen the conservative majority.

There is an impact, however, which grows out of delay in filling the ninth seat. There are a number of major cases this session, many of which were expected to draw 5-4 decisions with Justice Scalia in the majority.

If the Court is now deadlocked at 4-4, the decisions of the lower courts will stand. Depending on who those decisions favored, this could be a welcome development for one side or the other.

For example, in U.S. v. Texas, the Fifth Circuit decision would stand halting Obama’s executive action affecting 5 million undocumented immigrants. This would distress most Democrats and assure that the question is not resolved until the president has left office.

On the other hand, in Friedrichs v. California Teachers, the Ninth Circuit ruled against a challenge of the right of the teachers union to collect collective bargaining fees. If the Court is 4-4, the lower court decision would stand. This would be a major victory for the unions and please most Democrats.

There are a number of other cases hanging in the balance. The Court, again by a 5-4 margin, blocked the Obama effort to regulate coal-fired power plants pending a decision in the DC Circuit. How that matter plays out is uncertain and will likely not be resolved while Obama is still in office.

The GOP is more likely than not to be successful in keeping the seat open until January. Whichever party wins the presidency, will likely elect a narrow majority in the Senate.

This could well focus renewed attention on the filibuster rules. There would be an increased possibility of a filibuster by the minority. Democrats aggrieved by the perceived stealing of the nomination from Obama would view any new Republican president’s pick with a jaundiced eye. On the other hand, if a Democrat wins, the GOP is no more likely to see his/her choice as any more acceptable than Obama’s. Would Sen. Cruz, for example, see the 2nd amendment as any less endangered?

A president faced with such a filibuster must find 60 votes in the Senate to end the debate. But, there’s a wrinkle.

In 2013, the Democrats used a controversial parliamentary ploy to change how the filibuster is interpreted. This change means that judges can be confirmed with just majority support. The Democrats exempted the Supreme Court from that change. However, should a minority block the Supreme Court nominee of a president of the other party, the precedent- the so-called “nuclear option”- would be again used to allow the majority to overcome the filibuster.

The danger is, particularly in this partisan battle, the result would be an even more politicized Court. Unlike in the past, the president would not be constrained by the threat of a filibuster. Past presidents understood the need to take into account the 60 votes required when selecting the nominee. They must convince at least part of the minority, of the nominee’s mainstream legal credentials. If the filibuster is squashed, so is that restraint.