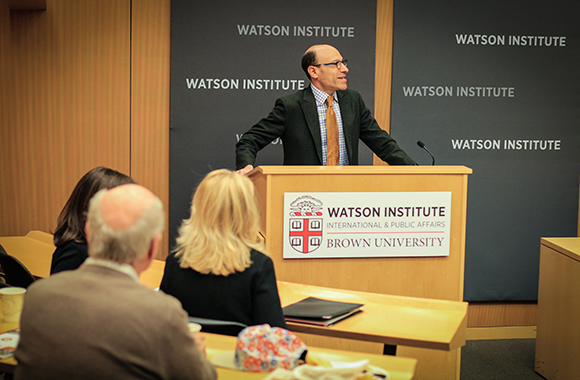 The World, Explained: Notable Lectures from the Spring 2016 Semester

From a European Parliament member and United States ambassadors to the world’s leading professionals and scholars researching health crises and America’s wars, this semester’s lecturers provided a wealth of knowledge while addressing some of the world's most pressing issues. Whether you missed them the first time or want to revisit them now, take a moment to watch some of our most notable events from the Spring 2016 semester.

Hans-Olaf Henkel ─ Does Europe Still Need (or Want) a United States of Europe?
Hans-Olaf Henkel, a member of the European Parliament, pleads for abandoning the policy of advancing the European Union (EU) towards a Political Union and for returning to a EU with a Common Market to be completed on the basis of a Europe of Sovereign Nations. Henkel describes why only such a policy can keep Britain within the EU. He advocates the closing of ranks with the U.S. on the basis of the Transatlantic Trade and Investment Partnership (TTIP).

Congressman Elijah Cummings ─ The Fierce Urgency of Now
Congressman Elijah Cummings of Maryland, the Democratic ranking member of the House Oversight and Government Reform and Benghazi Committees, spoke about the critical importance of a strong and sustained multiracial coalition in solving the most pressing domestic challenges confronting our nation. Drawing upon his own life experience growing up in segregated Baltimore during the 1950s and1960s, Cummings offered insights into how policymakers can best understand some of the most vexing challenges dominating American politics today -- from addressing income inequality to overcoming racial disparities.

Timothy Snyder ─ Ukraine and Russia in a Fracturing Europe
Timothy Snyder is the Bird White Housum Professor of History at Yale University, specializing in the history of central and eastern Europe. He received his B.A. from Brown University and his doctorate from the University of Oxford, where he was a British Marshall scholar at Balliol College. In his lecture, Snyder looks beyond the status quo and asks not only what it looks like when it falls apart, but also inquires about the fracturing agent. Is there something making things fall apart in Europe? What are the forces at work? Do the predicaments in Russia and Ukraine have similarities?

Chas Freeman ─ The Crumbling of the Pax Americana
America prevailed over the Soviet Union in the Cold War. Its armed forces are more competent and lethal than those of any adversary or conceivable combination of adversaries. The American economy remains, by most measures, the world’s largest. Yet Chas Freeman, former U.S. Ambassador to Saudi Arabia, argues that the ability of the United States to shape the international, political, and economic environment is visibly declining. What are the prospects for reestablishing an American role in world affairs commensurate with the matchless heritage of global leadership and the extraordinary natural endowment of the United States?

This lecture is the first of a three part series delivered by Chas Freeman.

Rachel Harding – Mysticism and Mothering in Black Women's Social Justice Activism: Brazil/USA
Rachel Harding is Assistant Professor of Indigenous Spiritual Traditions at the University of Colorado, Denver. This presentation examines the interstices of mysticism, mothering/hospitality and community organizing in the lives of women of African descent in Brazil and the United States – a confluence about which there is little extant scholarship. Using an analytical framework that incorporates history of religions of the Afro-Atlantic diaspora, ethnographic and historical studies of contemporary social justice movements, oral histories, and womanist ethics, my work explores the moral and mystic universe of contemporary Afro-Brazilian and African American women activists.

Salman Khurshid – India's Muslims Since Independence
Salman Khurshid is an Indian politician, lawyer, and writer. As part of the Brown India Initiative's OP Jindal Distinguished Lecture Series, Khurshid looks at the passage of India's Muslims from the time of independence to present day, while also acknowledging the relationship of Muslims to the entire world. Khurshid examines the advances and challenges of India democracy in the context of students and others protesting for racial, ethnic, and religious inclusion in contemporary India.

Zika Virus: Separating Fact from Fiction
The goal of this panel discussion was to separate “fact from fiction” about the Zika virus, especially as the public fear level rises in tandem with increasing media coverage. The discussion centered around the epidemiology of the Zika virus as well as the kinds of public health policy responses that are appropriate based on what we know about Zika from medical science and public health research. For example, does it make sense in terms of medical science to advise women not to get pregnant until 2018, as the government of El Salvador has stated?

Andrew Bacevich ─ America's War for the Greater Middle East: A Military History
From the end of World War II until 1980, virtually no American soldiers were killed in action while serving in the Greater Middle East. Since 1990, virtually no American soldiers have been killed in action anywhere else. What caused this shift? Andrew Bacevich, one of the country’s most respected voices on foreign affairs, offers an incisive critical history of this ongoing military enterprise—now more than thirty years old and with no end in sight.

Brains in Crisis: Stress and Resilience in Syrian Refugee Children
The 4th annual Engaged Scholarship Workshop focused on the current Syrian refugee crisis, and in particular its impact on brain development and mental health outcomes in young children. Our Brown-based team of interdisciplinary scholars connects scientists with anthropologists and historians, cognizant that understanding the cultural and historic context of the Middle East is paramount to any intervention success.

Ambassador Cathy Russell ─ Why Empowering Women and Girls is Good for U.S. Foreign Policy
Watson Institute Senior Fellow Pamela Reeves hosts a conversation with Ambassador Catherine Russell who currently serves as the U.S. Ambassador-at-Large for Global Women’s Issues, on the importance of empowering women politically, socially, and economically around the world.