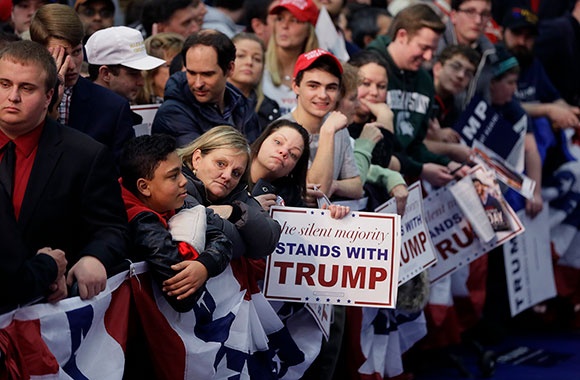 In the aftermath of the 2016 election, the Taubman Center for American Politics and Policy at Brown University’s Watson Institute determined to take a deep dive into the nuances distinguishing various corners of “red” and “blue” America. In what ways are certain communities caught in “bubbles” that distinguish them from the rest of the country? Which threads tie disparate demographic groups together? To answer those questions, the Taubman Poll identified five separate communities—each representative of one of the fifteen categories established in the American Communities Project—and partnered with Red America Blue America (RABA) Polling to take public opinion snapshots of how voters in each locale viewed important issues.

The counties studied in the Taubman Poll are generally representative of certain types of counties—meaning that they have demographic and ideological similarities to other counties around the country. For example, Kent County, Rhode Island is what might be termed a “Working Class Suburb” similar to Macomb County, Michigan, Stark County, Ohio, or Luzerne County, Pennsylvania. Like Kent County, each of these counties switched from the Democratic column in 2012 (Obama) to the Republican column in 2016 (Trump). Studying one county in each category can enhance our understanding of similar counties across the country.

Brown’s Taubman Poll chose to focus their research on the following five communities:

The Working Class Suburb (RI) and the Diverse Rural Southern Sample (NC/SC) each voted for Barack Obama in 2012 and for President Trump in 2016. In those counties, support for the President declined between April and June:

2. CONGRESS: Confidence in Congress to act in the country’s best interests is low everywhere, and support for Democrats is gaining relative steam in four of our five locales.

3. RUSSIA: Voters’ view of whether the President “has ties to Russia that threaten America’s interests” shows some movement in the places that switched parties from 2012 to 2016.

The question of whether Trump “has ties to Russia that threaten America’s interests” has had little effect in places that are reliably Democratic or reliably Republican. But in places that switched from Obama to Trump or from Romney to Clinton, the Russia narrative appears to have gained credibility over the last two months.

4. HEALTHCARE/ACA/OBAMACARE: Most Americans share the view that the United States had a moral responsibility to provide healthcare to everyone—but labeling the Affordable Care Act “Obamacare” has a profound effect on whether they support repeal.

A strong majority of Americans everywhere believe that “the nation has a moral responsibility to provide healthcare to all Americans.” But there is less consensus about how that health case should be provided. Voters are increasingly opposed to proposals to repeal the Affordable Care Act. Moreover, they are powerfully influenced by whether the existing health care law is called “Obamacare.”

5. EDUCATION AND CLIMATE CHANGE: Voters across different categories of community reveal some common ground on a series of issues that are often considered divisive within the electorate.

The complete poll can be viewed on the Taubman Center website. Media inquiries can be directed to Kathryn_Dunkelman@brown.edu.