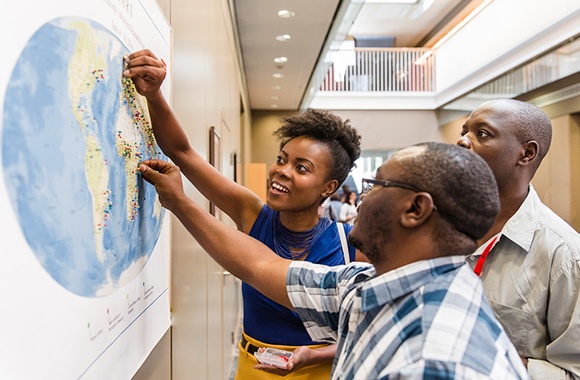 “Through BIARI, we’re bringing accomplished and thoughtful people from around the world to speak to the most pressing issues of the day...”

While English is the official language of Brown University International Advanced Research Institute (BIARI), conversations in Arabic, Farsi, and Portuguese ricochet through the halls of the Watson Institute for International and Public Affairs, where BIARI is based.

BIARI’s accomplished participants, who share their expertise, passion, and diverse backgrounds with one another and BIARI faculty, apply themselves to BIARI’s robust, creative, and multidisciplinary programs probing some of the world’s most complex dilemmas. Sophisticated learning and deep connections – at BIARI and beyond – ensue and reinforce Watson’s mission: to promote a just and peaceful world through research, teaching, and public engagement, said Matthew Gutmann, BIARI director and professor of anthropology.

From some 1,000 deserving applicants, 110 accomplished young faculty and professionals were selected for BIARI 2017, which receives support from Santander Universities and Brown. Twelve participants hail from India, eight from Brazil, six from Colombia and three from Iran, said Laura Sadovnikoff, BIARI assistant program director. Albania, Burkina Faso, Djibouti, Jordan, Palestine and the South Sudan are among the 46 countries represented at BIARI 2017, the ninth held on campus.

New this year is a very exciting BIARI Institute, Forced Population Displacements. “Given what’s going on in the world and the furious debates about borders, migrants, displacement and refugees, this could not be a more topical and meaningful topic,” Gutmann said.

“Given what’s going on in the world and the furious debates about borders, migrants, displacement and refugees, this could not be a more topical and meaningful topic.”

“Through BIARI, we’re bringing accomplished and thoughtful people from around the world to speak to the most pressing issues of the day like population displacements, climate change, humanitarian relief efforts and global economic inequality.” Beshara Doumani, director of Middle East Studies and Joukowsky Family Distinguished Professor of Modern Middle East History, and Associate Professor of Africana Studies Keisha-Khan Perry, an anthropologist studying Brazilian and Caribbean race, migration and displacement, will lead this institute.

Other highly accomplished Brown faculty share their unique expertise with BIARI, said Gutmann. Glenn Loury, Merton P. Stoltz Professor of the Social Sciences and professor of economics, and Ashutosh Varshey, Sol Goldman Professor of Political Science and International and Public Affairs, and director of the Center for Contemporary South Asia, will again co-lead the ethnicity, conflict and inequality institute.

“We are so pleased that all the BIARI participants will gather at several venues during the June 5-16 program, including for a talk by Professor Loury, at 5:30 p.m., on June 8, and a keynote presentation by Pratap Mehta, President and Chief Executive of the Centre for Policy Research, a prestigious Indian think tank. Mehta, soon to depart CPR to serve as Ashoka University’s Vice Chancellor, will speak at 5:30 p.m., on June 13,” said Sadovnikoff.