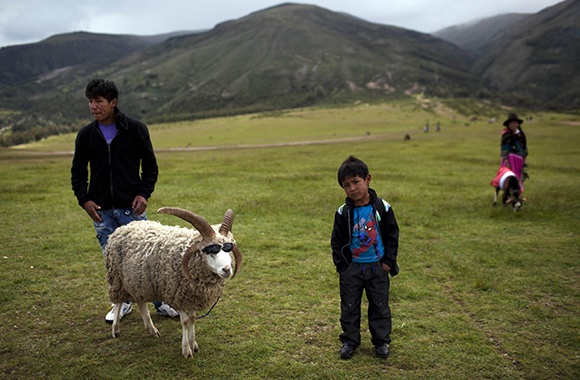 “This is such a living topic, and it’s not one that is going away.”

Jessaca Leinaweaver, a professor of anthropology and director of CLACS

Exploring the “what, how, and who” of race and indigeneity in the Americas.

The Sawyer Seminar began on September 7 with an art exhibit and music showcase, and will continue on September 26 with a talk by postdoctoral fellow Daina Sanchez entitled, "The Children of Solaga: Ritual, Identity, and Transnationalism Among the Children of Indigenous Mexican." The Center also recently published a call for papers for a graduate student symposium entitled "Thinking Decolonization Hemispherically" to be held on December 3.

More information on the seminar series

Brown University has received a $225,000 award from The Andrew W. Mellon Foundation to support a Sawyer Seminar on the Comparative Study of Cultures organized by the Center for Latin American and Caribbean Studies, or CLACS. The initiative, titled “Race and Indigeneity in the Americas,” will take place over the 2018-2019 academic year.

The goal of the initiative is to radically shift how we think about racialization—the ascribing of ethnic or racial identities—in North and South America by examining it through an interdisciplinary, comparative lens.

According to organizer Jessaca Leinaweaver, a professor of anthropology and director of CLACS, the first step toward shifting the paradigm is identifying the assumptions that underlie it—that is, “reading the scholarship backwards” to better understand the cultural and historical context in which it was written. What filters, for example, colored the vision Spanish Christians formed about Inca life and history?

To accomplish this, three day-long workshops will be held over the course of the year, each one framed as a set of questions that scholars from across the social sciences and humanities will ask: What are the questions we’re asking? How do we ask them? Who answers these questions, and who listens to the answers?

Eight monthly seminars, each held at a different Brown center or institute, will complement the more theoretical work accomplished in the workshops. Arts and cultural events are also planned to expand the impact of the ongoing findings and engage the community beyond Brown.

A steering committee will be convened in early 2017-18 to recommend participants from a range of nations, backgrounds, and disciplines. Leinaweaver is especially excited about the interdisciplinarity both of the scholars she hopes to involve and of the relevant centers across campus as well, which include the John Carter Brown Library, the Center for the Study of Race and Ethnicity in the Americas, and the new Native American and Indigenous Studies Initiative. The breadth “means that we’ll learn from each other: How do you, as a historian, answer this question? How might you as an anthropologist or political scientist answer that question?” Learning from experts in other fields can also help to point out gaps in one’s own, she says.

According to Edward S. Steinfeld, director of the Watson Institute “The ‘Race and Indigeneity’ series exemplifies the core of our mission at the Watson Institute — to shed new light on the most urgent issues of our time through radically innovative, broadly open-minded, and intrinsically multidisciplinary collaboration. Through the generous and richly deserved support of the Mellon Foundation, Jessa Leinaweaver and CLACS are offering all of us at Watson a model for how engaged scholarship should be carried out.”

In his letter of support for “Race and Indigeneity in the Americas,” Provost Richard M. Locke praises the broad reach of the initiative as well as its timeliness, noting also that Brown is in the process of implementing a diversity and inclusion action plan.

But there is also a far-reaching urgency to this topic. The approach is hemispheric, Leinaweaver says, because from Canada to Argentina, countries have grappled with similar histories of colonialism, extraction, and exploitation—and still are. Think Black Lives Matter. Think #NoDAPL. Think Muslim ban. Only days ago, the university reached an agreement with the Pokanoket Nation about disputed land in Bristol.

“This is such a living topic,” she says, “and it’s not one that is going away.”