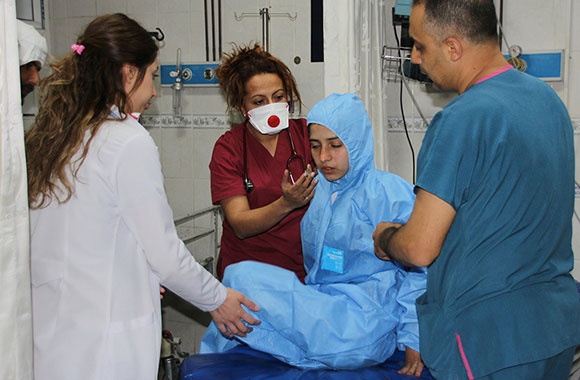 "My sincere hope is that we do not lose sight of this story once it has run through our news cycle. But one thing I have learned from studying the aftermaths of wars is that once the journalists are gone our attentions are focused on another crisis and we forget the survivors. Yet the effects of war are long lasting."

Three Points to Remember in Response to Chemical Attacks in Syria

The images from the chemical attacks in Idlib Province, Syria yesterday are heart wrenching. Unfortunately, these pictures of children lying motionless, others struggling to breath, and others with burns and blisters all over their bodies is not new, and that is the tragedy of it all. After four years of doing research on survivors of chemical weapons in Iran and northern Iraq and making a short documentary about the plight of some survivors, I had to put this project aside at the time, because I just could not stomach it anymore. Poring over thousands of photos just like the ones flooding our newsfeed yesterday for years made me cynical about humanity. And, on top of that, the fact that no one seemed to remember (or care) that these atrocities had occurred added a level of frustration that was unbearable. As I see these pictures from Syria, it reminds me of three things I learned and that I hope we can keep in mind as we get more information on the most recent attack:

1. Yesterday was just the beginning for these survivors. The headlines from this attack will eventually disappear from our front pages, but the survivors have to live with the consequences of these chemicals and the damage to their bodies for the rest of their lives. They will need countless surgeries on their burned skin as well as on their eyes, which will eventually lose sight depending on how far they were from the explosions, and they will be plagued with a lifelong inability to breath without pain. They will develop a chronic cough and eventually, after about 20 years, many of their lungs will collapse. Some may develop complicated cancers. As an international community, if past trends repeat themselves, unfortunately we will stop caring after the news cycle is over. But know that yesterday was just the beginning for those who survived the chemical attacks.

2. These bombs did not come from nowhere. There is a not-so-illicit weapons trade of chemical agents from companies and countries that we all reside in. No one’s hands are clean in this ordeal. And these weapons will be used again, whether in Syria or elsewhere, simply because they continue to be produced. There are massive amounts of money in this horrendous game, and as long as profit is to be made, these weapons will be used, whether we see the pictures of the horrors they unleash or not.

3. One of the major difficulties that doctors all over the world have in treating survivors of chemical weapons is that they do not know the exact makeup of the chemical agents being used. The companies that produce them do not release exact ingredients due to fears that their “intellectual property” will be stolen. Let that one sink in. These companies hinder proper treatment because of intellectual property concerns over the makeup of their deadly weapons.

My sincere hope is that we do not lose sight of this story once it has run through our news cycle. But one thing I have learned from studying the aftermaths of wars is that once the journalists are gone our attentions are focused on another crisis and we forget the survivors. Yet the effects of war are long lasting. That those of us who have worked with chemical weapons survivors in Iran and Iraq have been able to do so more than three decades after initial exposure (and have had our hands completely full because of the sheer number of survivors, estimated at 100,000 in Iran, and countless more in Iraq, taking into account those exposed to depleted uranium from the first Persian Gulf War and the 2003 U.S. invasion of the country) should point to the fact that although the public forgets, survivors have to deal with this for the rest of their lives. And the next generations are also affected because these chemicals seep into the environment, contaminating water and soil.

May the survivors have patience as they begin to deal with the atrocity of yesterday. And may we not forget, like we have in the not-so-distant past.

Narges Bajoghli is a postdoctoral research associate at the Watson Institute. Her first book (forthcoming, 2018), is on paramilitary media in Iran, and her second book project is about chemical warfare survivors in the Middle East. She will convene an Engaged Scholarship Conference on this theme at the Watson Institute in November 2017, attended by international experts who work on chemical warfare across Syria, Iraq, and Iran.

Listen to a Trending Globally podcast with Narges, "Learning to Play by Ear in Tehran"