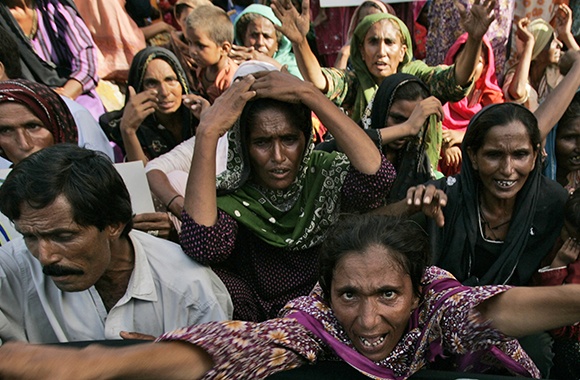 "Democracy is 'not just about electing representatives. It’s also about holding them accountable, upholding the constitution, enforcing basic rights, and having this thick infrastructure of groups that whistle-blow, denounce abuses, and so on.'"

Can the Center Hold?

Examining the Risks to Civil Society in the Global South

Americans are right to be deeply concerned about the Trump administration’s moves to erode civil rights and civil society. But, says sociologist Patrick Heller, in the Global South, things are much worse.

Take Egypt. The aftermath of the so-called January 25 Revolution, the 2011 movement that spread across North Africa and became the Arab Spring, has been nothing less than an assault on civil rights: tens of thousands imprisoned, hundreds sentenced to death.  Last May, President el-Sisi – “as brutal a dictator as Egypt has ever had,” says Heller – signed a law restricting non-governmental organizations to developmental and social work, effectively eliminating civil society in that country.

Then there’s India, where Prime Minister Narendra Modi’s government has also restricted foreign funding of NGOs, accusing them of serving the interests of western governments and stalling development. “The BJP [Bharatiya Janata Party] has been incredibly hostile to civil society,” Heller says. “They went after Amnesty International, Greenpeace, and the Ford Foundation, not to mention many Indian civil rights organizations.”

And the list goes on: South Africa, Mexico, Brazil. Turkey. In all of these countries, governments are drifting away from democratic principles that threaten their control and resorting to repressive policies that  undermine human rights and starve civil society. This matters, Heller says, because democracy is “not just about electing representatives. It’s also about holding them accountable, upholding the constitution, enforcing basic rights, and having this thick infrastructure of groups that whistle-blow, denounce abuses, and so on.”

As Kenneth Roth, director of Human Rights Watch (and a Watson Institute board member) wrote in Foreign Policy last year, “If the world allows [the civil society choke-out] to succeed, it will leave empty shells of democracy — even when periodic elections are held, people will lack one of the principal tools to make their concerns heard.”

To address this crackdown on civil society, the Watson Institute and Dejusticia, a Colombia-based research and advocacy organization dedicated to the promotion of social justice and human rights in the Global South, have organized a two-day conference titled Civil Society and Human Rights in Peril: Threats and Responses Across the World.

This Friday, the conference will bring together a panel of leading academics and activists from around the world, including Indian activist Harsh Mander, Watson Senior Fellow Peter Evans, and César Rodríguez-Garavito, executive director of Dejusticia, to explore effective responses to threats against civil society, particularly human rights organizations. During a closed workshop on Saturday, participants will review written submissions for a future publication, in both English and Spanish, that will address the crackdown, as well as responses to specific challenges it poses, from attacks against the media to smear campaigns against civil society actors. The publication, the third produced by this team, will be disseminated by Watson and Dejusticia.

This conference marks the third time Heller, Garavito, Evans, and other colleagues have come together at Watson. The idea, says Heller, is to foster South-initiated South-North dialogues. “The Global South is driving all kinds of policy innovation and we need to learn from these experiences,” he says. The initiative has resulted in in the publication of two edited volumes: Business and Human Rights: Beyond the End of the Beginning, edited by Rodríguez-Garavito, and Transnational Advocacy Networks: Reflecting on 15 Years of Evolving Theory and Practice. The organizers will publish the papers from the workshop on OpenGlobalRights, the blog of opendemocracy.net.

Recent events such as the car bombing death of Maltese journalist Daphne Caruana Galizia, who was investigating government corruption, give this conference a particular urgency. “In the absence of a ‘Global Department of Justice’ that can enforce a constitution or conventions, you’ve got to come up with something else, and this is where these civil society networks are crucial,” says Heller. “If India doesn’t want to enforce child labor protections, who is going to do it? Well, the activists might be able to do it, but they need allies, and they all need to embarrass the Indian government in the UN and bring media attention to these issues. This time that’s literally what we’re trying to do as well: bring attention to this apparent reversal” away from progress toward human rights.